Overdose Deaths Surged in the First Half of 2021, Underscoring Urgent Need for Action

Syringes and vials of naloxone are shown during a November 30, 2021, tour of the supervised drug-injection site OnPoint, in New York. The city has opened two such sites in the Harlem and Washington Heights neighborhoods in an effort to address the increase in overdose deaths. Photo: Yuki Iwamura/AFP via Getty Images

In 2020, after the start of the COVID-19 pandemic, overdose deaths jumped to previously unseen levels and eventually claimed nearly 92,000 lives that year — 21,000 more than in any previous year. Deaths subsided gradually in the second half of the year, but recent data suggest that overdose deaths spiked again during the first half of 2021. Using the most recent overdose mortality data, we look at the situation facing the country, how specific states are faring, and the urgent need to boost treatment and invest in harm reduction, like overdose reversal drugs, as the crisis continues to grow.

Overdose Mortality Reached Record Levels in First Half of 2021

Overdose deaths spiked immediately after the emergence of COVID-19 in 2020 before tapering later in the year. Researchers pointed to increased drug use, riskier use conditions such as isolation amid social distancing restrictions, and a drug supply that has become far more lethal because of synthetic opioids. Data from 2020 showed the highest overdose death rates were among people ages 25 to 54, Black people, and American Indian/Alaska Native people.

The Centers for Disease Control and Prevention (CDC) recently released provisional mortality data through the first half of 2021, and our analysis suggests that overdose deaths spiked again at the end of 2020 back to their highest levels in March 2021 and stayed near that level through June.

The death toll during the first six months of 2021 was an estimated 53,000 people, higher than any continuous six-month period in 2020 and on pace for a new annual record by the end of the year. 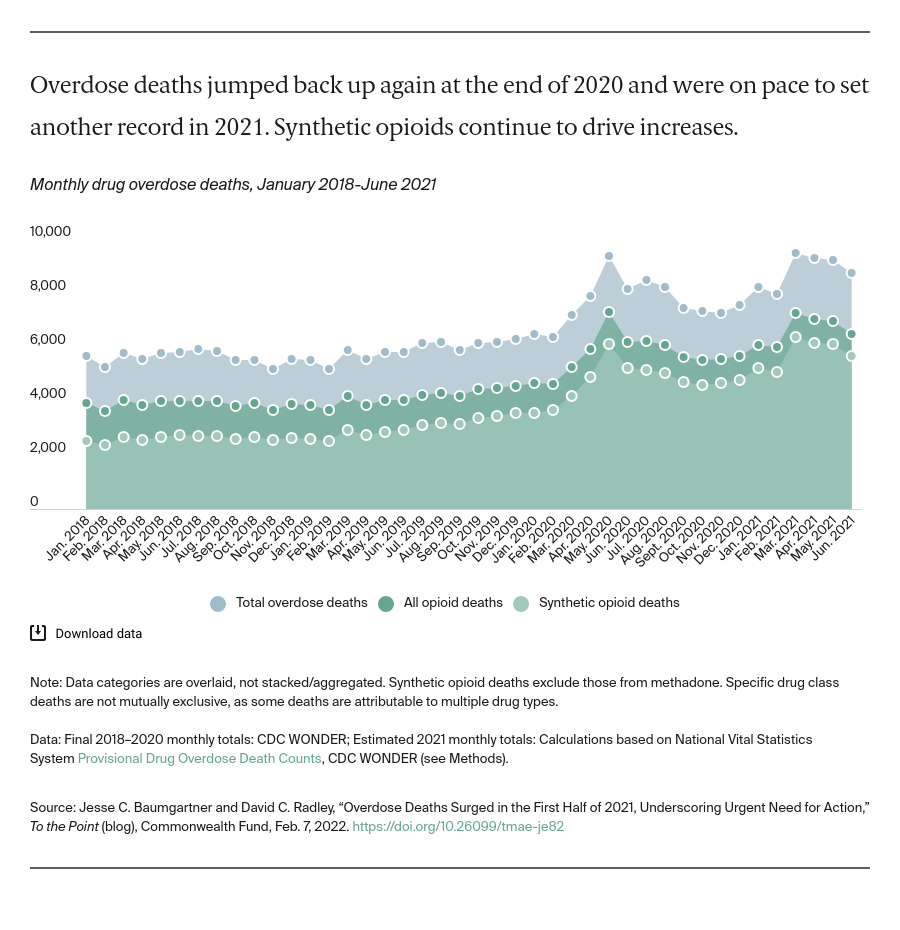 Almost every state reported record overdose deaths in 2020; data from the first half of 2021 indicate many states were on pace for even higher mortality that year.

We compared state estimates of overdose deaths during the first six months of 2021 to the state’s highest total of any continuous six-month period during 2020. Many states appear to have experienced more overdose mortality during the first half of 2021 than in any six-month period in 2020. This includes Oregon, California, and Colorado in the West; Kansas in the Midwest; and Mississippi, Louisiana, Tennessee, and Texas in the South. 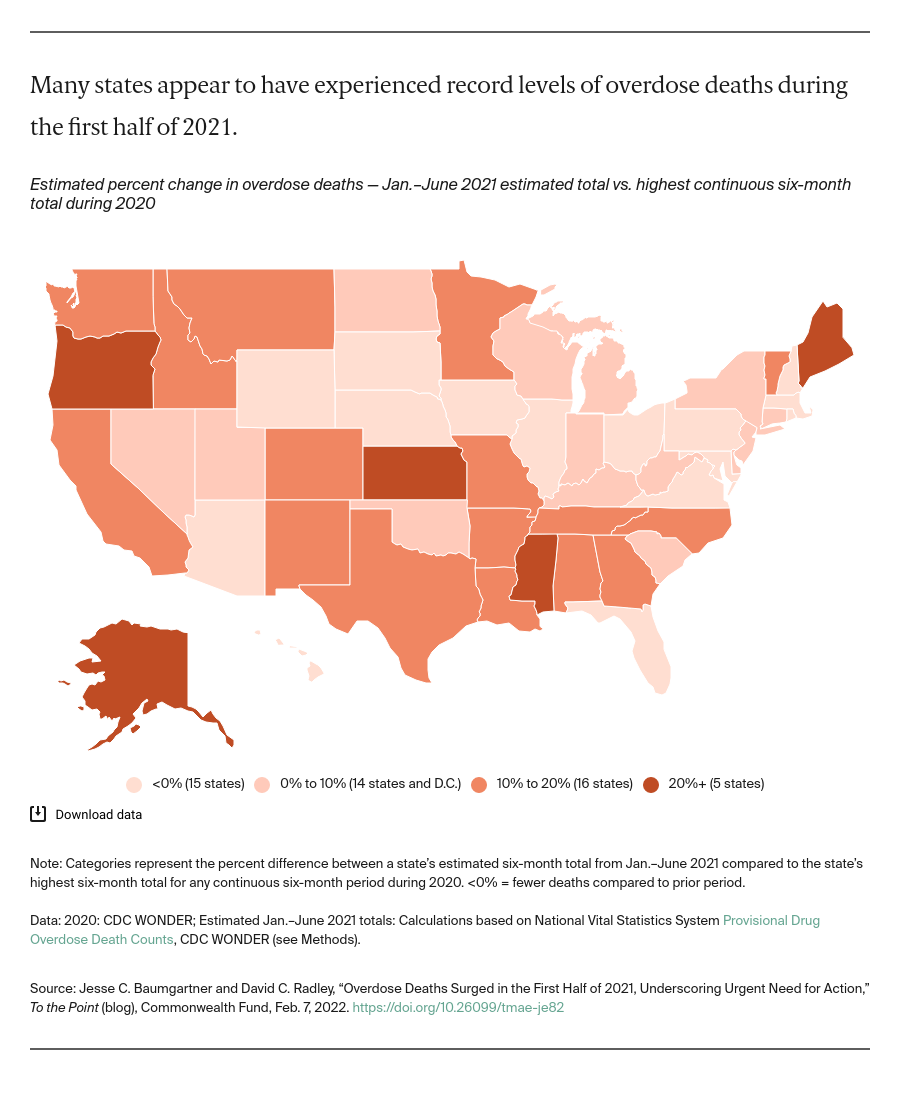 Using the Tools at Our Disposal

Congress has allocated billions of dollars in response to the overdose crisis. This funding is critical for health care and state and local social service providers. But funding will be inadequate without complementary policy changes to improve access to and availability of effective treatment and harm-reduction tools.

Barriers to effective treatment. Recently released federal data show that the vast majority of people with an opioid use disorder are not accessing medication-assisted treatment (MAT) options like methadone or buprenorphine that significantly reduce overdose risk. 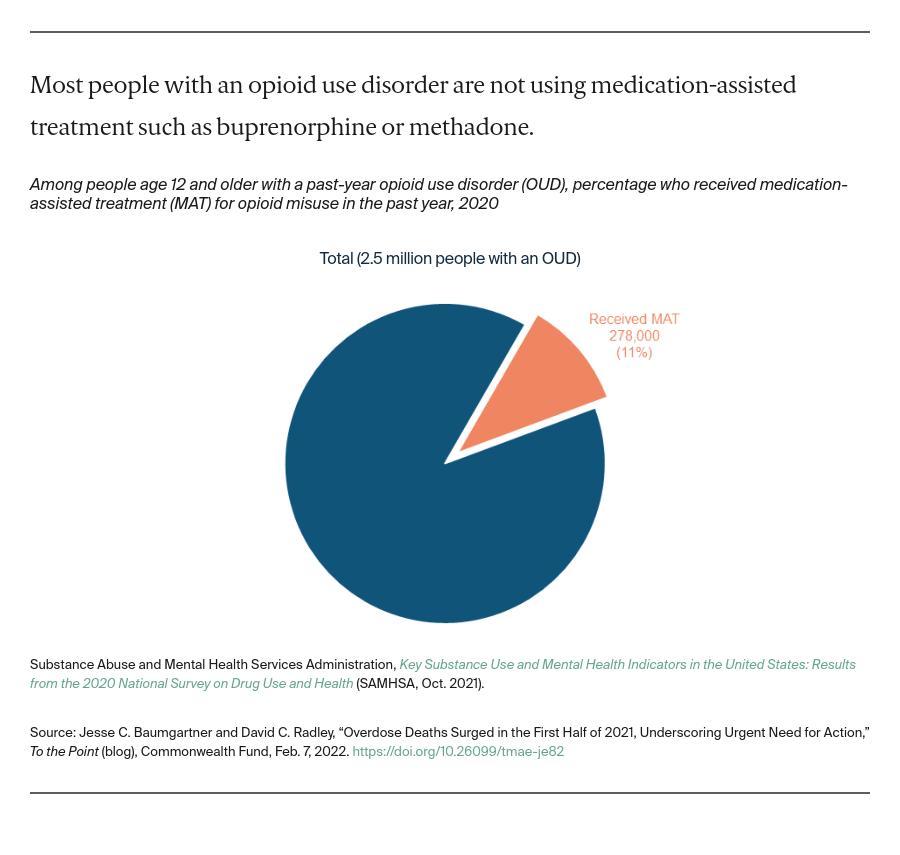 A range of barriers contributes to that low treatment rate. People can encounter insurance restrictions like prior authorization or providers who accept out-of-pocket payment only. Many substance-use treatment providers do not offer MAT or curtail its use. This includes many criminal justice facilities. Too few providers can prescribe treatment, and they face strict federal rules that limit patient counts and require in-office visits.

Resistance to harm reduction. The opioid overdose reversal drug naloxone, syringe-service programs, and fentanyl test strips are examples of effective harm-reduction tools that can mitigate the risk of overdose and lower the risk of death if an overdose occurs. New York City is piloting supervised drug consumption sites that provide a lower-risk environment and connect people to treatment.

But these lifesaving tools continue to be underutilized and resistance remains strong in many areas of the country, as evidenced by the recent shuttering of syringe-service programs in high-need regions.

Progress against the overdose crisis will require bold changes that minimize barriers to effective treatment and maximize safety for people who use drugs. With a potential 100,000 or more lives lost in 2021, we need policies aimed to meet the urgency of the moment.

There continues to be federal attention to the issue, as evidenced by a recent government commission report which recommended wide-ranging strategies and a cabinet-level drug policy position to address the growing impact of synthetic opioids. Federal officials can further enhance access to MAT by finalizing flexible rules for providers administering treatment and requiring insurance companies to cover medication without barriers. Federal funding could increase for state and local harm-reduction programs.

States also have an opportunity — the 12 that have yet to expand Medicaid could do so, increasing access to care for many patients with substance-use disorders. States also can remove MAT prior authorization requirements from their Medicaid programs, make it easier for nonphysicians to prescribe treatment, and prioritize the expansion of harm-reduction programs in underserved areas.

In the second exhibit, state estimates for total overdose deaths between January and June 2021 are based on calculations using final July–December 2020 data for each state and the June 2021 provisional predicted 12-month total. To account for potential differences in state-level provisional predicted deaths, we adjusted the 12-month totals by the average percentage difference between a state’s final annual totals and its December 12-month predicted totals from 2017 to 2020. We compared this six-month total to the highest overdose death total that a state had over any continuous six-month period during 2020 using the CDC’s final 2020 data.