COVID-19 infections due to the Omicron variant are sweeping across the United States. Even if Omicron causes less severe disease than earlier variants, the explosive spread of infections threatens to drive hospitalizations and deaths to unprecedentedly high levels, swamping already overburdened hospitals and health care workers. Hospitalizations are occurring mostly among the unvaccinated but also among people whose immunity from primary vaccination or previous infection has waned.

The surge demands an immediate policy and public health response to “flatten the curves” of hospitalizations and deaths. However, few interventions other than disruptive travel restrictions and business and school closures will break transmission of the virus quickly enough. One tool that can be deployed rapidly is booster vaccination. Boosters reinforce the wall of immunity built by previous vaccination and prior infection. Boosters appear to be highly effective at preventing severe illness and hospitalization. While 88 percent of Americans 65 and older have received their first two doses, only 60 percent have received a booster. During December the daily pace of booster vaccination was approximately 770,000 doses.

We used a previously developed simulation model to forecast the reduction in COVID-related deaths and hospitalizations that could be achieved by accelerating the current daily pace of booster vaccination between January and the end of April. The model analyzes features of the coronavirus, along with its transmission and effects, to project the trajectory of infections, hospitalizations, and deaths. It incorporates dynamics of SARS-CoV-2 variants, including Omicron. It accounts for waning immunity and changes in population behavior over time as schools and businesses have reopened and travel has increased. The model is refined as new scientific evidence emerges. Further details are available here. 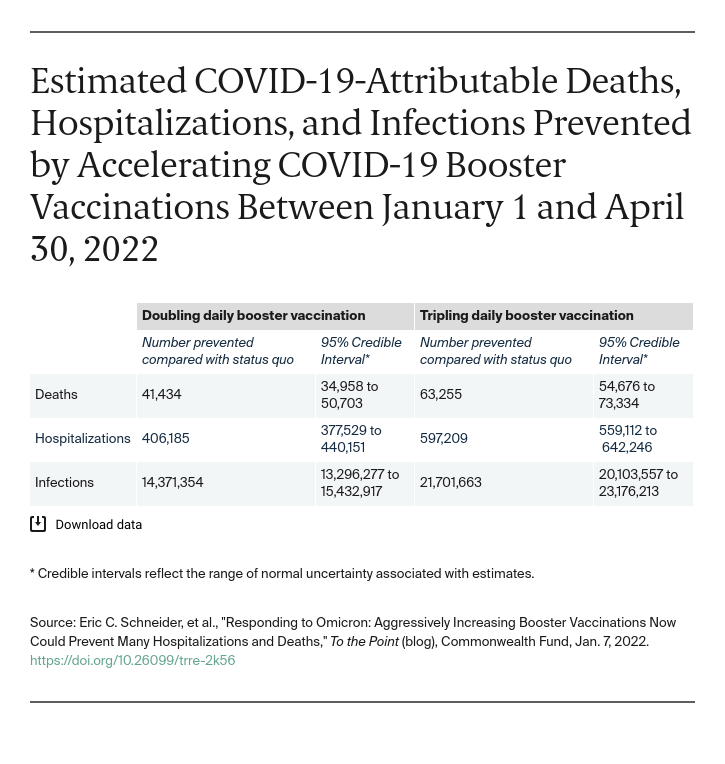 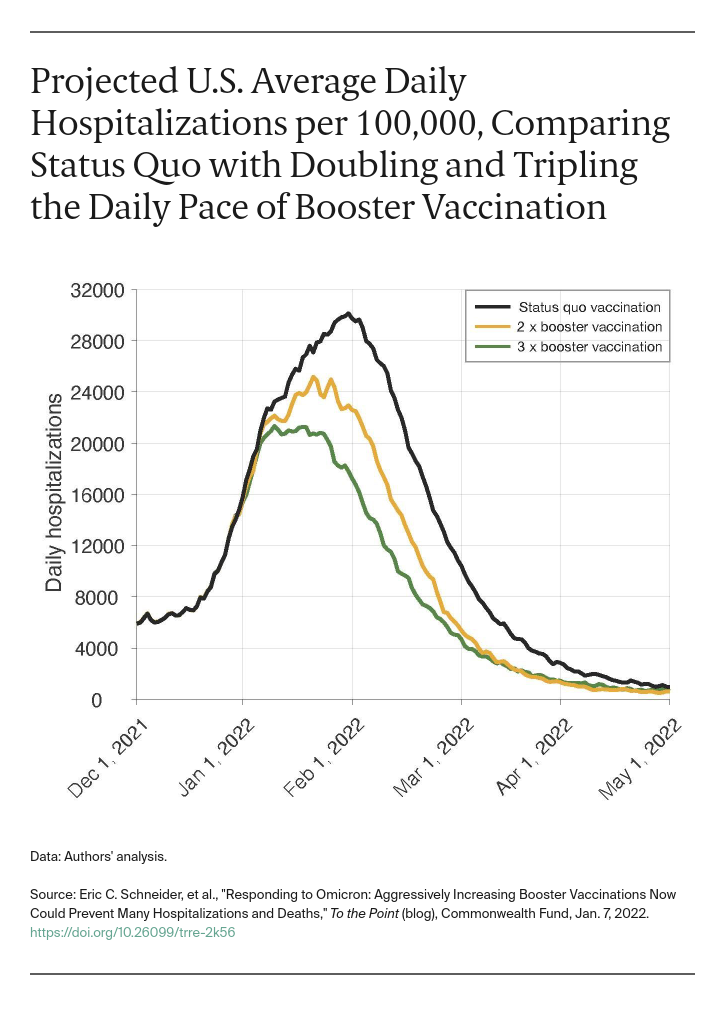 While the Omicron variant is posing a new threat to overburdened hospitals and health care workers, rapidly increasing the pace of booster vaccination could blunt its impact. Tripling the pace of booster shots could reduce the expected number of COVID-19 deaths by nearly 30 percent and expected number of hospitalizations by more than 35 percent between now and the end of April.

Tripling the pace of booster vaccination to 2.3 million doses is achievable. During early 2021, the U.S. administered more than 2 million doses of COVID-19 vaccine daily for almost three months. The federal government has already mobilized additional vaccination capacity, including 10,000 more vaccination sites across the country (for a total of 90,000 sites). It is launching mobile vaccination clinics through the Federal Emergency Management Agency and community health centers are hosting “family vaccination days.”

The U.S. vaccination campaign has already profoundly altered the trajectory of the pandemic, preventing nearly 1.1 million deaths. But new variants combined with waning immunity require sustained efforts. A booster vaccination is effective at reversing an individual’s waning immunity in a matter of days. As Omicron spreads, our findings highlight the urgent need to administer boosters as quickly as possible to everyone who is eligible.