Gina Flores helps Theresa Bedford sign up for a free mammogram during a health fair at Babylon Town Hall in Lindenhurst, N.Y., on Oct. 4, 2022. The Affordable Care Act’s preventive care, no cost-sharing provision is in jeopardy after parts of it were invalidated by a Texas federal court judge. Photo: John Paraskevas/Newsday RM via Getty Images

In September, a Texas federal court judge invalidated parts of a popular Affordable Care Act (ACA) provision that guarantees millions of people access to preventive services with no cost sharing. The provision requires most insurance plans to cover more than 100 critical preventive services like immunizations, cancer screenings, and well-woman visits with no copayments, coinsurance, or deductibles. The number of covered services has grown over time. The preventive HIV medication pre-exposure prophylaxis (PrEP) and various forms of birth control are now included.

The ruling, which concerns a subset of preventive services, including PrEP, contraceptives, and those recommended by the U.S. Preventive Services Task Force (USPSTF) including colorectal cancer screenings, has yet to have a nationwide impact as the judge seeks additional information before making a final determination. But if the ruling is eventually upheld by the Supreme Court or is expanded to cover all preventive services included in the ACA provision — something the current bench may be amenable to — progress made on health and well-being in the past decade will be in jeopardy.

The ACA’s preventive care, no cost-sharing provision applies to most private insurance plans. The law also applied the policy to people who became eligible for Medicaid under state expansion programs, as well as to a specific subset of preventive services covered under Medicare. Preventive services can reduce premature deaths and the incidence of disease while mitigating the need for more serious health interventions in the future through early detection.

Along with ACA provisions that expanded insurance coverage, this provision has both reduced the share of patients facing cost sharing and increased the use of some preventive services. The health and social well-being of many have been positively impacted by these changes.

A recent comprehensive review of preventive care trends found that use of certain services increased after the ACA, including long-term, reversable, and oral contraceptives; Medicare wellness visits; vaccinations for the human papillomavirus among women; and colorectal cancer screenings.

PrEP, one of the specific preventive services being debated in the federal lawsuit, was added as a covered service in 2021. Researchers expect use to increase, assuming the case decision does not limit access, especially among Black and Hispanic patients whose access has historically been limited despite their disproportionate risk for contracting HIV.

Losing the Preventive Service Provision Could Impact Millions of Americans

If the ACA’s preventive care provision is eliminated through the federal courts, insurers could again require cost sharing for these critical services. Many insurers would likely continue covering some services without cost sharing, as they did prior to the ACA. But it’s likely that a substantial portion of Americans could once again have to pay out of pocket for any number of these services, depending on their coverage source.

Most private plans are not regulated by states (e.g., self-insured employer plans) and would individually determine if preventive services would be covered without cost sharing. Conversely, states do regulate a smaller number of individual market and fully insured private plans and could still require them to cover preventive services without cost sharing. Currently at least 15 states have laws requiring individual market plans to do so.

While current litigation is focused on private insurance, a decision eliminating the requirement also could eventually impact people in Medicaid expansion plans and Medicare beneficiaries, dependent on the coverage decisions of individual states and future administrations.

More than an estimated 230 million people are currently in private (151 million), Medicare (61 million), or Medicaid expansion (20 million) plans, which are required by the ACA to cover at least some preventive services with no cost sharing. The impact of future rulings may be felt unevenly across the country. At least 5 million people in 16 states, including Texas where the case is being considered, could be at risk of paying for preventive services again. 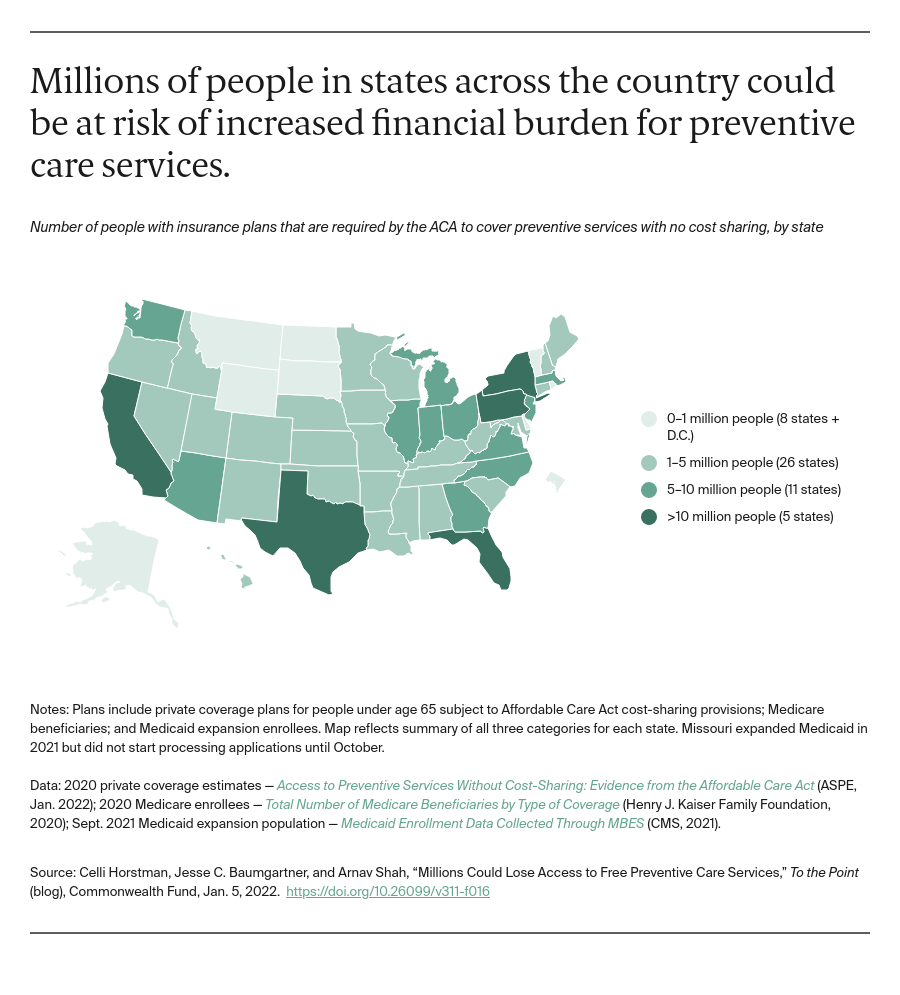 Repeal Would Push Preventive Care Out of Reach for Many

Striking down the provision would likely cause fewer people to use preventive services. This would have an outsized impact on the 32 percent of insured adults who have reported delaying nonpreventive care because of costs. If they cannot afford to address acute health concerns, they are likely to forgo accessing necessary but less urgent preventive services.

While the status of the court case has created uncertainty around the future of the provision, it is clear the loss of access to free preventive services could adversely affect the health and well-being of millions.