Sunrise over Denver. The “Colorado Option” launched this winter, requiring insurance carriers in the state to offer gold, silver, and bronze tier public option plans in all counties where they offer individual or small-employer plans.

Traditionally, a “public option” has been envisioned as a government insurance plan offered to compete against private health insurance. Under this model, the government administers the plan and bears the risk of any claims.

More recently, the phrase “public option” has been adapted to include proposals like the laws discussed here where a state contracts with or requires private insurers to introduce new plans into the market for which the private insurer bears the financial risk. Like traditional public options, these new plans are intended to compete in the private market and expand consumer choice, with greater public influence over plan premiums, benefits, and networks for the new plan options relative to existing private plans.

For the 2023 plan year, with this new requirement in effect, seven carriers submitted bids to offer public option plans. Most proposed to be in 10 or more counties. Ultimately, Washington contracted with three carriers offering plans in 34 of 39 counties, enabling access to 98 percent of current marketplace customers.

According to Washington Health Benefit Exchange Board meeting materials, Washington’s selective procurement of carriers was motivated by concerns that state residents face “choice overload” and that contracting with all bidders would risk further “crowding” the individual market “without affordability or market competition gains.” Washington chose carriers that offered the best combination of geographic coverage and lower premiums relative to the competition. Looking ahead, Washington plans to continue use selective contracting with carriers to further lower premiums and improve quality.

Colorado Option plans are required to meet certain premium rate reduction targets and health equity–focused network requirements. While not all plans are on target to meet the premium reductions for 2023, the state estimates that 87 percent of current individual market enrollees will be able to enroll in a plan reaching this target. Beginning in 2024, noncompliant plans will face a public hearing to determine whether one or more health care providers prevented them from complying by refusing to agree to lower reimbursement rates. If the state insurance commissioner finds this to be so, the commissioner can order the providers to join the Colorado Option plan network at state-set reimbursement rates.

Nevada’s Approach Is Still to Be Determined

The state maintains discretion over how many carriers it will select. Because state law requires the state to maximize alignment between the new public option and Medicaid, and federal law requires state Medicaid managed care programs to offer beneficiaries plan choice, the state likely will contract with at least two carriers.

Nevada plans to solicit stakeholder input on procurement and contracting in the spring of 2023. Its procurement process is expected to begin in late 2024, in conjunction with its next Medicaid managed care procurement. 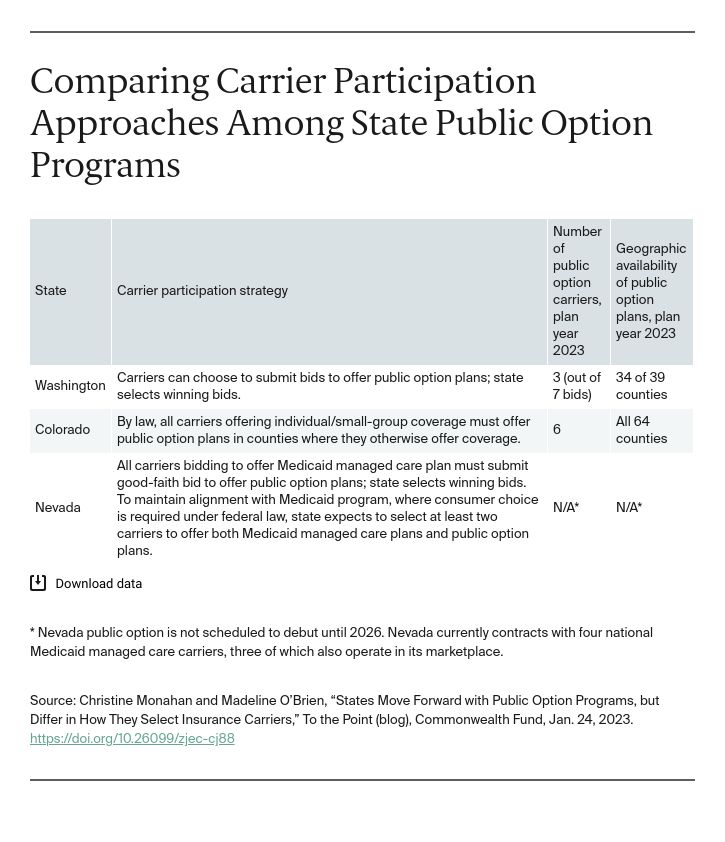 Deciding how to involve private carriers in public option plan administration raises many issues that state-based marketplaces have been facing for years, including whether to require carriers to participate and engage in active purchasing or selective contracting. States that partner with private carriers to offer public options are likely to reach different answers based on their market conditions. As more states consider public option legislation, leaders can look to the differing experiences across early adopters to inform their decision-making.