New Study: Low-Income People Are More Likely to Have Insurance and Be Able to Afford Health Care in States That Expanded Medicaid Eligibility, Regardless of State Approach

New York, NY, January 5, 2016—Low-income adults in Kentucky and Arkansas, which both expanded Medicaid eligibility under the Affordable Care Act, were more likely to be insured and to report fewer problems paying medical bills or skipping prescriptions because of cost than adults in Texas, which did not expand coverage, according to a Commonwealth Fund-supported study released in Health Affairs today. Despite the fact that the expansion states used different methods to offer coverage to more people (traditional Medicaid in Kentucky versus private insurance in Arkansas), adults in both states saw greater increases in coverage rates and ability to afford needed health care compared to adults in the non-expansion state. 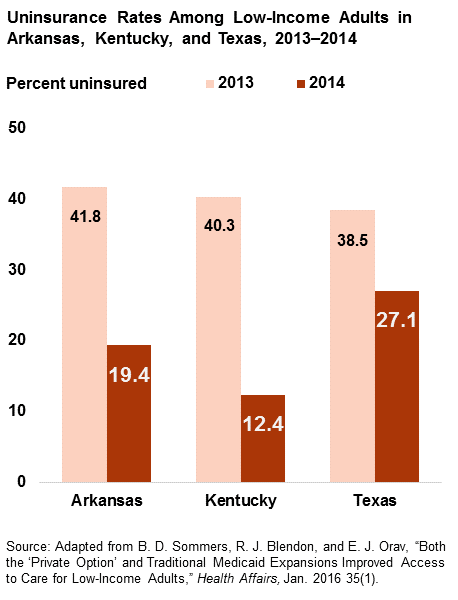 The study, conducted by Benjamin Sommers, Robert Blendon, and E. John Orav at Harvard University, compared the health care experiences of low-income adults in Kentucky, Arkansas, and Texas in late 2013 and again 12 months later. Arkansas expanded Medicaid by using federal funds to purchase private health insurance for enrollees through the ACA’s marketplaces, while Kentucky expanded eligibility through its traditional Medicaid program. Texas did not expand its Medicaid program.

The survey of more than 5,600 low-income adults found that:

“This study provides evidence that expanding Medicaid eligibility matters more than how it is expanded, on most indicators,” said Commonwealth Fund President David Blumenthal, M.D. “As states that have not yet taken steps to expand their programs weigh their options, these findings demonstrate the value of Medicaid in making health care more accessible and affordable. New approaches to expanding Medicaid should be monitored to ensure these goals are being achieved.”