The Income Divide in Health Care: How the Affordable Care Act Will Help Restore Fairness to the U.S. Health System 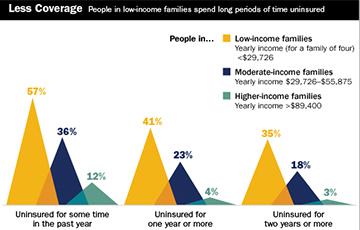 The new Commonwealth Fund Health Insurance Tracking Survey of U.S. Adults finds nearly three of five adults in families earning less than 133 percent of the federal poverty level were uninsured for a time in 2011; two of five were uninsured for one or more years. Low- and moderate-income adults who were uninsured during the year were much less likely to have a regular source of health care than people in the same income range who were insured all year. In addition, uninsured lower-income adults were more likely than insured adults in the same income group to cite factors other than medical emergencies as reasons for going to the emergency room. These included needing a prescription drug, not having a regular doctor, or saying that other places cost too much. The Affordable Care Act will substantially narrow these inequities through an extensive set of affordable coverage options starting in 2014.