Covering Young Adults Under the Affordable Care Act: The Importance of Outreach and Medicaid Expansion

There is concern that many young adults (ages 19–29) will remain without health insurance in 2014 despite the Affordable Care Act’s reforms, including subsidized private coverage offered in new state marketplaces and expanded Medicaid eligibility. How things turn out will likely depend on outreach efforts and states’ decisions on expanding Medicaid. Commonwealth Fund Health Insurance Tracking Survey data from 2011 and 2013 show increasing awareness among young adults of the 2010 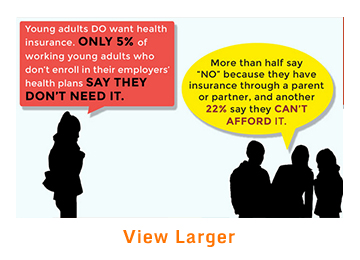 requirement that health plans cover children under age 26. Of the estimated 15 million young adults enrolled in a parent’s plan in the prior 12 months, 7.8 million would not likely have been eligible to enroll prior to the law. Still, only 27 percent of 19-to-29-year-olds are aware of the marketplaces. Meanwhile, most uninsured young adults living below poverty will not have access to subsidized public or private insurance in states opting out of the Medicaid expansion.