In States' Hands: How the Decision to Expand Medicaid Will Affect the Most Financially Vulnerable Americans

Between 2010 and 2012, nearly one-third (32%) of U.S. adults ages 19 to 64, or an estimated 55 million people, were either continuously uninsured or spent a period of time uninsured. Data from the 2011 and 2012 Commonwealth Fund Health Insurance Tracking Surveys of U.S. Adults show that people with incomes below 133 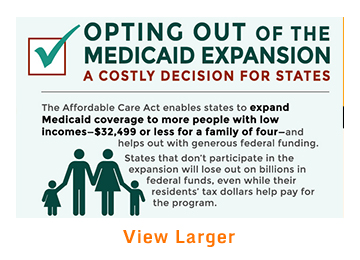 percent of the federal poverty level (i.e., the level that will make them eligible for Medicaid in 2014 under the Affordable Care Act) were uninsured at the highest rates. Yet, fewer than half the states are currently planning to expand their Medicaid programs, because the 2012 Supreme Court decision allows states to choose whether to expand eligibility. In those states that have not yet decided to expand, as many as two of five (42%) adults who were uninsured for any time over the two years would not have access to the new coverage provisions in the law.