To Enroll or Not to Enroll? Why Many Americans Have Gained Insurance Under the Affordable Care Act While Others Have Not

According to the most recent Commonwealth Fund Affordable Care Act Tracking Survey, March–May 2015, an estimated 25 million adults remain uninsured. To achieve the Affordable Care Act’s goal of near-universal coverage, policymakers must understand why some people are enrolling in the law’s marketplace plans or in Medicaid coverage and why others are not. This analysis of the survey finds that affordability—whether real or perceived—is playing a significant role in adults’ choice of marketplace plans and the decision whether to enroll at all. People who have gained coverage report significantly more positive experiences shopping for health plans than do those who did not enroll. Getting personal assistance—from telephone hotlines, navigators, and insurance brokers, among other sources—appears to make a critical difference in whether people gain health insurance.

The third open enrollment period for the Affordable Care Act’s health insurance marketplaces begins on November 1, 2015, for coverage beginning January 2016. This will give the estimated 25 million working-age adults who still lack health insurance and are eligible for coverage the opportunity to sign up.1 In addition, people who currently have insurance—either through the marketplaces or the individual market—will need to reenroll during this period if they want their coverage to continue through next year. Some people, however, may choose not to enroll in coverage. To help policymakers increase the number of people with health insurance, it’s important to understand why some people have enrolled while others have not. Earlier research, based on results from the Commonwealth Fund Affordable Care Act Tracking Survey, March–May 2015, identified possible reasons why people remain uninsured, including the fact that 20 states have yet to expand eligibility for Medicaid and a general lack of knowledge among many uninsured adults about the marketplaces and the availability of financial assistance.2 In this latest analysis of the survey, we gain more insight by looking at the experiences of adults who took the first steps toward gaining coverage by visiting the marketplaces but who did not ultimately enroll. Additional findings from the survey can be found in an online tool.

Visiting the Health Insurance Marketplaces and Shopping for Coverage

One-quarter of all U.S. working-age adults had visited a marketplace to shop for health insurance by March–May 2015; even higher rates were reported by young adults and people with low and moderate incomes (Exhibit 1). The share of Latinos who visited the marketplaces climbed significantly over the first two enrollment periods, rising from 19 percent to 27 percent. Nearly half (47%) of adults who went to the marketplaces and shopped for health insurance over the past two years ultimately enrolled in plans: 30 percent said they selected a private health plan, 15 percent enrolled in Medicaid, and 2 percent either did not know their coverage type or refused to respond (Exhibit 2).3 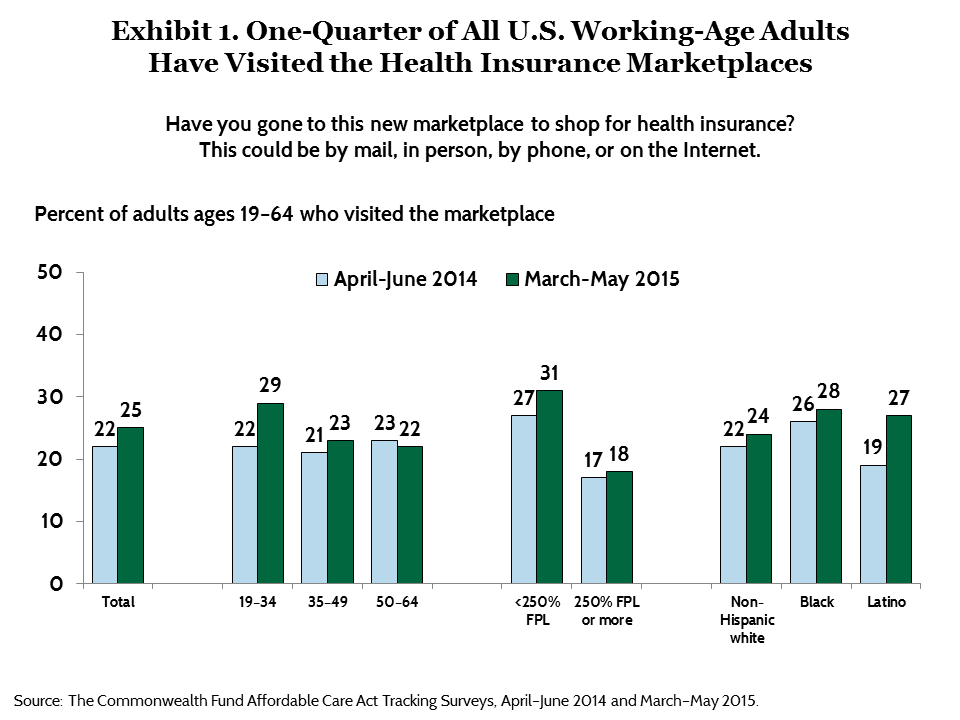 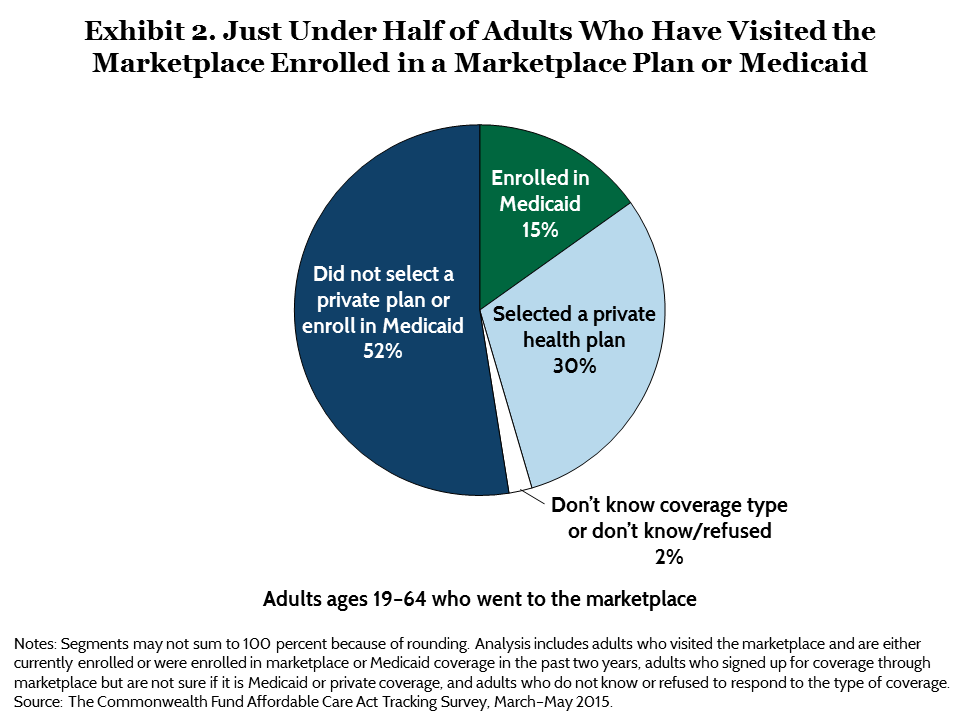 Despite concerns that young adults might not sign up for the law’s coverage options, 19-to-34-year-olds comprise more than one-third (38%) of the current combined enrollment in marketplace and Medicaid plans among working-age adults (Exhibit 3). Young adults represent 31 percent of adult enrollees in the marketplaces, proportionate to their share of the adult population.4 Medicaid has been a critical source of new insurance coverage in this age group: 46 percent of new adult Medicaid enrollees are ages 19 to 34. 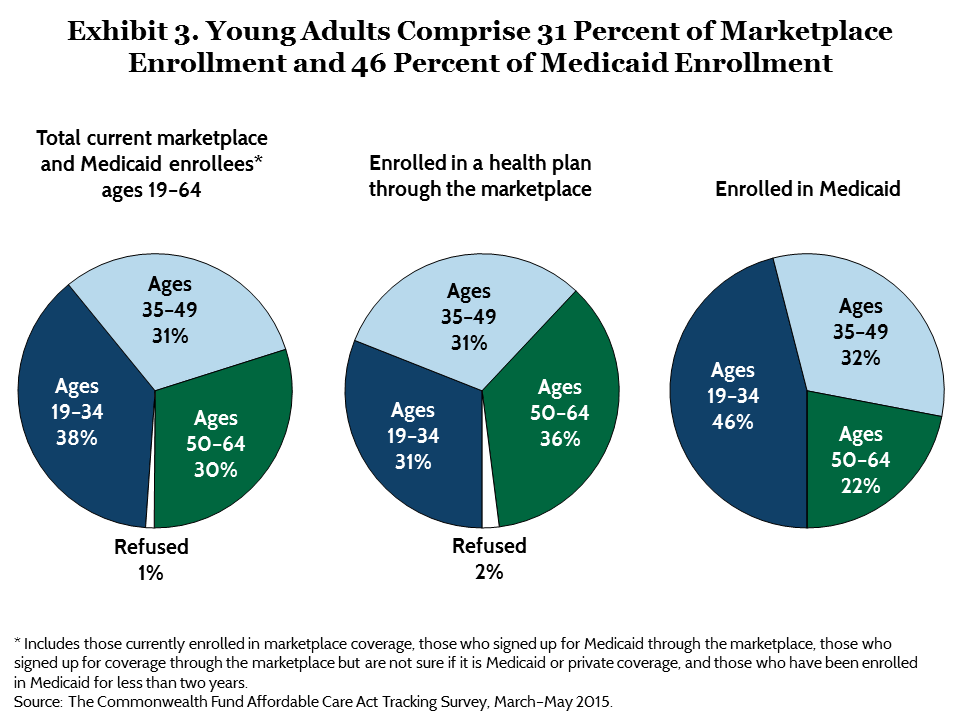 Making the Decision to Enroll

In this analysis, we examine the decision-making of people who enrolled in marketplace plans or Medicaid compared with those who did not enroll. Going forward we refer to these two groups “enrollees” and “nonenrollees.”

Premiums and out-of-pocket costs figured most prominently in decisions regarding choice of marketplace plan. Two-thirds (66%) of adults who either had enrolled in private plans through the marketplace for the first time or switched health plans in the most recent open enrollment period said that the amount of the premium (41%) or the amount of the deductible and copayments (25%) was the most important factor in their decision (Exhibit 4). A smaller share of adults (22%) said that having their preferred doctor, health clinic, or hospital included in the plan’s network was the most important reason. In a companion issue brief, we examine reported premium costs and deductibles by adults with marketplace plans. 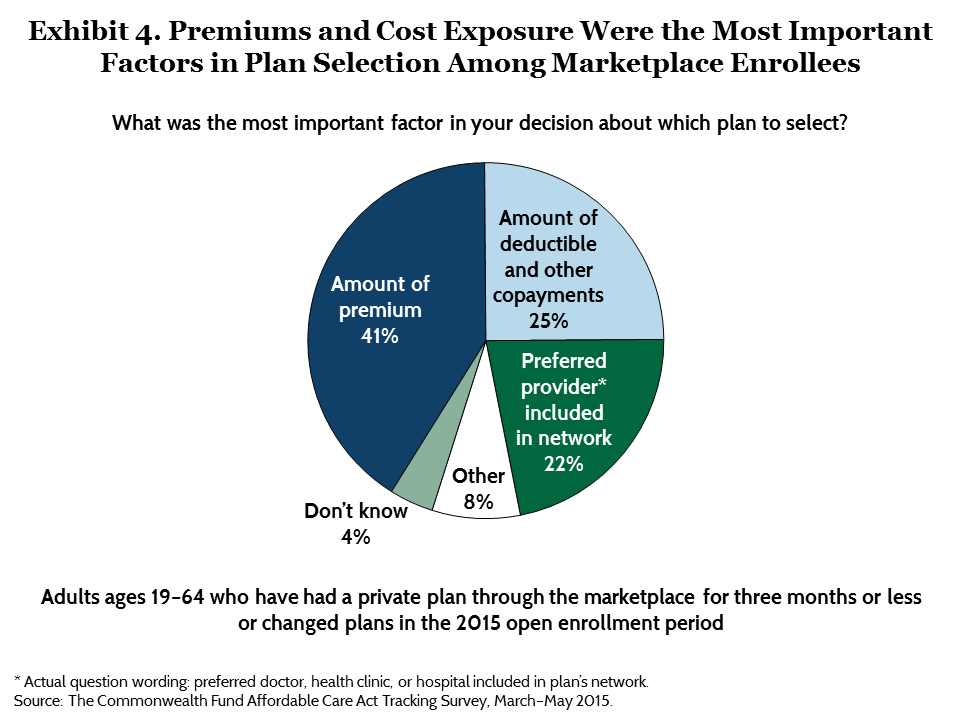 Consistent with these findings, many adults opted for a limited network of doctors and hospitals in exchange for lower premiums. Among people who either enrolled in a marketplace plan for the first time or changed plans in the most recent open enrollment period, more than half (53%) said they had the option of choosing a less expensive plan featuring fewer doctors or hospitals (Exhibit 5). Of those, more than half (54%) selected the limited-network plan. 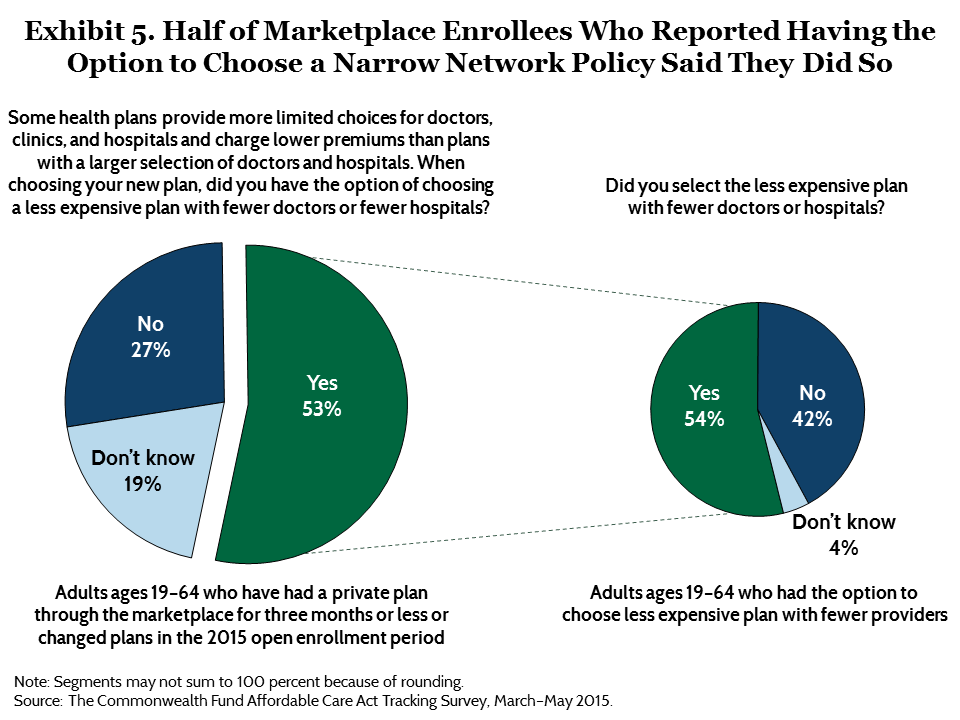 We asked adults who had visited the marketplaces but did not enroll in a marketplace plan or Medicaid about their reasons for not enrolling; respondents could select more than one response. Half (51%) of nonenrollees said they did not enroll because they ultimately found health insurance through another source (Exhibit 6). These may have been people with changes in life circumstances such as a job loss or divorce, who shopped for insurance but ended up getting covered in another way. 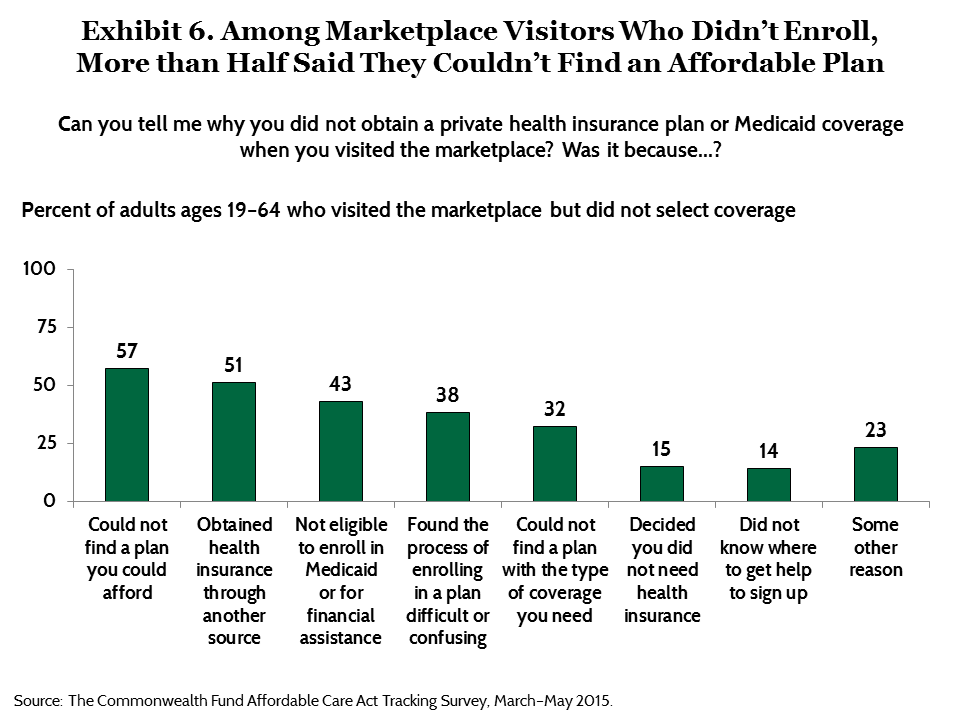 Other adults who did not enroll were overwhelmed by the process. About four of 10 adults (38%) who did not sign up for coverage said they found the process of enrolling difficult or confusing.11

We compared the shopping and enrollment experiences of enrollees and nonenrollees. In the analysis we excluded those who told us they had enrolled in another source of coverage from the group of nonenrollees.

Receiving personal assistance appears to make a significant difference in whether a person signs up for coverage. People with incomes in the range that made them eligible for subsidies, those who are part of racial and ethnic minority groups, those with a high school education or less, and older adults were the most likely to report they had received personal assistance such as from a telephone hotline, insurance broker, navigator, or some other source (Appendix Table 1). When we controlled for demographic differences, 78 percent of adults who said they had received assistance enrolled in a marketplace plan or Medicaid (Exhibit 7).12 In contrast, only 56 percent of those who did not receive personal assistance ultimately enrolled. 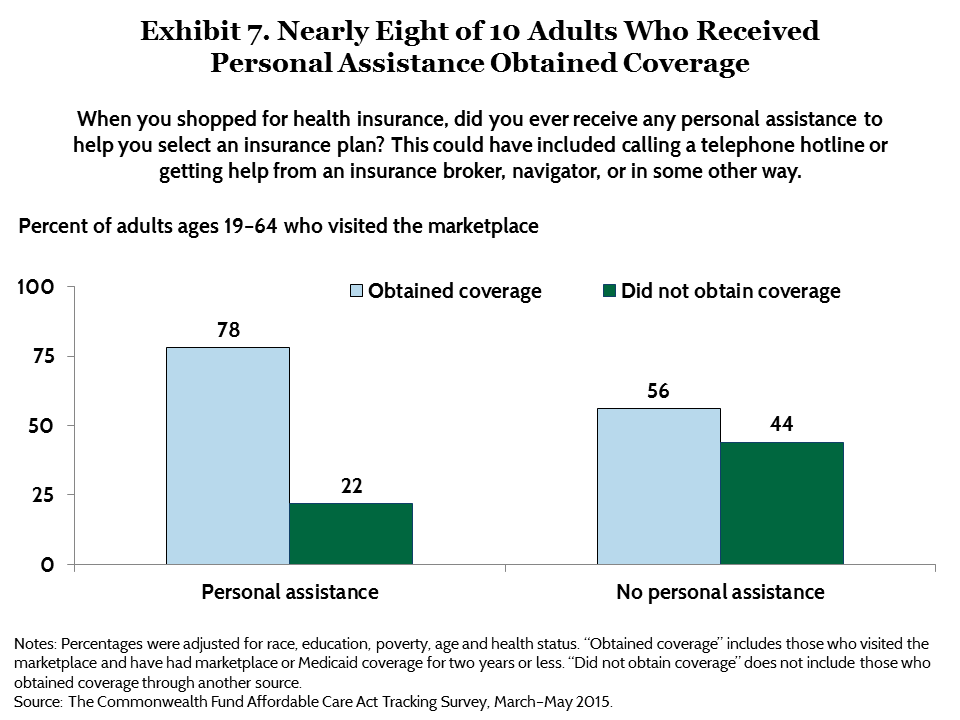 Visitors to marketplace websites in most states encounter an array of health plans that differ by premium cost, copayments and deductibles, and covered providers.13 Health care services covered by plans should be largely the same because each must cover the same essential health benefits, as required by the law. We asked people who visited the marketplaces how difficult or easy it was to compare health plans on the basis of premium costs, benefits covered, out-of-pocket costs, and provider networks.14 Looking only at adults who had incomes above the threshold that made them eligible for marketplace plan subsidies, those who enrolled were significantly more likely than those who did not to report an easy time identifying differences among plans on those dimensions (Exhibit 8).15 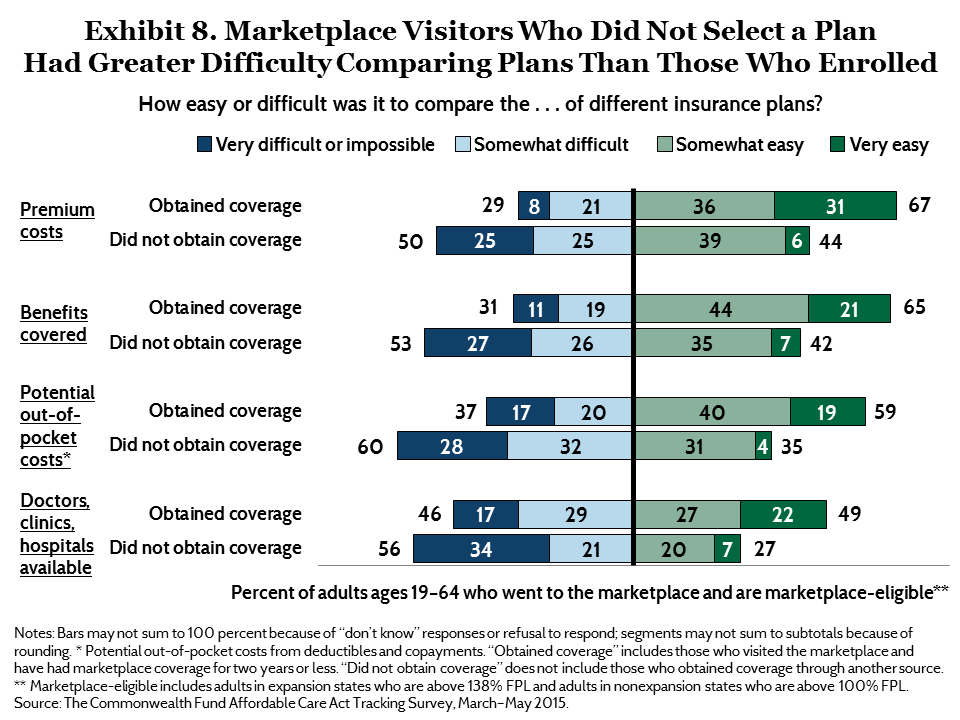 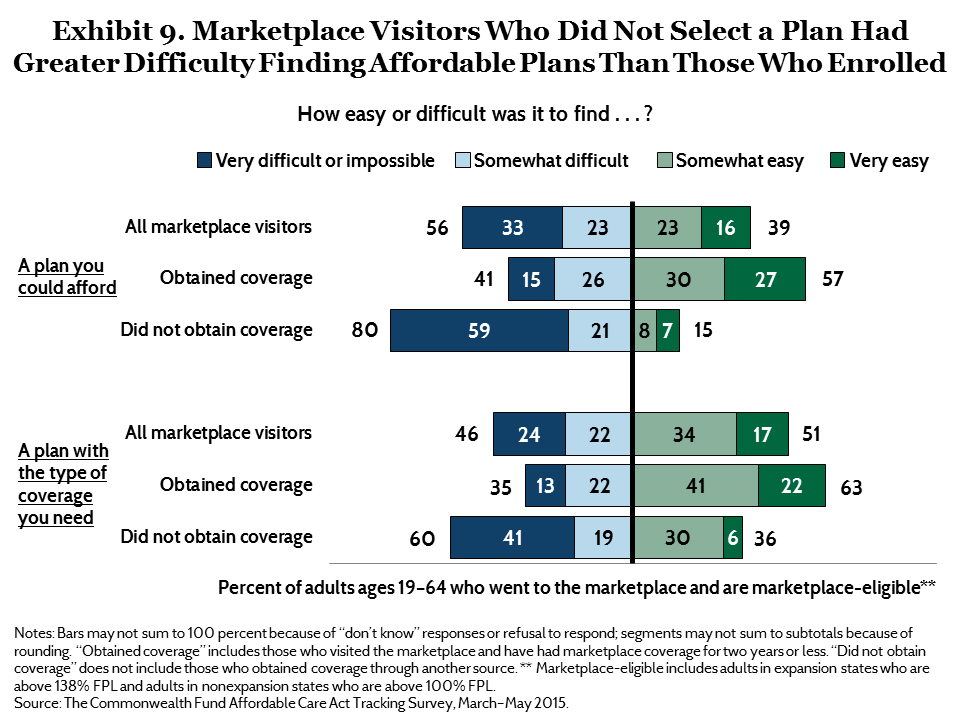 People who ultimately enrolled in either Medicaid or a marketplace plan were significantly more likely than those who did not to give high ratings to their overall experience. More than half (52%) of adults who obtained coverage rated their experience as good or excellent compared with 18 percent of those who did not enroll (Exhibit 10).17 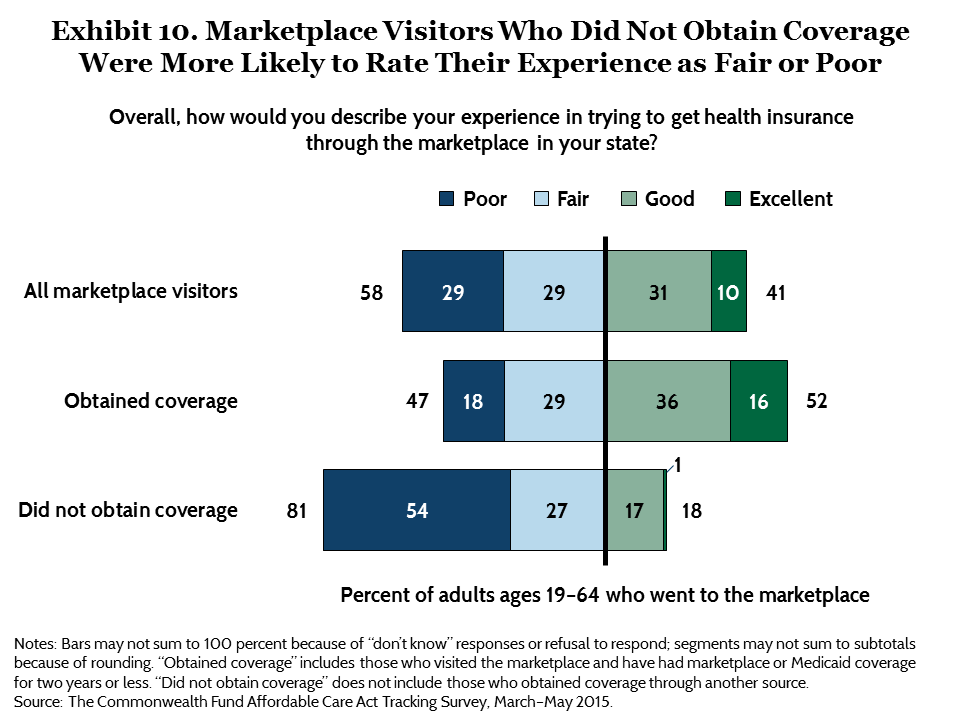 The survey findings suggest strategies policymakers might pursue to continue to reduce the number of Americans who lack health insurance.

Affordability was a primary reason nearly 50 million Americans lacked health insurance before the Affordable Care Act and it clearly remains a top concern for people seeking coverage today.18 One startling finding is the fact that among those adults who said they did not enroll because they could not find an affordable plan and did not enroll through a different source, more than half (54%) had incomes that made them eligible for subsidies. It is unclear whether the subsidies are insufficient across income levels to help all those eligible enroll or whether there is a lack of clear information about the subsidy assistance and the actual net costs of insurance to potential enrollees.

The implications of this latter problem—that many people may not have the information they need to help them buy coverage on their own—are evident throughout the survey findings. For example, compared with people who enrolled, those who did not ultimately enroll had much greater difficulty comparing plans based on premium costs, potential out-of-pocket costs, provider network, and benefits covered.

The findings also suggest that getting assistance during the enrollment process may have helped people better understand the trade-offs between their health plan choices. We find that receiving personal assistance or not during the enrollment process made a significant difference in whether people signed up for coverage. Other recent research also has found that navigators and other types of assisters are powerful predictors of successful enrollment.19

Finally, the decision by 20 states not to expand eligibility for Medicaid is keeping people from gaining coverage. More than a quarter (26%) of adults who shopped for health insurance in the marketplaces and cited affordability as a reason for not enrolling likely fell into the Medicaid coverage gap. For low-income adults in these 20 states, the inability to afford health insurance remains a reality.

Appendix Table 1. Demographics of Adults Who Visited the Marketplace
and Received Personal Assistance

2 At the time the survey was conducted, 22 states had not yet expanded eligibility for their Medicaid programs. Since the survey, two states (Alaska and Montana) have moved forward with plans to expand eligibility. Collins, Rasmussen, Doty, and Beutel, Americans’ Experiences with Marketplace and Medicaid Coverage, 2015.

3 About 1 percent of adults who visited said they enrolled but did not know what type of coverage they had.

5 Of the group who said they did not enroll because they couldn’t find an affordable plan, 38 percent said they found coverage through a different source (data not shown). The sample size for this analysis was 290.

7 It is possible that some adults in this income range may have been eligible for coverage under their state’s existing Medicaid program.

8 Of those who didn’t think they were eligible for subsidized coverage or Medicaid, 40 percent found coverage through a different source (data not shown). The sample size for this analysis was 231.

10 Undocumented immigrants are not eligible for either the law’s Medicaid expansion or marketplace plans. While we do not ask specifically about immigration status in the survey, among those who did not sign up because they said they were ineligible for financial assistance, 14 percent indicate that they were born outside of the United States. However, this measure most likely overstates the number of people who were not eligible because of their immigration status.

11 Forty-one percent of those who found the process difficult or confusing said they found coverage through a different source (data not shown).

12 Adjusted percentages were estimated based on a logistic regression model that controlled for race, education, poverty, age, and health status.

13 Choice of health plans both inside and outside the marketplaces varies both across states and within states. See K. Swartz, M. A. Hall, and T. S. Jost, How Insurers Competed in the Affordable Care Act’s First Year (New York: The Commonwealth Fund, June 2015).

14 For trend data on this question from October 2013–March-April 2015, see our interactive survey data tool.

15 Looking at the full group of visitors to the marketplace, a higher level of education did not appear to make a significant difference in whether people reported that it was very or somewhat easy to compare health plans on these four dimensions.

18 In 2013, 66 percent of the under-65 uninsured population earned less than 200 percent of poverty, or $23,000 for an individual and $47,000 for a family of four. Analysis of the 2014 Current Population Survey by Claudia Solis-Roman and Sherry Glied of New York University for The Commonwealth Fund.