Most employers who provide health insurance to employees subsidize their premiums and provide a comprehensive benefit package. Before the Affordable Care Act, people who lacked health insurance through a job and purchased it on their own paid the full cost of their plans, which often came with skimpy benefit packages and high deductibles. Findings from the Commonwealth Fund Affordable Care Act Tracking Survey, March–May 2015, indicate that the law’s tax credits have made premium costs in health plans sold through the marketplaces roughly comparable to employer plans, at least for people with low and moderate incomes. At higher incomes, the phase-out of the subsidies means that adults in marketplace plans have higher premium costs than those in employer plans. Overall, larger shares of adults in marketplace plans reported deductibles of $1,000 or more, compared with those in employer plans, though these differences were narrower among low- and moderate-income adults.

More than 150 million Americans receive health benefits from employers who substantially subsidize their cost.1 Specifically, employers contribute an average 83 percent of premium costs and most offer plans with comprehensive benefit packages that cover an average 83 percent of employees’ costs.2 Before the Affordable Care Act, people who did not have health insurance through their jobs had to pay the full cost of their premium if they tried to buy it on their own. In addition, if they had preexisting health problems their premium cost could be higher or they could have their conditions excluded from their coverage. As a result, many people had high out-of-pocket costs: more than half of those enrolled in individual market policies in 2010 had plans that covered less than 60 percent of their costs.3 Because of these factors, by 2010, nearly 50 million people were uninsured and 29 million were underinsured.4

The law’s coverage expansions and market reforms were expressly designed to make coverage both affordable and comprehensive for people who lack job-based coverage, especially those with low and moderate incomes who made up the majority of the uninsured and underinsured.5 Currently, about 23 million Americans have health insurance through the ACA’s marketplaces or the Medicaid expansion.6 More than eight of 10 (84%) of the nearly 10 million people enrolled in marketplace plans are paying for their premiums with the help of federal tax credits. More than half (56%) have cost-sharing subsidies that lower their deductibles and copayments.7 All marketplace enrollees have health plans that meet the law’s essential health benefit standard.

This issue brief uses the Commonwealth Fund Affordable Care Act Tracking Survey, March–May 2015, to examine the degree to which the coverage expansions have made health insurance that people buy through the marketplaces as affordable as employer plans. To do this, we compare premium costs and deductibles reported by adults enrolled in marketplace plans to those with employer plans. We also asked people if they think their plans and health care overall are affordable. Additional findings from the survey can be found in an online tool.

Among adults with insurance plans that only covered themselves (i.e., single policies), those with marketplace coverage reported premium costs similar to those with employer coverage. About 60 percent of adults with marketplace coverage and 55 percent with employer plans paid either nothing for their policies or less than $125 per month (Exhibit 1). 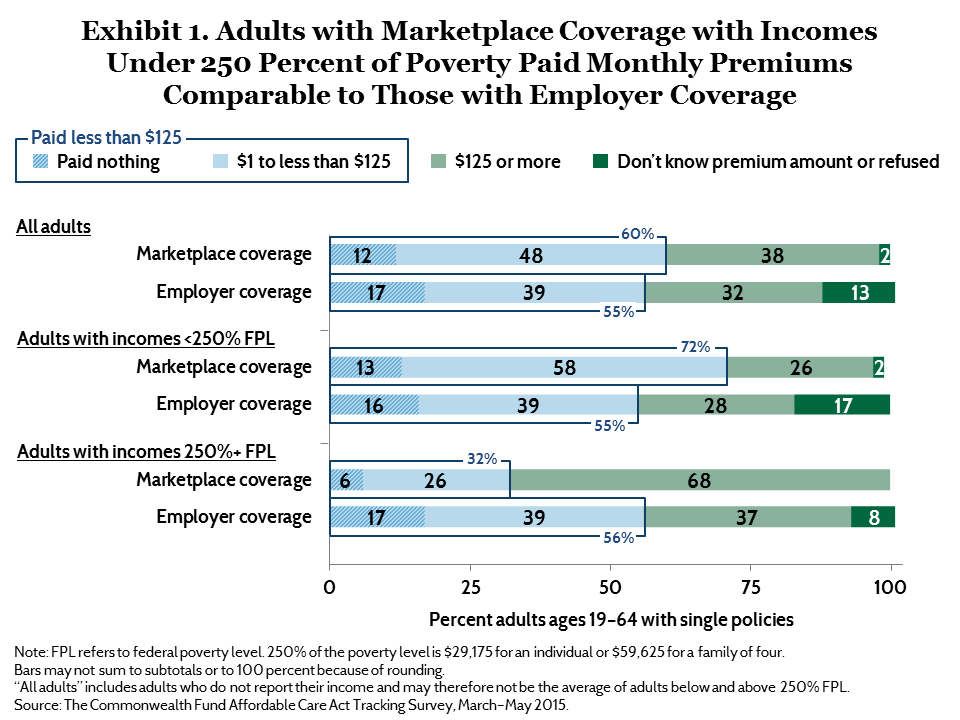 It is important to note that a larger share of adults with employer plans (13%) did not know the amount of their premium costs than did those with marketplace plans (2%).8 This is likely because most people with employer health benefits receive and make premium contributions through their paychecks while those with marketplace plans shop for insurance and pay their premiums directly.

The similarities in premium costs reflect the fact that most people who purchased marketplace plans were eligible for premium tax credits. In the survey, 65 percent of people with marketplace coverage had incomes under 250 percent of the federal poverty level (i.e., less than $30,000 annually for a single person), and were thus eligible for the most generous premium subsidies (Appendix Table 1).9 Seventy-two percent of these adults paid less than $125 a month toward their premiums, including 13 percent who paid nothing.10 Fifty-five percent of adults in this income range in employer plans paid less than $125 per month, including 16 percent who paid nothing.

Perceptions of the Affordability of Premium Costs

Overall, larger shares of adults in employer plans said it was very or somewhat easy to afford the premium costs for their health insurance compared to those with marketplace plans (Exhibit 2). People with higher incomes and employer coverage had the easiest time affording their premiums compared to virtually everyone else in the survey. 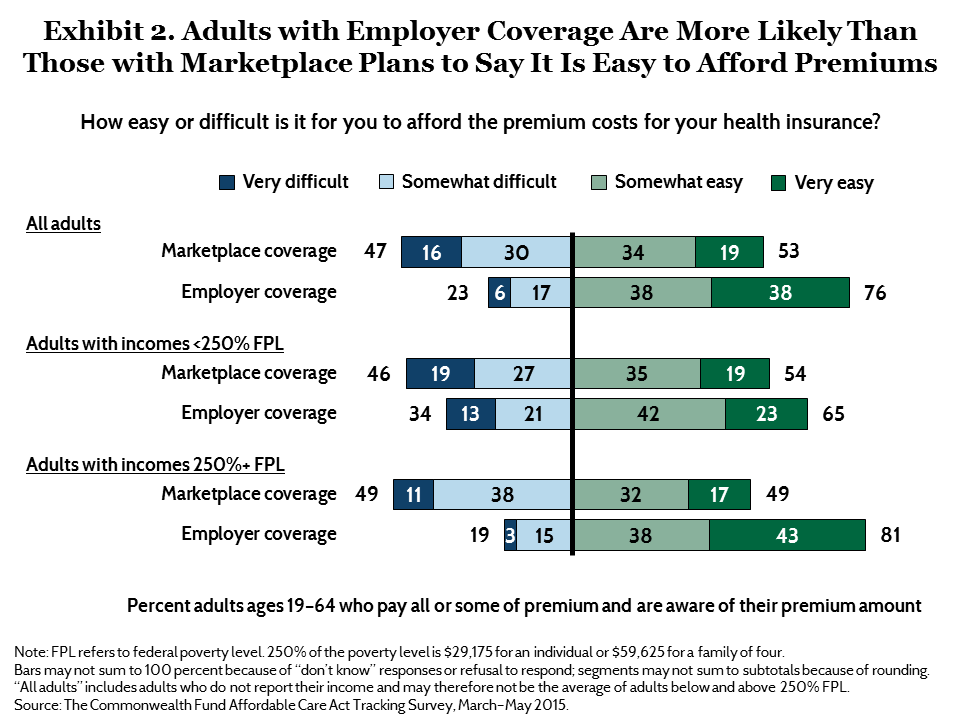 People with incomes between 100 percent and 250 percent of poverty who are enrolled in silver-level marketplace plans are eligible for cost-sharing reduction subsides that lower their deductibles, copayments, and out-of-pocket limits. (See box.) People with incomes from 100 percent to 150 percent of poverty receive the largest subsidies. In 2015, 56 percent of marketplace enrollees had cost-sharing subsidies. In Alabama and Mississippi, the share ranged above 70 percent.11 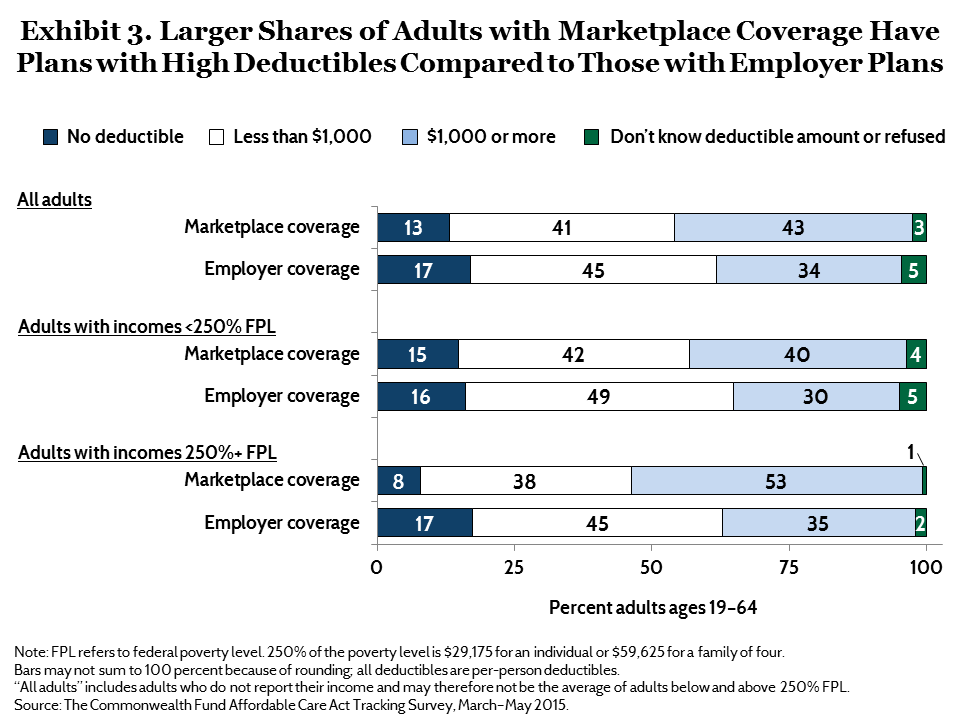 Confidence in Ability to Afford Health Care in the Future

We asked people about their confidence in their ability to afford care if they were to become seriously ill. Majorities of people with marketplace plans (65%) and employer plans (80%) were very or somewhat confident they could afford needed care if they became sick, but larger shares of those with employer plans expressed confidence (Exhibit 4). 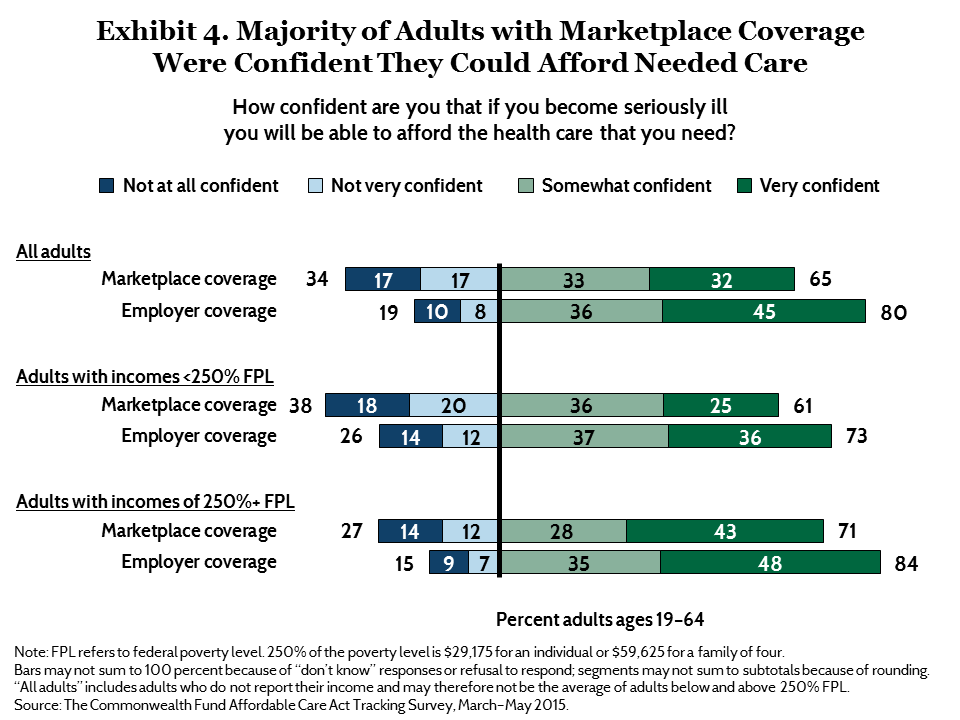 Confidence varied by the health status of respondents and the design of their health plans. Adults with health problems in marketplace plans were less confident than those with health problems in employer plans that they could afford care in the future (Exhibit 5).14 People with higher deductibles in both employer and marketplace plans were less confident they could afford needed care in the future than were those with lower deductibles.15 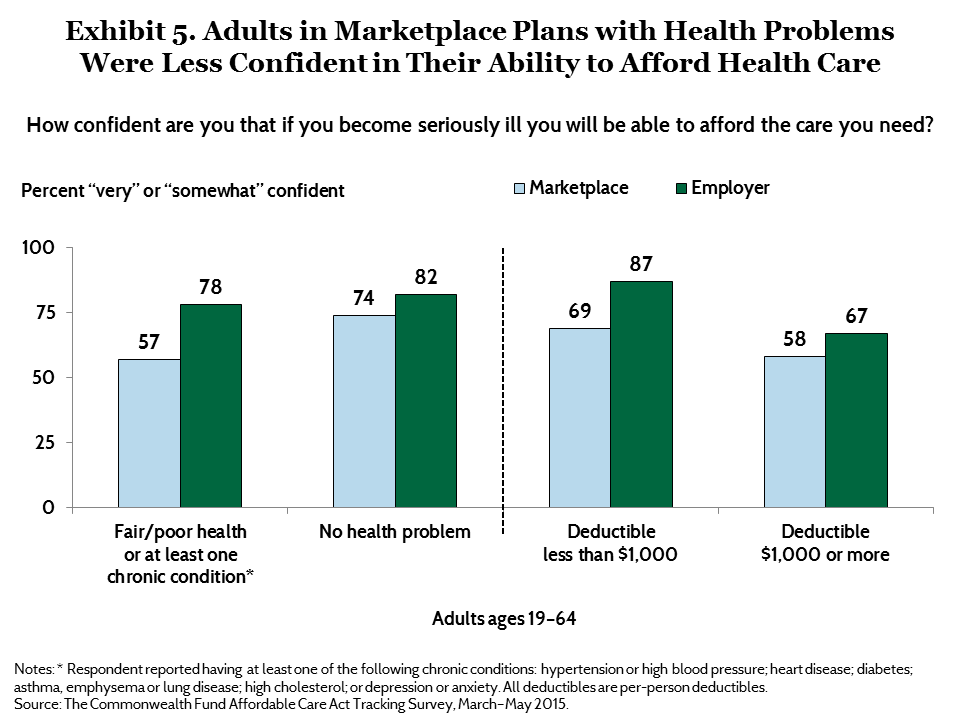 Adults with low and moderate incomes with high deductibles were the least confident. Among people enrolled in high-deductible plans ($1,000 or more) either through an employer or the marketplace, only half (54%) of those with incomes under 250 percent of poverty were confident they could afford care if they became ill compared with 78 percent of those in that income range with a deductible of less than $1,000 (Exhibit 6).16 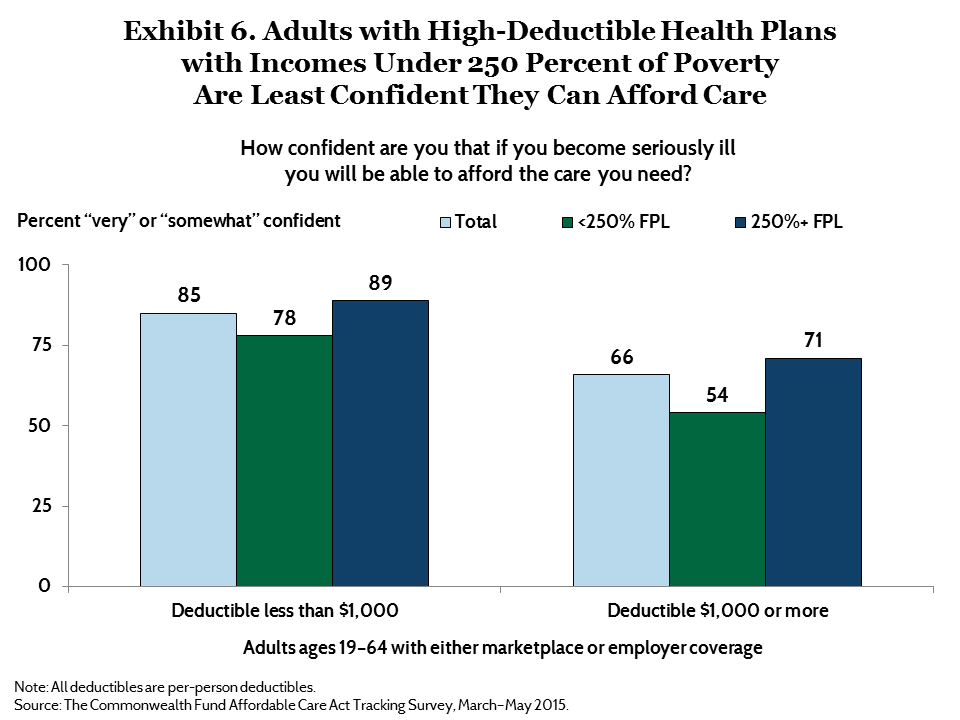 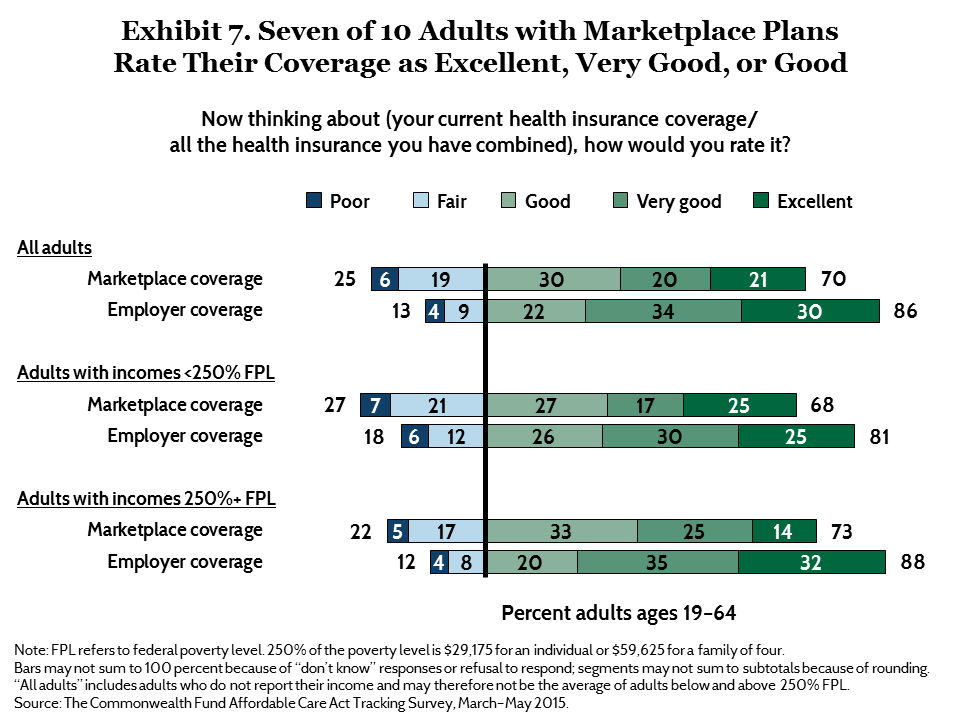 The survey findings indicate that the Affordable Care Act’s subsidized coverage options have been effective in making individual market coverage comparable to employer-based health benefits in terms of affordability for people with low or moderate incomes. But at higher incomes, given the phase-out of the premium tax credits, people with marketplace coverage spend more on premiums compared to those with employer health benefits.

On average, larger shares of people with marketplace plans have high deductibles than those in employer plans, with the differences widest among enrollees with higher incomes. Among those with lower incomes, the cost-sharing reduction subsidies appear to have had the effect of narrowing the difference in deductibles between those in marketplace plans and employer plans. Still, a large share of people with low and moderate incomes in marketplace plans have deductibles of more than $1,000. This is the result in part of the phase-out of subsidies at relatively low incomes, because many people in this income range selected lower-premium bronze-level plans and thus did not receive the subsidies, and because insurers also increase cost protection by lowering copayments, coinsurance, and out-of-pocket limits which are not explored in the survey. We know from the results reported in our companion issue brief that premium cost factors more heavily than do deductible size and copayments when people are choosing health plans.

Consistent with recent research by The Commonwealth Fund, the growing use and size of deductibles in both employer and marketplace plans as a means to lower premiums threatens to undermine the gains Americans have made in coverage since 2014.17 The House of Representatives has sued the Obama Administration over its funding of the cost-sharing subsidies, which, if the plaintiffs were to prevail, could lead to even higher deductibles and greater out-of-pocket cost exposure for people with low and moderate incomes enrolled in marketplace plans.18 Adults in high-deductible health plans are less confident in their ability to pay for their care if they were to become seriously ill compared to those with lower deductibles. People with the lowest incomes in these plans are the most at risk of spending large amounts of their income on medical care. Their lack of confidence about the future suggests they are aware of their financial vulnerabilities. In an economy that is still struggling to deliver significant wage gains to working families, ever higher cost-sharing in health plans will further degrade their financial security.

Appendix Table 1. Demographics of Adults Enrolled in Employer-Sponsored Insurance,
the Marketplace, or Medicaid, and Uninsured Adults

1 Analysis of 2014 Current Population Survey by Sherry Glied and Claudia Solis-Roman of New York University for The Commonwealth Fund.

2 J. R. Gabel, R. Lore, R. D. McDevitt et al., “More Than Half of Individual Health Plans Offer Coverage That Falls Short of What Can Be Sold Through Exchanges as of 2014,” Health Affairs Web First, published online May 23, 2012; and Kaiser/HRET Survey of Employer-Sponsored Health Benefits, 1999–2015.

6 As of June 30, 2015, about 9.9 million Americans had paid for health insurance coverage purchased through the marketplaces. As of June 2015, nearly 13.1 million additional individuals had enrolled in Medicaid and CHIP since October 2013, the start of the first marketplace open enrollment period (https://www.medicaid.gov/medicaid/program-information/downloads/june-2015-enrollment-report.pdf).

8 Included in this response are some people who refused to answer the question.

10 A small number of adults in marketplace plans had incomes under 100 percent of poverty. People in this income range might plausibly be enrolled in marketplace plans if they were legal residents in the five-year waiting period for Medicaid, in which case they would be eligible for subsidies under the ACA, or if they were living in a state that had not expanded eligibility for Medicaid and were able to buy a private plan. It is also possible that some people’s income estimates in the survey were inconsistent with the income on which their eligibility was based, or had changed since they enrolled. Results were not sensitive to removal of this group from the sample.

15 Among adults enrolled in marketplace plans, the difference in confidence in ability to afford health care between those with high and low deductibles was not statistically significant.

16 Because of sample size limitations, we grouped adults in employer and marketplace plans for this analysis.