U.S. health care costs are disproportionately concentrated among older adults with multiple chronic conditions or functional limitations—a population often referred to as “high-need” patients. This analysis uses data from the Commonwealth Fund 2014 International Health Policy Survey of Older Adults to investigate health care use, quality, and experiences among high-need patients in nine countries compared with other older adults. High-need patients use a greater amount of health care services and also experience more coordination problems and financial barriers to care compared with other older adults. Disparities are particularly pronounced in the United States. The comparative success of other countries, particularly in reducing financial barriers to care, may be a product of policies that specifically target high-need patients. Similarly focusing on these populations in the U.S. and effectively managing their care may improve their health status while reducing overall costs.

A large portion of U.S. health care spending goes to the care of high-need patients. These individuals—people with clinically complex conditions, cognitive or physical limitations, or behavioral health problems—use a disproportionate amount of health care services and therefore represent an outsized percentage of costs. Five percent of the U.S. adult population accounts for 50 percent of the nation’s health care costs and 10 percent accounts for 65 percent of total costs.1 The top 10 percent of spenders age 18 and older accrue health care expenditures of at least $12,000 per person per year, compared with a nationwide median of $1,100.2 Focusing on these high-need patients can go a long way toward containing costs while helping people lead healthier lives.

This analysis builds on an earlier Commonwealth Fund survey that focused on adults age 55 and older and their health care experiences in 11 high-income countries.3 In this brief, we describe the subset of high-need adults ages 65 and older in nine of these countries (Australia, Canada, France, Germany, the Netherlands, Norway, Sweden, Switzerland, and the United States) and then compare their patterns of health care use, financial barriers to care, care coordination, and their doctor–patient relationships to those of other older adults. We highlight important aspects that may play a role in reducing costly utilization for this population, and which should factor into the development of any policy solutions. We also highlight policies in countries that have had success in providing care for this population, drawing insight for the U.S. and other countries.

Who Are High-Need Patients?

In this brief, “high-need” patients are defined as those age 65 and older with at least three chronic conditions or a functional limitation in activities of daily living, like dressing or bathing. (See Methods.) Among the countries surveyed, the U.S. had the highest percentage of older adults with three or more chronic conditions (42%) (Exhibit 1). Prior studies have shown that having difficulty with activities of daily living—even when people do not have accompanying chronic conditions—can hinder people from getting needed, appropriate care.4 Older adults in Australia and the U.S. reported functional limitations at lower rates (14%) than their counterparts did in the other countries surveyed (Exhibit 2). 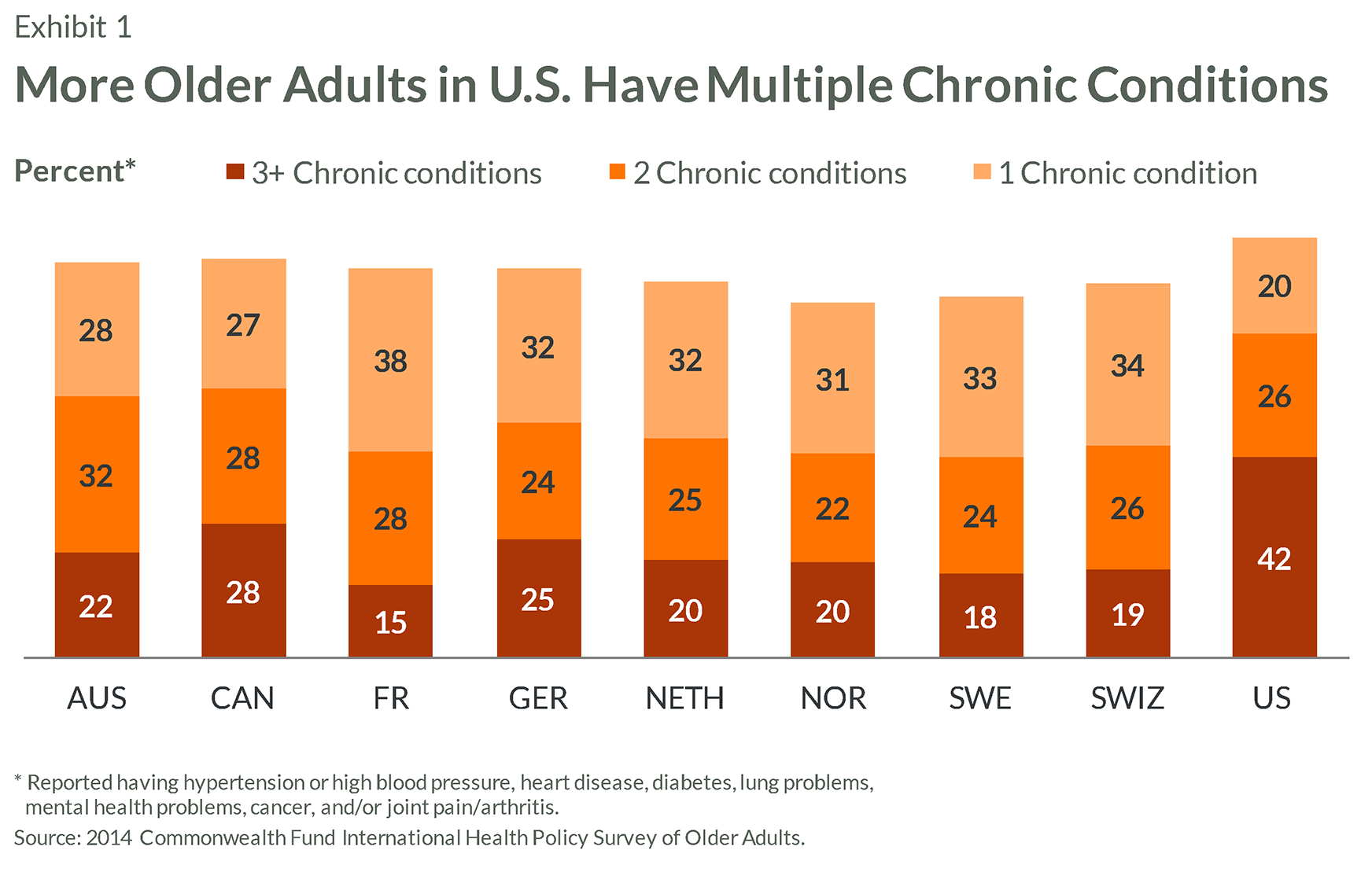 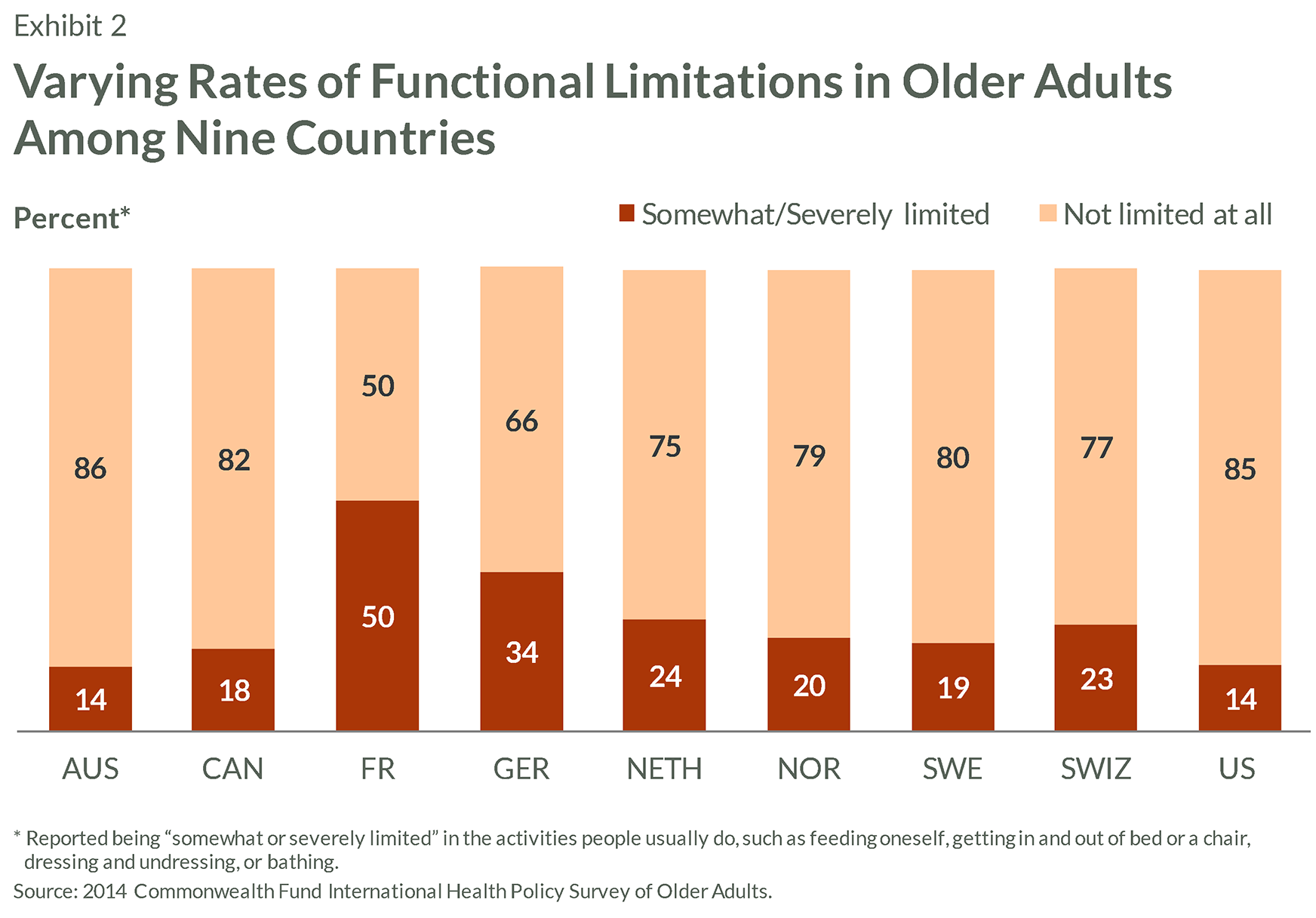 In most countries, including the U.S., high-need older people tend to have low incomes, adding to their vulnerability and the need for protective policies (Appendix Table 1).

In the U.S. and four other countries (Canada, France, Sweden, and Switzerland), high-need patients' use of the ED in the past two years for a condition that could have been treated by their regular doctor was significantly greater compared with other older adults. In the U.S. and Canada, about one of five (19%) high-need patients reported an avoidable ED visit. The disparity between high-need and other adults was the greatest in the U.S. (Exhibit 3). 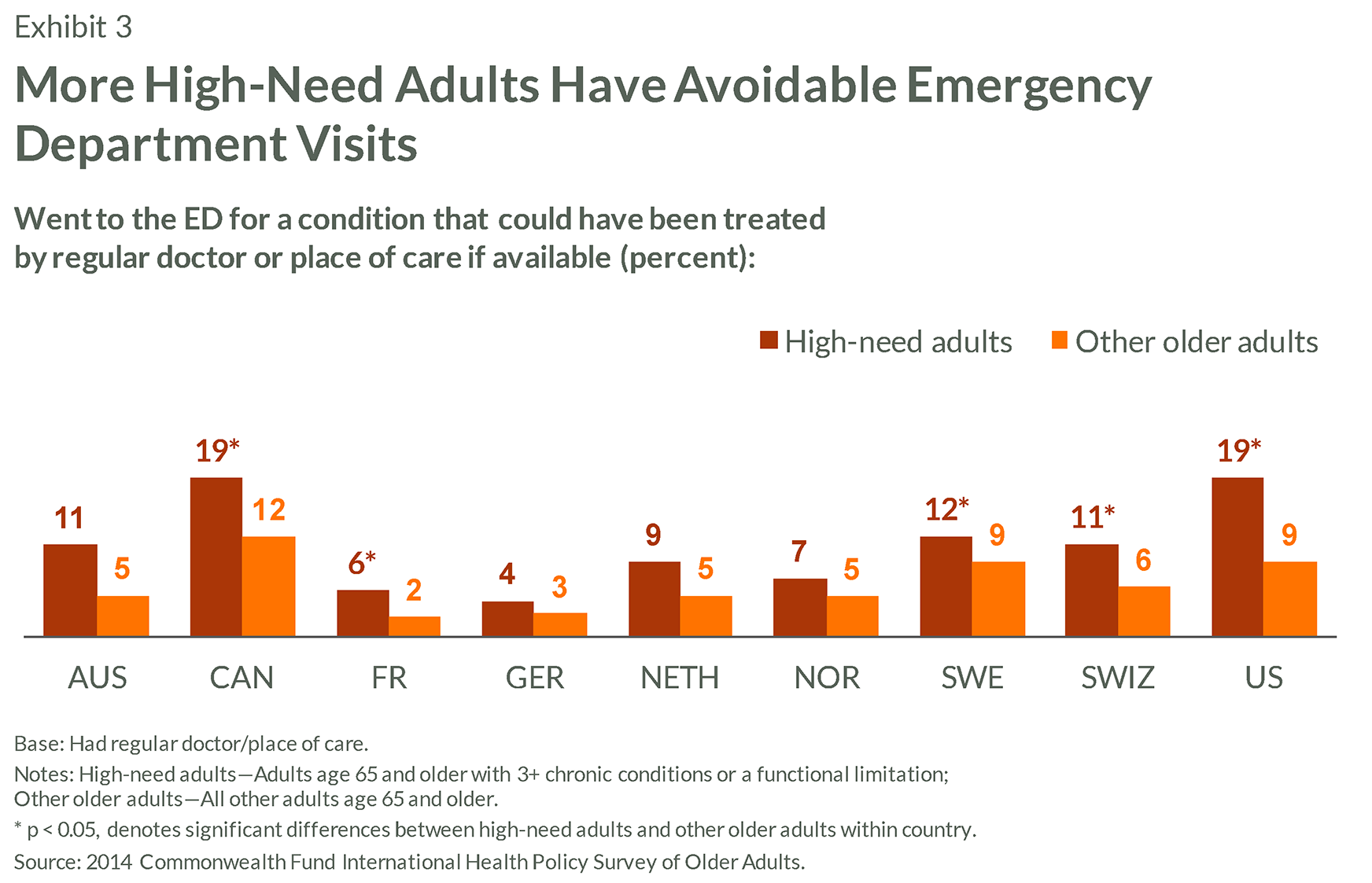 More high-need adults faced cost-related problems accessing needed care as well (Exhibit 4). These problems included having a medical problem but not visiting the doctor; skipping recommended tests, treatment, or follow-up because of cost; or skipping or not filling prescriptions because of cost. More than one of five (22%) high-need adults in the U.S. reported such a problem—the highest rate of any of the countries studied. Even U.S. adults who were not considered high-need experienced cost-related access problems at a greater rate than high-need adults in seven of the eight other countries surveyed. 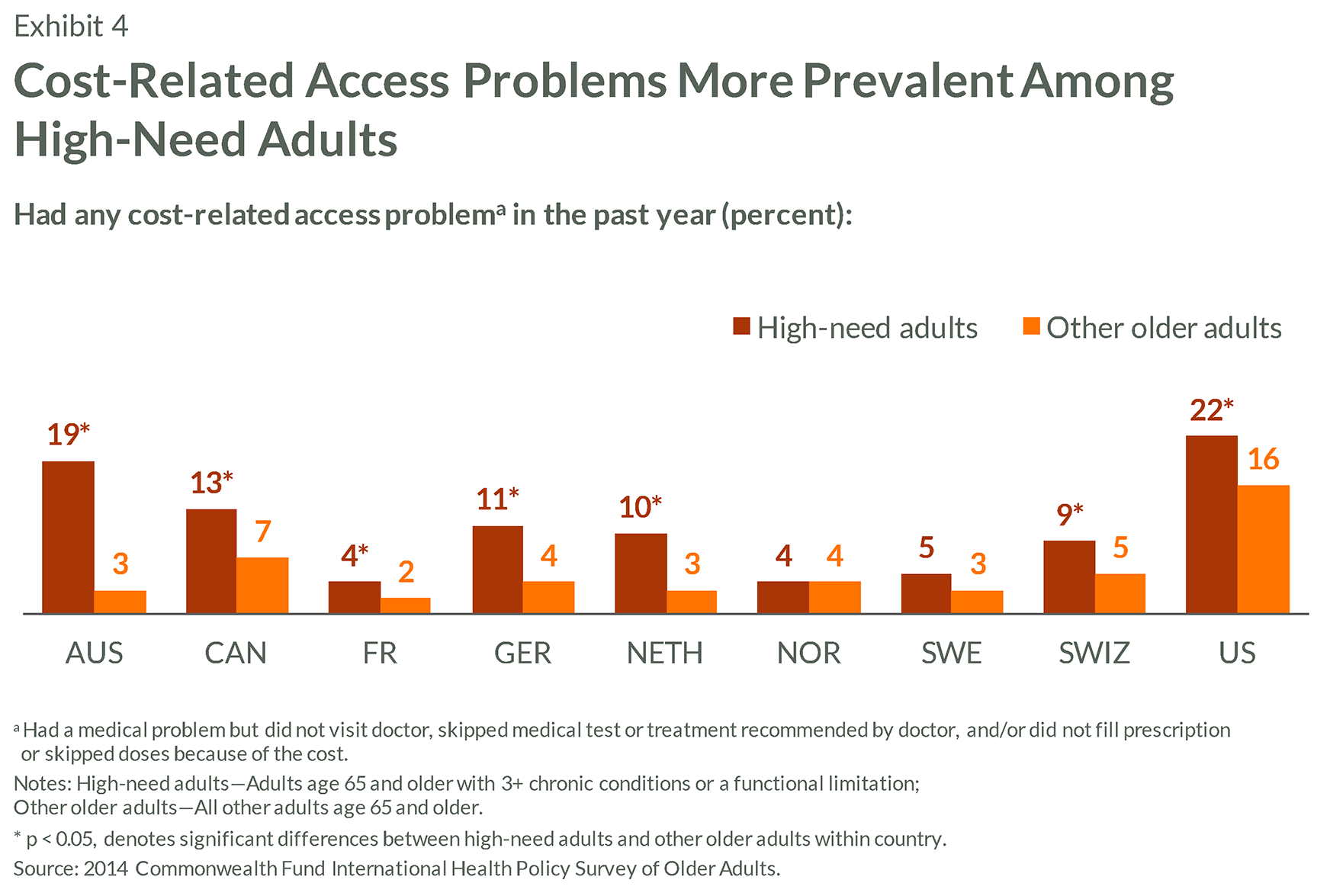 The high-need population is especially susceptible to problems of poor coordination within the health system. At least one of four high-need adults in nearly all the countries studied experienced a coordination problem (Exhibit 5). In Germany, Norway, and the U.S., nearly half of high-need adults had such a problem. High-need patients in the U.S. reported the following at much higher rates than did other older adults: test results were not ready at the time of appointment or duplicate tests were ordered (29% high-need vs. 17% others); patients received conflicting information from doctors (20% vs. 13%); and specialists lacked information or their regular doctor was not informed about the specialist care received (23% vs. 13%) (Appendix Table 3). 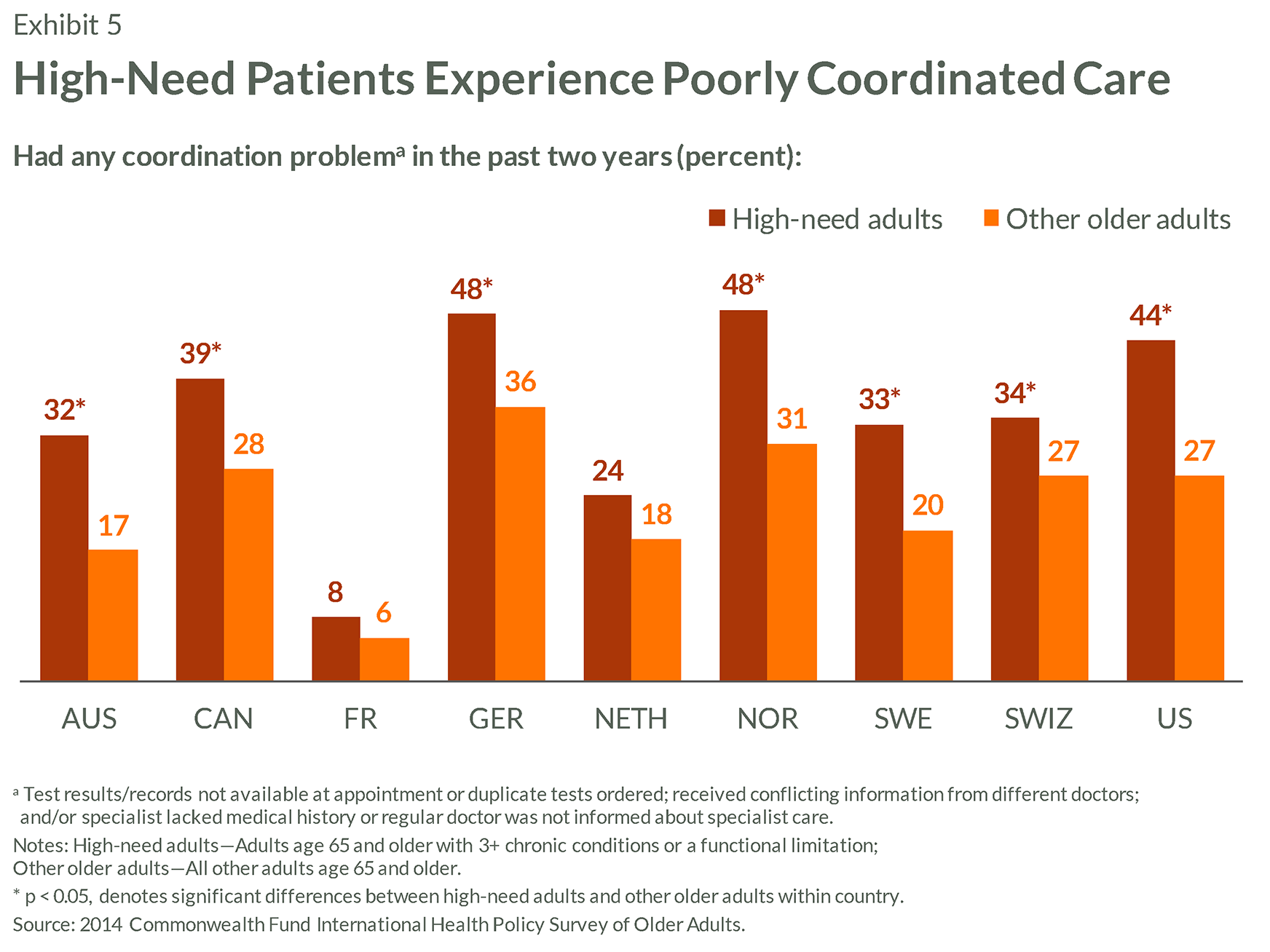 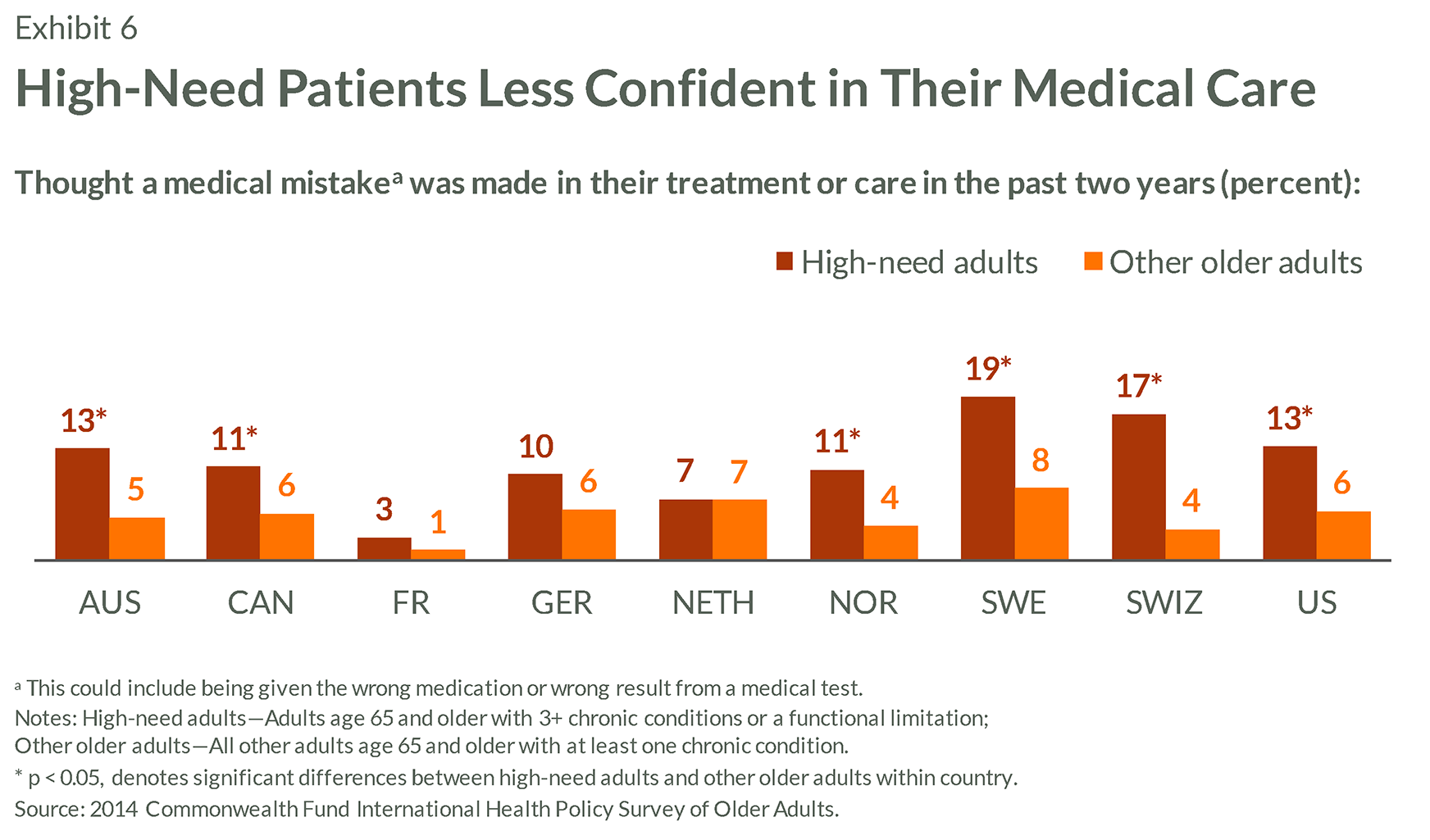 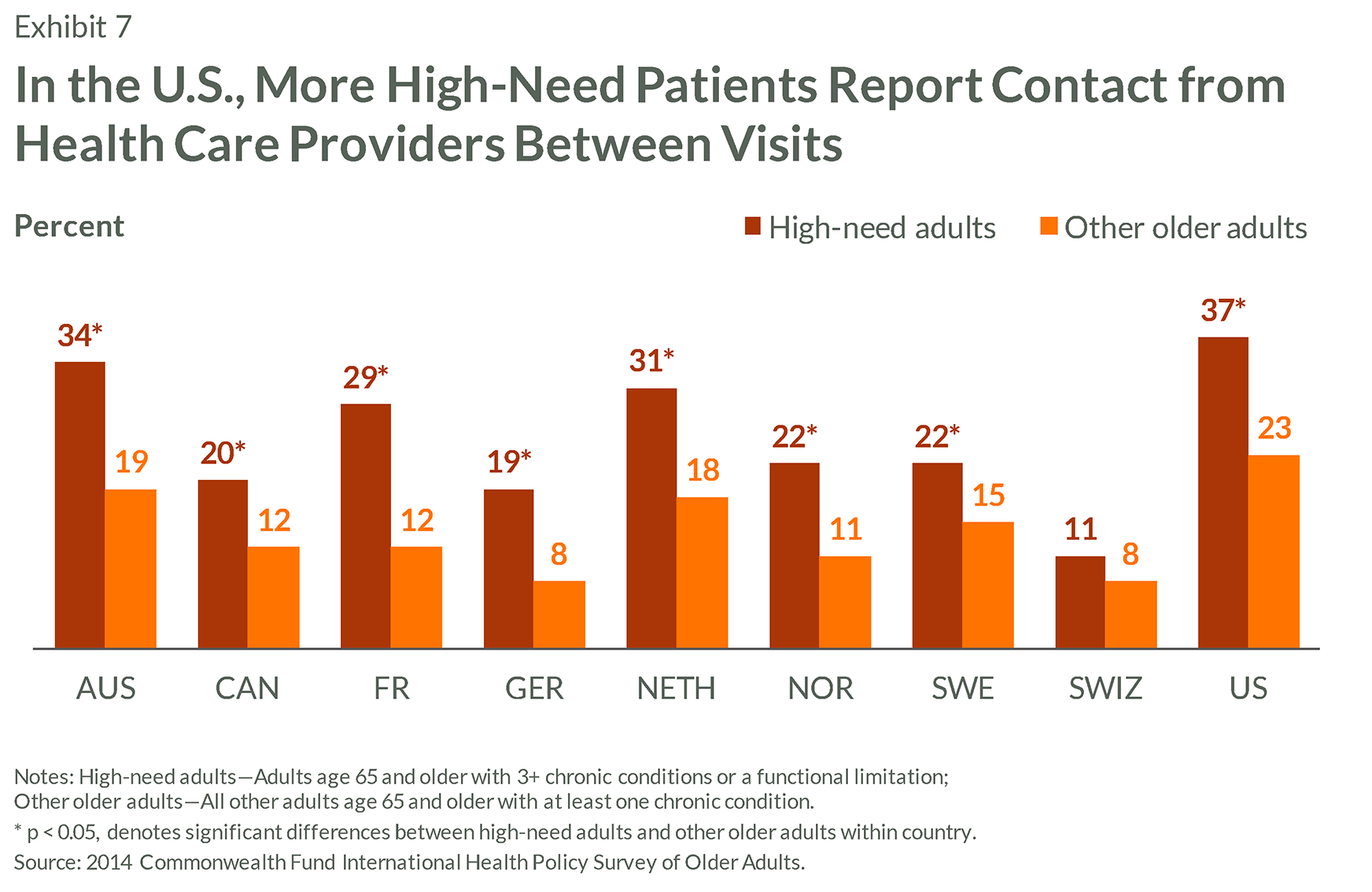 Though high-need patients experience many barriers to receiving high-quality care, they are very likely to have a treatment plan, especially in the U.S.7 Nearly nine of 10 (87%) high-need adults in the U.S. reported they had a daily treatment plan. The U.S. rates were highest among the countries surveyed (Exhibit 8). 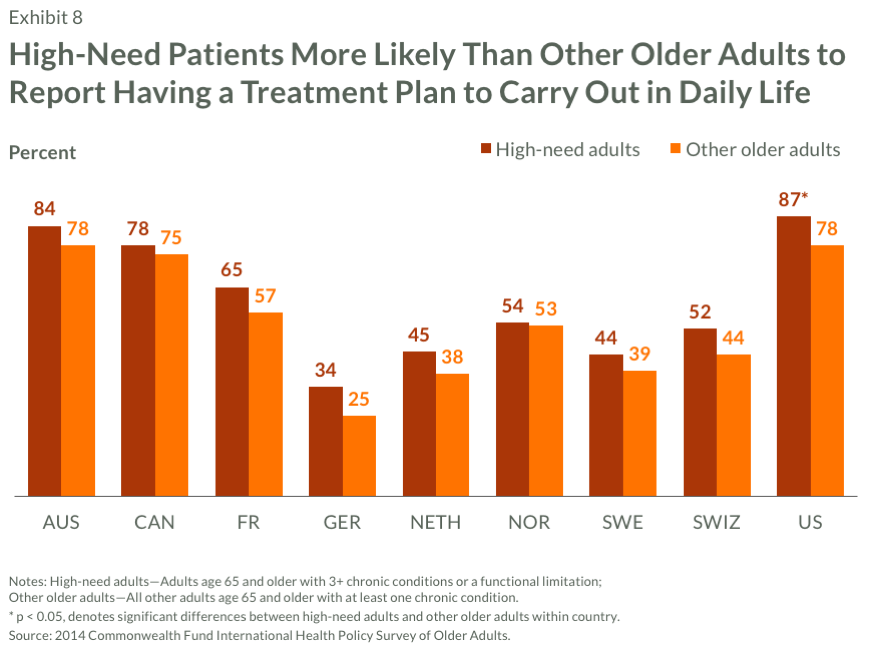 Poor performance for high-need patients may contribute to high costs. By using ED visits instead of primary care (when such care is inaccessible), these patients inadvertently increase health care spending and further fragment their own care. In addition, lack of care coordination may lead to overuse of care, particularly in lab tests and imaging.8 Research also has shown that less-engaged patients cost more than highly engaged patients. Encouraging physicians to get patients involved in their care may further help reduce cost growth.9

Health systems that tend to perform well specifically with regard to high-need patients share common markers of high performance in other areas as well. Data from the Commonwealth Fund 2015 International Health Policy Survey of Primary Care Physicians in 10 Countries indicate that these countries tended to have a higher percentage of physician practices that have after-hours arrangements for patients (Germany, the Netherlands, Norway), frequently make home visits (the Netherlands, France, Germany), and use nurse case managers for people with serious chronic conditions (France, the Netherlands, Sweden).10

Success in other countries, particularly in reducing financial barriers to care, may be the result of policies that target high-need patients. France, for instance, has eliminated copayments for individuals with any of 32 chronic illnesses—essentially eliminating any cost-related barriers to care for this population.11 Germany’s disease management programs for chronically ill patients combine technology, quality assurance (e.g., reminders and benchmarking), and financial incentives for physicians, patients, and payers. Since the implementation of these programs, hospitalization rates, duration of hospital stay, mortality, and drug costs have decreased while quality of care and patient satisfaction have improved.12 Further analysis of these policies and their key features can help U.S. policymakers provide better care to high-need patients.

1 S. B. Cohen and W. Yu, The Concentration and Persistence in the Level of Health Expenditures over Time: Estimates for the U.S. Population, 2008–2009, Statistical Brief #354 (Rockville, Md.: Agency for Healthcare Research and Quality, Jan. 2012).

7 The term "treatment plan" should be interpreted with caution; respondents were asked "Do you have a treatment plan for your __________ [chronic disease] that you can carry out in your daily life?” Without providing a technical definition for "treatment plan" in the survey, this term was open to interpretation by the respondents, and could have different meanings across countries.