How Will the Affordable Care Act's Cost-Sharing Reductions Affect Consumers' Out-of-Pocket Costs in 2016?

Health insurers selling plans in the Affordable Care Act’s marketplaces are required to reduce cost-sharing in silver plans for low- and moderate-income people earning between 100 percent and 250 percent of the federal poverty level. In 2016, as many as 7 million Americans may have plans with these cost-sharing reductions. In the largest markets in the 38 states using the federal website for marketplace enrollment, the cost-sharing reductions substantially lower projected out-of-pocket costs for people who qualify for them. However, the degree to which consumers’ out-of-pocket spending will fall varies by plan and how much health care they use. This is because insurers use deductibles, out-of-pocket limits, and copayments in different combinations to lower cost-sharing for eligible enrollees. In 2017, marketplace insurers will have the option of offering standard plans, which may help simplify consumers’ choices and lead to more equal cost-sharing.

Since the Affordable Care Act (ACA) was passed in 2010, the number of uninsured people in the United States has fallen by about 20 million.1 As a result, the amount Americans collectively spend out-of-pocket for health care has declined.

According to the Centers for Medicare and Medicaid Services, growth in household out-of-pocket health care spending slowed from 2.1 percent in 2013 to 1.3 percent in 2014.2 Out-of-pocket spending on hospital services, a big-ticket item for the uninsured prior to the ACA, actually fell by more than 4 percent. Moreover, federal and private consumer surveys show nationwide declines in reports of medical bill problems and cost-related delays in getting health care.3

Out-of-pocket spending growth has moderated not only because millions more people have full protection against catastrophic health care costs, but also because the ACA both requires private health insurance plans (and Medicaid plans) to cover a comprehensive set of services and places limits on annual out-of-pocket costs. Whether consumers purchase insurance inside or outside the marketplaces, they can choose among plans offering varying levels of cost protection, ranging from bronze to platinum (see box). Those who have gained coverage through the Medicaid expansion face little cost-sharing.

For people with low or moderate incomes who are purchasing marketplace plans, the law expands financial protection in two ways: by lowering out-of-pocket limits and by reducing the amount of cost-sharing required. Cost-sharing reductions, which are available to people enrolled in silver plans who earn between 100 percent and 250 percent of the federal poverty level ($11,770 to $29,425 for an individual; $24,250 to $60,625 for a family of four), effectively increase the actuarial value of the coverage—the average percentage of costs covered—to that of a gold or platinum plan. Insurers provide these silver plan variants through a combination of lower deductibles, out-of-pocket limits, copayments, and coinsurance. The federal government reimburses insurance companies directly for these cost-sharing reductions, though Congress is currently disputing how the Obama administration is carrying this out.

In this brief, we look at the effects of cost-sharing reductions on projected 2016 out-of-pocket costs for the people who qualify for them. To do this, we compare hypothetical 40-year-old, nonsmoking males with annual income of $17,000, $20,000, and $25,000, making them eligible for the reductions, with a similar adult earning $35,000, which is above the qualifying threshold. In our study, each person purchases the second-lowest-cost silver plan available in the largest city in each of the 38 states that use the federal website HealthCare.gov to enroll residents in marketplace plans. We use the website’s consumer cost comparison tool to provide a rough estimate of out-of-pocket costs for people at these different income levels and for low, medium, and high users of care, as defined by HealthCare.gov. (For further detail, see How We Conducted This Study.) 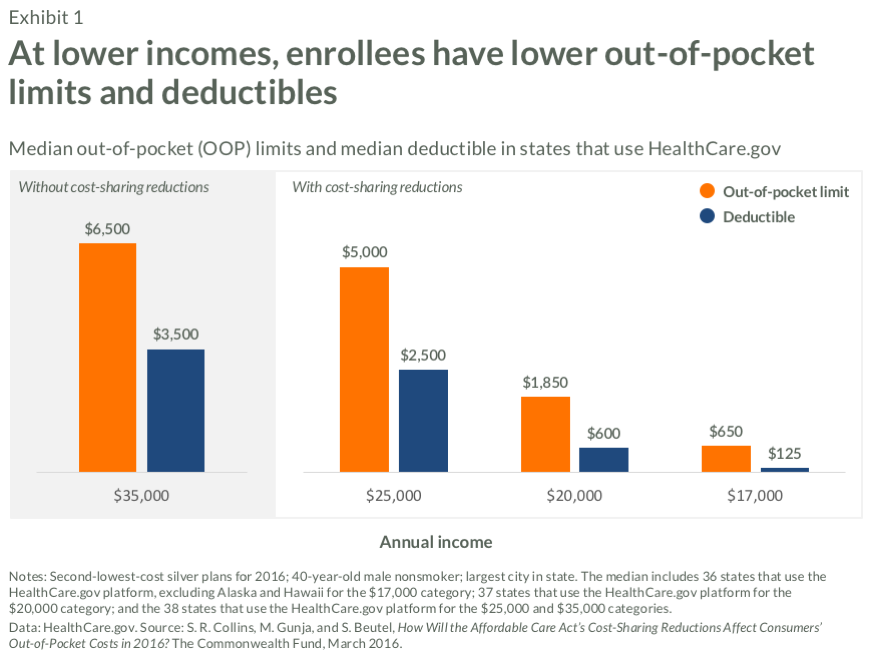 The effects of the cost-sharing reductions on deductibles vary widely across the plans we analyzed (Exhibit 2). For example, for people with a $17,000 annual income, deductibles range from zero in 12 plans to a high of $700 in Newark, New Jersey. For someone with $20,000 in income, deductibles range from zero in the largest cities in Hawaii, Nevada, Oregon, Tennessee, and Texas to $1,750 in the Indiana and Wisconsin plans (Table 1). 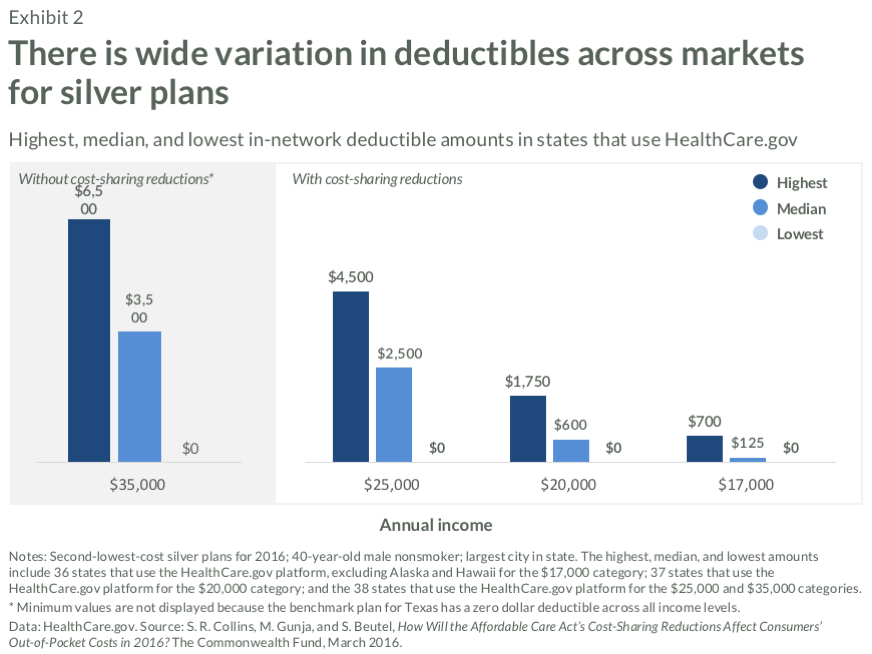 A health plan’s deductible is only one of many factors that determine enrollee costs over the year. Another is the plan’s out-of-pocket spending limit: the maximum amount someone would have to pay for their care in a given year. These limits are particularly important for people who need a lot of health care. 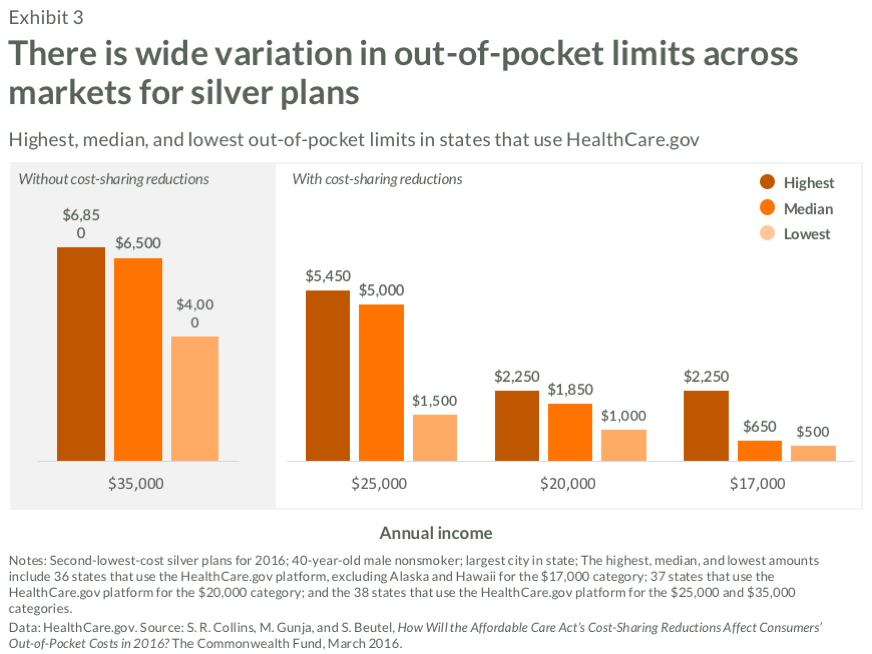 Under most health insurance, people must make a copayment or pay coinsurance whenever they use their plan to get health care. We find that the cost-sharing reductions in many health plans lower these costs for many services. For example, in about three-quarters of plans, copayments for primary care visits are lower for adults earning $17,000 or $20,000 compared to adults earning $35,000 (Appendix Tables 3–7). In 18 plans, people with income of $25,000 had copayments for primary care visits that were lower than those who earned $35,000.

In addition, most plans offered in the 38 marketplaces provide full coverage for many key services. This means that even if they have not yet met their deductible, enrollees can go to the doctor or fill a prescription while making only the required copayment. (See our companion brief, How Deductible Exclusions in Marketplace Plans Improve Access to Many Health Care Services.)

What do these reductions in deductibles, out-of-pocket limits, and copayments mean for someone’s out-of-pocket costs? To get a rough estimate, we used the HealthCare.gov out-of-pocket cost comparison tool, designed to help consumers shop for a marketplace plan. We determined costs for low, medium, and high users of care, as defined by the government for a 40-year-old nonsmoking male. Men use somewhat fewer services than women in this age group, so women’s costs will be higher than those presented here. (For further detail, see How We Conducted This Study.) 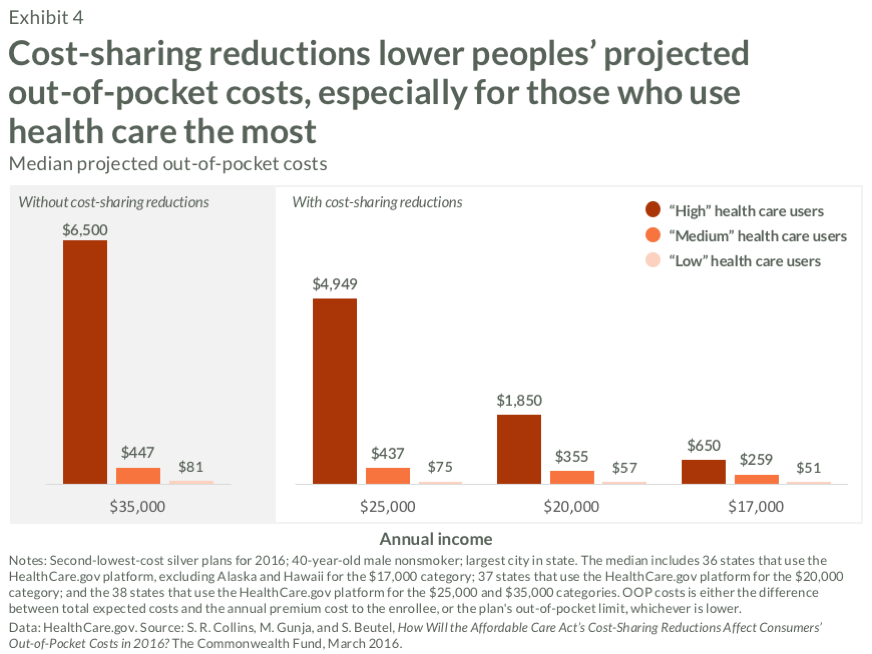 How Much Consumers Pay Depends on Their Health Plan

While the cost-sharing reductions lower people’s out-of-pocket costs, the degree to which they fall depends on their health and their health plan. This is because insurance companies use different combinations of deductibles, out-of-pocket limits, copayments, and coinsurance to arrive at the same average actuarial value for enrollees in a plan. And these different combinations mean very different costs for people, depending on how much health care they use in a given year.

To understand what’s behind the wide variation in potential out-of-pocket costs in the 38 state markets, we compare the experiences of a 40-year-old man earning $17,000, and thus eligible for the greatest cost-sharing reduction, in the second-lowest-cost silver plan in four markets: Houston, Texas; Virginia Beach, Virginia; Newark, New Jersey; and Columbus, Ohio.

Differences between the silver plans in Houston and Virginia Beach demonstrate why it is important to look beyond the deductible when projecting enrollees’ potential cost exposure (Exhibit 6). Virginia’s second-lowest-cost silver plan for someone earning $17,000 has a $150 medical deductible but also a $250 prescription drug deductible. The plan also comes with a low $600 out-of-pocket limit. It provides coverage for primary care visits and specialist visits before the medical deductible and charges $15 and $30 copayments, respectively. But for both generic and preferred prescription medications, the enrollee must first meet the drug deductible, after which a $15 copayment is charged for generic drugs and 50 percent coinsurance is charged for preferred drugs. Low users of care are projected to spend $72 for the year, medium users, $403, and high users, $600. 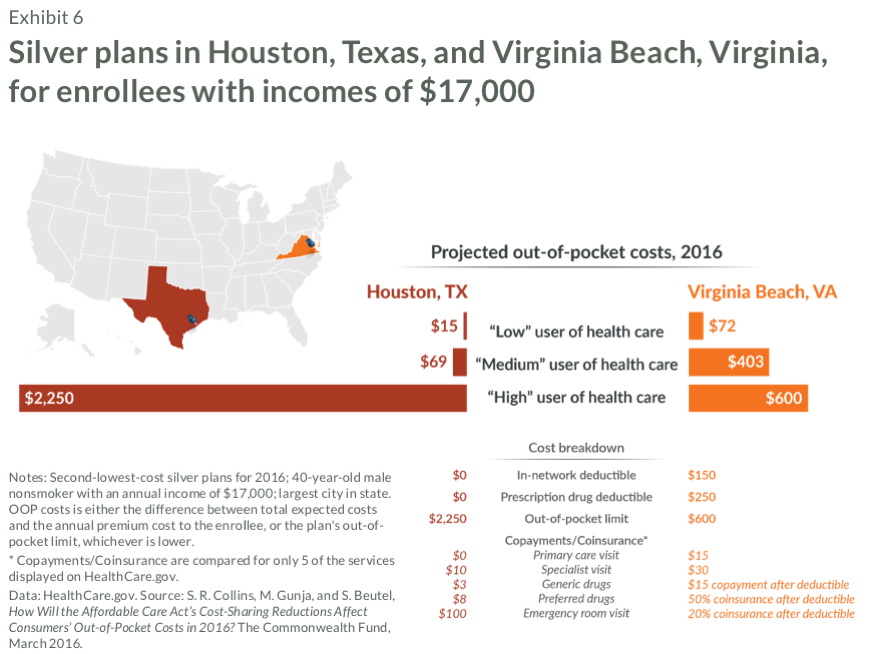 The Texas plan is quite different. It has no deductible for either medical or prescription drugs but a high $2,250 out-of-pocket limit. People have free primary care visits and pay $10 for specialist visits. Prescription drug costs are substantially lower compared to those in the Virginia plan: $3 copayments for generic drugs and $8 for preferred drugs. These low copayments mean that low and medium users of care spend significantly less in the Texas plan ($15 and $69 vs. $72 and $403). But because out-of-pocket limits are so much higher, someone enrolled in the second-lowest-cost silver plan in Texas who uses a lot of health care will have out-of-pocket costs more than three-and-a-half times those incurred by a high user in Virginia ($2,250 vs. $600).

There are similar differences in estimated out-of-pocket costs in the silver plans in Columbus, Ohio and Newark, New Jersey (Exhibit 7). Low and medium users of care are projected to spend significantly less in Ohio than in New Jersey ($9 and $59 vs. $51 and $428), but high users in Ohio are projected to spend more than twice what they would spend in New Jersey ($1,500 vs. $700). In this case, the higher out-of pocket-costs for low and medium users in New Jersey are driven in part by what’s included in the plan deductible. While the New Jersey plan excludes primary care visits and generic drugs from the deductible, plan enrollees have to pay the full price of specialist visits and preferred drugs until they have met their deductible. By contrast, there is no deductible in Ohio; people just pay $10 for specialist visits and $15 for preferred drugs. 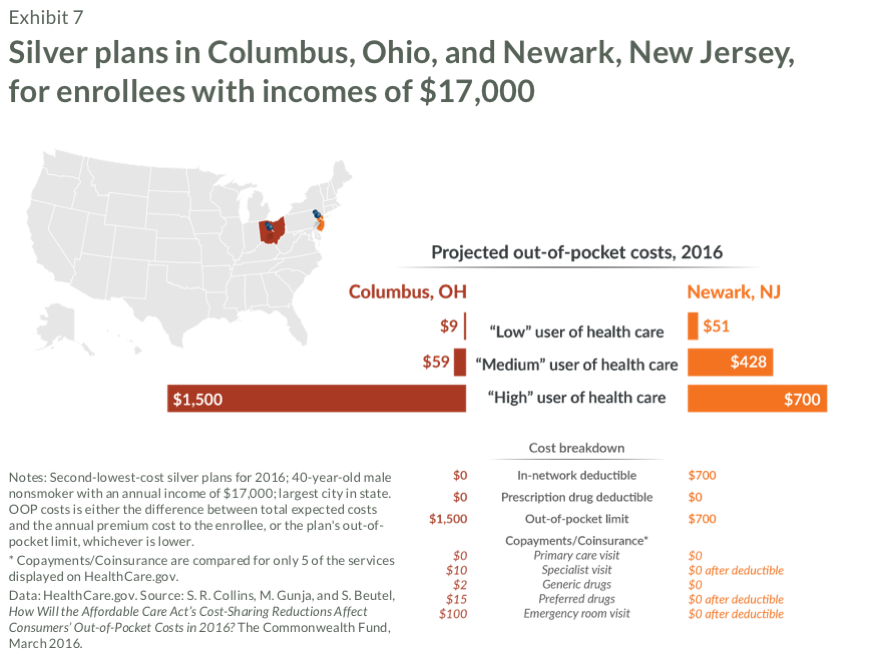 The Affordable Care Act’s cost-sharing reductions are playing a critical role in limiting out-of-pocket cost exposure for low- and moderate-income people enrolled in marketplace plans. If the House of Representatives prevails in its suit against the Obama administration challenging the financing of these reductions, up to 7 million people will have higher out-of-pocket costs than before (see box). This may lead many people, especially those in good health, to disenroll from their plans, an event that could destabilize the marketplaces.

We also found that the considerable variation in the design of the second-lowest-cost silver plans creates variation in estimated out-of-pocket costs in the 38 markets. In its final rule for 2017, the federal government will give insurers the option of offering a set of standard plans in the federal marketplaces.13 These plans would have fixed deductibles, out-of-pocket limits, and copayments or coinsurance for health care services. In addition, they would provide pre-deductible coverage for eight services and prescription drugs. If insurers offer the plans, it will be easier for consumers to compare their potential out-of-pocket costs under different health plans. The standard options also could lead to more equal consumer cost-sharing across across the country, at least for some plans.

For this analysis, we looked at the second-lowest-cost silver plan in the largest city in the 38 states that used the federal website HealthCare.gov to enroll consumers in marketplace plans for 2016. We pulled information for a 40-year-old, nonsmoking male.

For our analyses of deductible exclusions, we included only the second-lowest-cost silver plans that have deductibles. At the $35,000 annual income level, Texas is the only state that has no deductible and is therefore not included in the analysis.

5 The cost-sharing medians are for the largest city in the state and may not apply for every 40-year-old male nonsmoker in the market.

8 The out-of-pocket cost comparison tool at HealthCare.gov estimates high users of health care with annual incomes of $17,000 to spend $2,250 on out-of-pocket costs in the Texas and Oregon plans. We also include the Louisiana plan in this definition since the second-lowest-cost silver plan’s out-of-pocket limit is $2,250.