U.S. workers and their families, especially those living in the South, are spending a bigger share of their income on health care, a new study finds

Average employee premium contributions for single and family health plans consumed nearly 7 percent of U.S. median income in 2017, up from 5 percent in 2008

Recent national surveys show health care costs are a top concern in U.S. households.1 While the Affordable Care Act’s marketplaces receive a lot of media and political attention, the truth is that far more Americans get their coverage through employers. In 2017, more than half (56%) of people under age 65 — about 152 million people — had insurance through an employer, either their own or a family member’s.2 In contrast, only 9 percent had a plan purchased on the individual market, including the marketplaces.

In this brief, we use the latest data from the federal Medical Expenditure Panel Survey–Insurance Component (MEPS–IC) to examine trends in employer premiums at the state level to see how much workers and their families are paying for their employer coverage in terms of premium contributions and deductibles. We examine the size of these costs relative to income for those at the midrange of income distribution. The MEPS–IC is the most comprehensive national survey of U.S. employer health plans. It surveyed more than 40,000 business establishments in 2017, with an overall response rate of 65.8 percent. 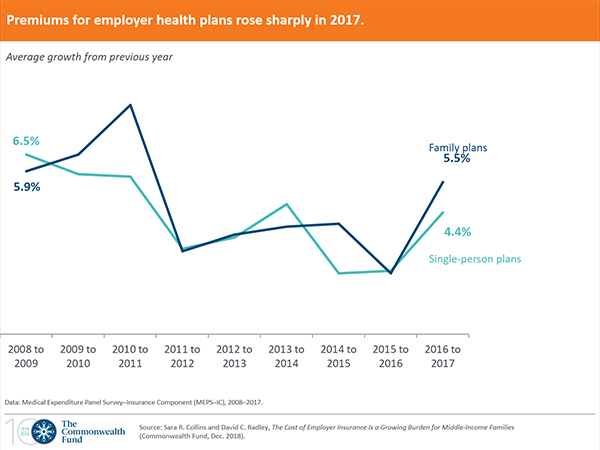 After modest annual growth for the five years between 2011 and 2016, premiums for employer health plans ticked up sharply in 2017, by 4.4 percent for single plans and 5.5 percent for family plans. Average single-person premiums increased in 45 states and D.C. and climbed above $7,000 in eight states (Alaska, Connecticut, Delaware, Massachusetts, New Jersey, New York, Rhode Island, Wyoming) (Table 1a). Family premiums increased in 44 states and D.C. and were $20,000 or higher in seven states (Alaska, Connecticut, Massachusetts, New Jersey, New York, West Virginia, Wyoming) and D.C. (Table 1b). 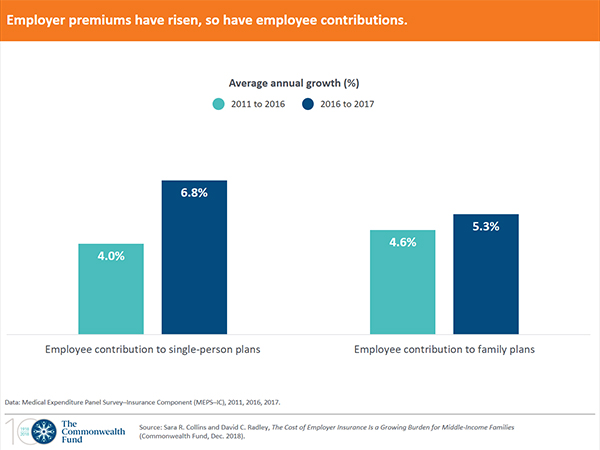 People with job-based insurance pay about one-quarter of their overall premium cost, on average. This has changed little in recent years (Table 2). But in some states employees and their families pay a larger share. In 14 states, people with family plans paid for 30 percent or more of the cost of their insurance; in Delaware, Louisiana and Virginia, they paid 34 percent.

Even though the share of premiums paid by employees has remained stable, their payments are increasing. In 2017, because the rate of growth in employer premiums jumped overall, the amount employees paid climbed too. Between 2016 and 2017, average employee premium contributions nationally rose by 6.8 percent to $1,415 for single-person plans and by 5.3 percent to $5,218 for family plans (Tables 3a and 3b). 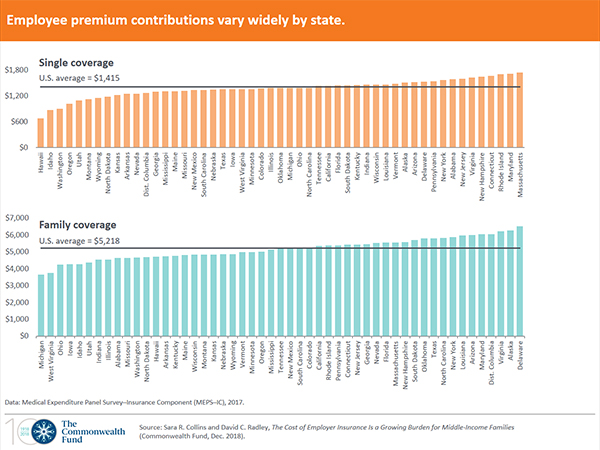 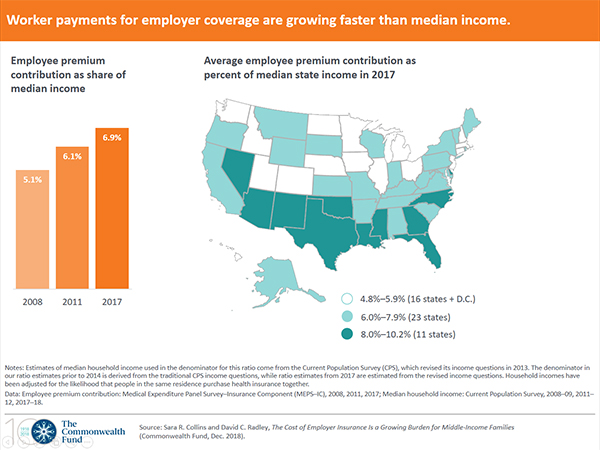 To see what these costs mean for people with incomes in the middle range of the U.S. income distribution (about $62,000 a year), we looked at the ratio of employee premium contributions to median income in the 50 states and D.C. The average employee premium cost across single and family plans amounted to 6.9 percent of median income in 2017, up from 5.1 percent in 2008 (Table 6). In 11 states (Arizona, Delaware, Florida, Georgia, Louisiana, Mississippi, Nevada, New Mexico, North Carolina, Oklahoma, Texas), premium contributions were 8 percent of median income or more, with a high of 10.2 percent in Louisiana. 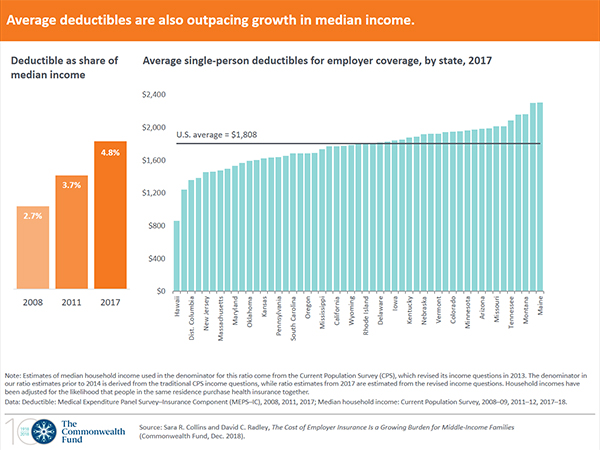 In many states, even though costs are rising, people are not getting insurance that protects them more because deductibles are also increasing. Deductibles are the amount of health care services people must pay for out-of-pocket before their insurance coverage kicks in. In 2017, the average deductible for single-person policies rose by 6.6 percent to $1,808 (Table 4). Average deductibles increased in 35 states and the District of Columbia, ranging from a low of $863 in Hawaii to a high of about $2,300 in Maine and New Hampshire.

Not everyone has enough medical expenses in a given year to meet deductibles. In fact, some services, like flu shots and other preventive care, are covered by plans before members meet their deductible. These are known as deductible exclusions. Among families that do spend enough to meet their deductibles, those at the midrange of the income distribution would spend 4.8 percent of their income on average before their coverage kicked in. In 2008, families at this income range spent 2.7 percent of income (Table 6). 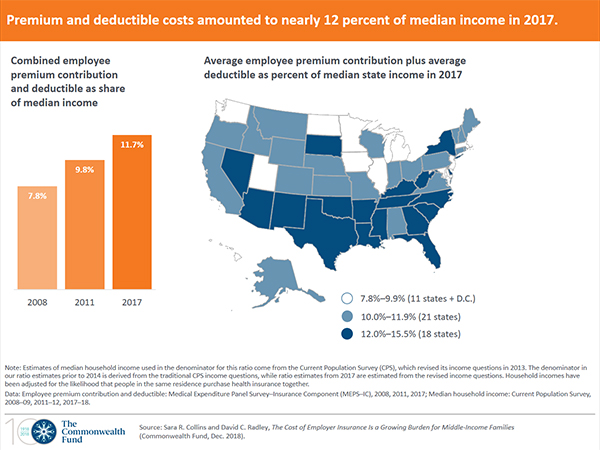 Added together, the total cost of premiums and potential spending on deductibles averaged across single and family policies climbed to $7,240 in 2017 (Table 5). This combined cost ranged from a low of $4,664 in Hawaii to a high of more than $8,000 in eight states (Alaska, Arizona, Delaware, New Hampshire, North Carolina, South Dakota, Texas, Virginia).

For people with midrange incomes, total spending on premiums and potential out-of-pocket costs amounted to 11.7 percent of their income in 2017 (Table 6). This is up from 7.8 percent a decade earlier. In Louisiana and Mississippi, these combined costs rose to 15 percent or more of median income.

Families’ costs for employer health insurance are rising faster than median income. Moreover, even as costs climb, many families aren’t receiving higher-quality insurance. The amount they have to spend out of pocket before their insurance coverage kicks in also continues to climb. While this study only considered families with middle incomes, lower-income families with employer coverage will use an even larger share of their income for health insurance costs.

People across the United States are not experiencing health care costs equally. There is variation across states in the size of employer premiums, the amount of employee contributions, deductibles, and median incomes.

In this study, families who could potentially spend the greatest amount of their incomes on insurance costs and deductibles are concentrated in the South. In Mississippi, for example, people on average spend 15 percent of their incomes on premiums and meeting deductibles. The overall premium for a family policy is below the national average, but families are asked to contribute 30 percent of the cost, which is higher than the national average. Further, Mississippi has one of the lowest median incomes in the country ($42,500) (Table 7). In contrast, people in New Hampshire pay more per year for their insurance and deductibles, but median income is among the highest in the country ($75,000).

Higher costs for insurance and health care have implications. People with low and moderate incomes may simply decide to go without insurance if it competes with other critical living expenses like housing, food, and education. In 2017, average per-person expenditures on food in the U.S. amounted to 13 percent of median income and housing costs were 32 percent.3 People with coverage but deductibles that are high relative to income are nearly as likely as those uninsured to skip needed health care, like filling prescriptions or going to the doctor when they are sick.4

The Affordable Care Act provides some protection to people with employer coverage. People with employer premium expenses that exceed 9.5 percent of their income are eligible for marketplace subsidies, which trigger a federal tax penalty for their employers. There’s a catch: this provision only applies to single-person policies, leaving many middle-income families caught in the so-called “family coverage glitch.” The data in this report show that the average employee contribution to a family plan exceeds 9.5 percent of state median income in 22 states and the District of Columbia (data not shown).

Policymakers have several options to reduce health insurance cost burdens for middle-income families and narrow the wide regional differences identified in this study. First, Congress could lower many families’ premiums by repairing the family coverage glitch by pegging unaffordable coverage in employer plans to family policies instead of single policies.5 Second, Congress could improve the cost protection of plans. Currently, under the ACA, people in employer plans may become eligible for marketplace tax credits if the actuarial value of their plan is less than 60 percent (i.e., covers less than 60 percent of their costs on average). Congress could increase this to 70 percent (the level of silver plans sold in the individual market) or higher. Third, Congress could require employers to increase the number of services that are covered before someone meets their deductible. Most employer plans currently exclude at least some services from their deductibles.6 Congress could set a minimum set of exclusions for employer plans that might resemble the simple choice options that the Obama administration created for ACA marketplace plans.7 Fourth, refundable tax credits could be made available to help insured Americans pay for qualifying out-of-pocket costs that exceed a certain percentage of their income.

Health care cost growth is the primary driver of premium growth across all health insurance markets. This means that income-related cost protections like these will need to be paired with systemwide efforts to slow medical spending. These efforts could include: innovation in care organization and provider payment to achieve greater value and better health outcomes, addressing the increasing concentration of insurer and provider markets through antitrust policy,8 and slowing the growth rate of prescription drug costs.9 Policymakers will need to recognize that the increasing economic strain of health care costs facing middle-income and poor Americans is driven by multiple interrelated factors and will require a comprehensive solution.

This issue brief analyzes state-by-state trends in private-sector health insurance premiums and deductibles for the under-65 population from 2008 to 2017.

Total premium and other insurances costs are compared with median household incomes for the under-65 population in each state. Income data come from the U.S. Census Bureau’s Current Population Survey (CPS) of households, and are adjusted slightly to account for the likelihood that individuals residing in the same household are likely to purchase health insurance together (referred to as a health insurance unit). Note that the CPS revised its income questions in 2013, affecting the denominator in our ratio estimates: prior to 2014, this is derived from the traditional CPS income questions, while ratio estimates from 2014 are derived from the revised income questions. Two years of CPS date ending in the stated year are combined to generate reliable state-level income estimates (e.g., 2017 median income estimates are combined 2017 and 2018 CPS data).

The premiums presented represent the average total annual cost of private group health insurance premiums for employer-sponsored coverage, including both the employer and employee shares. We also examine trends in the share of premiums that employees pay and average deductibles. We compared average out-of-pocket costs for premiums and average deductibles to median income in states to illustrate the potential cost burden of each and the total if the worker/family incurred these average costs. The Agency for Healthcare Research and Quality reports MEPS–IC premium, employee contribution, and deductible data separately for single (employee only) and family plans; we include these data in Tables 1 through 4. However, average employee out-of-pocket costs (Tables 5 and 6) are combined estimates, weighted for the distribution of single-person and family households in the state. For example, the average total employee premium contribution reported in Table 5 is equal to (MEPS–IC single-plan contribution for state i * share of single person households in state i) + (MEPS–IC family plan contribution for state i * share of multiple person households in state i). The same approach is used to calculate average total deductibles. Average combined employee premium contribution and deductible — also referred to as total potential out-of-pocket spending — is the sum of the household distribution weighted premium contribution and deductible estimates.