The ACA helped stabilize health costs for many small businesses that provide coverage, with the rate of premium increases falling by half since 2010

Efforts to fully repeal the law have failed so far, but Congress did significantly alter it by repealing the individual mandate penalty. In addition, the Trump administration has announced changes that will undermine the individual marketplace, including increasing the length of time a person can use short-term health insurance and allowing associations to offer group plans that don’t meet the ACA’s requirements. These changes ignore the significant benefits the ACA have offered the small-business and self-employed communities.

Prior to the ACA, small businesses and their employees comprised a disproportionate share of the working uninsured. In 2011, six of 10 of the nation’s uninsured workers were self-employed or working at companies with fewer than 100 employees.2 Recent analyses show significant gains in coverage for small-business owners, the self-employed, and small-business employees, with significant decreases in uninsured rates as a result of access to ACA marketplaces and the expansion of Medicaid in many states.

Many small businesses can now more easily afford to offer coverage to their employees. The ACA’s market regulations ban insurers from setting premiums based on the health and demographic profile of a company. Fears that the ACA would lead to drops in offer rates from employers were unfounded. While certain provisions of the law need to be strengthened, this brief reviews the evidence and finds that the ACA has helped small businesses and their employees access more affordable and comprehensive health insurance.

Drop in Uninsured Rates for Small Businesses Under the ACA

Prior to the ACA, small-business employees and self-employed individuals were much more likely to be uninsured than were employees of larger companies. The costs associated with providing coverage meant that small businesses were often unable to offer employer-sponsored coverage. Additionally, most insurance companies charged higher rates to people with preexisting conditions or discriminated based on health status, gender, or other characteristics, such as industry type. Market regulations, the ACA marketplaces, and subsidies have led to a significant decrease in the uninsured rates for the small-business community.

According to U.S. Census data, in 2013 there were 36.3 million nonelderly adults in the United States working for a business with fewer than 50 employees, 28.1 percent of whom were uninsured. At that time, uninsured small-business employees accounted for 40 percent of all uninsured workers in the U.S.3

There have been significant decreases in the uninsured rates since the implementation of the ACA. In 2016, there were 36.1 million people working at a business with fewer than 50 employees. Of those, 19.4 percent were uninsured.4

There have been similar gains in coverage for self-employed individuals. Twenty-nine percent of self-employed adults were uninsured in 2013.5 As of 2016, this rate had fallen to 19.2 percent. Almost 12 percent of these individuals found coverage through Medicaid, with additional insurance gains coming from marketplace enrollment.6

Many self-employed individuals and small-business employees gained access to health insurance because of expanded Medicaid eligibility. The ACA allowed states to expand Medicaid coverage to adults with income at or below 138 percent of the federal poverty level (about $16,600 for an individual and $34,000 for a family of four). As of 2018, 33 states and the District of Columbia have expanded Medicaid, resulting in significant decreases in uninsured rates within these states.9

In Medicaid expansion states, uninsured rates declined on average from 18.4 percent in 2013 to 9.1 percent in 2017.10 In states that did not expand Medicaid, the percentage of uninsured adults decreased from 22.7 percent in 2013 to 19 percent in 2017, a significantly smaller decline. Medicaid expansion has directly benefitted small-business owners and their employees. The rate of self-employed individuals covered through Medicaid rose from 7.3 percent to 11.6 percent between 2013 and 2016.11 Similarly, the percentage of small-business employees covered by Medicaid rose from 9.1 percent to 13.4 percent over the same time period. By 2015, the Center on Budget and Policy Priorities estimates that 1.7 million small-business employees gained coverage through the expansion of Medicaid.12 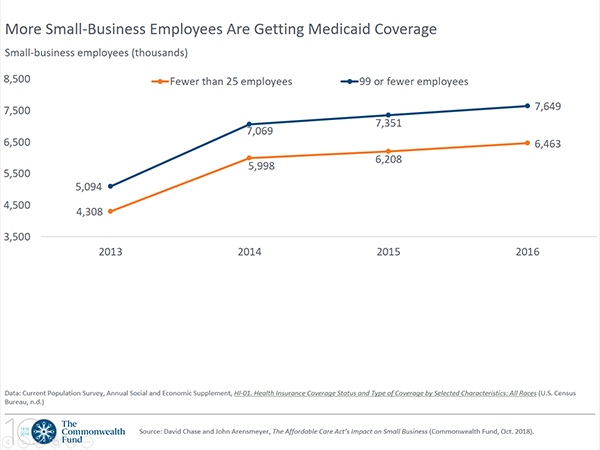 According to a June 2018 report from the Kaiser Family Foundation, among states that did not expand Medicaid coverage, an estimated 2.2 million adults are in the so-called coverage gap.14 This means they currently do not qualify for Medicaid nor do they earn enough to purchase their own coverage in the individual marketplace, but would qualify for Medicaid if their state were to expand. Of these individuals, which include 1.1 million working adults, half (50%) work for small businesses with fewer than 50 employees and an additional 6 percent work at businesses with 50 to 99 employees. Roughly 616,000 small-business employees could gain coverage if all remaining states expanded Medicaid.

Premiums Stabilizing for Small Businesses and Their Employees

Many small businesses offering health insurance coverage have seen slower annual premium increases in the years following the ACA. Since 2010, the increase in small-business health care premiums has been at the lowest level in years, following regular double-digit increases prior to the law’s enactment (Exhibit 2). 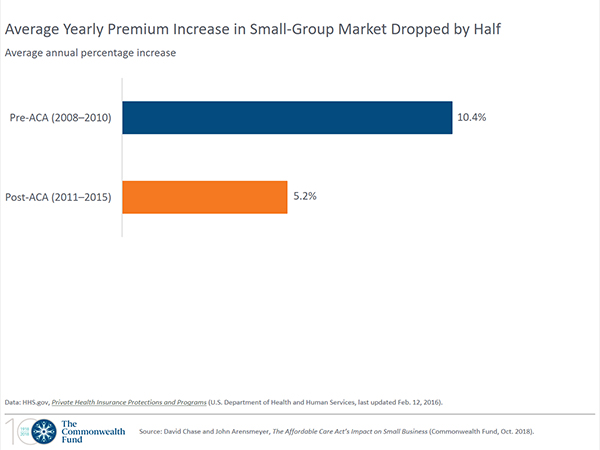 More data from the Kaiser Family Foundation’s 2017 Employer Health Benefits Survey show that premiums continue to be stable for small businesses that offer coverage to their employees. For all firms with between three and 199 employees, the average premium increase from 2016 to 2017 was less than 1 percent. This is lower than the average premium increases from 2016 to 2017 across all firm sizes, which are 4 percent for single coverage and 3 percent for family coverage.15

Analysis of data from the Agency for Healthcare Research and Quality reveals further evidence of lower average annual increases in premiums for small businesses after the implementation of the ACA. According to the report, the average premium percent change for an employee of a business with fewer than 50 employees was just 3.1 percent between 2011 and 2015, down from 5.1 percent between 2006 and 2010 (Exhibit 3).16

In addition to lower overall premium increases, employee contributions for employer-sponsored coverage have also stabilized at small businesses; workers at small firms with individual coverage paid on average just $9 more toward their premiums in 2017 than they had in 2016.17 However, recent policy changes, such as the repeal of the individual mandate and weakening of ACA requirements, may cause premiums to increase in future years faster than they would have otherwise. It remains to be seen how these anticipated increases will impact small-group coverage purchased through the individual marketplaces.

Critics of the Affordable Care Act argued that it would cause a large number of employers to stop offering health insurance, but the data do not support this assertion.

Comparisons in coverage from before and after the ACA show a decline in the rate of employers offering health coverage that began well before the passage of the law. According to the Kaiser Family Foundation, the percentage of firms offering employer-sponsored health coverage decreased from 66 percent in 1999 to 59 percent in 2009, the year before the ACA was passed. For firms with three to 199 workers, this amounts to an average annual decrease in coverage of 0.6 percent.18

Data show that offer rates have stayed roughly the same post-ACA, and that slight declines have been in line with national trends that predate the ACA. Overall, the average annual decrease in offer rates between 2012 — the first year of major coverage expansions under the ACA — and 2017 was 0.75 percent, showing that the number of small employers offering coverage was dropping on average by less than 1 percent before the ACA’s primary implementation and is still dropping on average less than 1 percent after the ACA for firms with between three and 199 workers (Exhibit 4).

Critics of the ACA also predicted that the employer mandate for companies with more than 50 employees would lead to job loss or reduction in labor hours, as employers would cut jobs or move full-time employees to part-time to reduce health care costs. Thus far, there is no evidence or analysis that has indicated the ACA has had negative effects on employment or labor hours.19

As this issue brief shows, the creation of the individual marketplaces and the expansion of Medicaid have resulted in more small-business owners and employees accessing health coverage than before the ACA was implemented. Many small businesses that provide coverage to their employees have also seen costs stabilize during this time.

7. Adam Looney and Kathryn Martin, “One in Five 2014 Marketplace Consumers Was a Small Business Owner or Self-Employed,” Treasury Notes (blog), U.S. Department of the Treasury, Jan. 12, 2017. 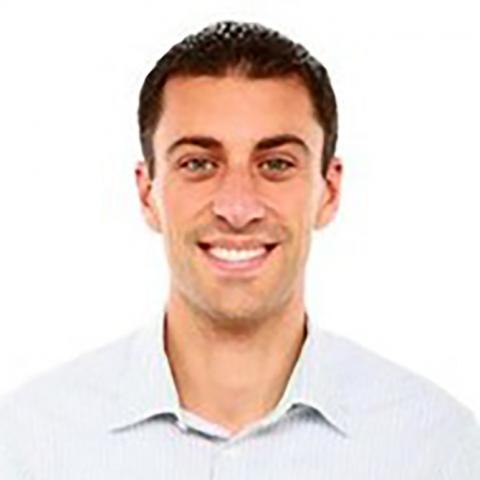 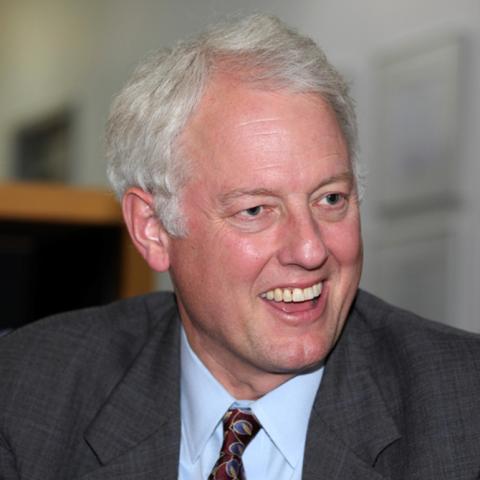