T., a 27-year-old mother, in her apartment outside Dallas on May 15, 2022. States like Texas with restrictive abortion policies have higher rates of maternal and infant mortality, especially among women of color, as well as greater racial inequities across their health care systems. Photo: Erin Schaff/New York Times via Redux Pictures

In anticipation of a U.S. Supreme Court decision overturning Roe v. Wade, a number of states passed “trigger laws” that would ban all, or nearly all, abortions once national abortion protections ended. In the months since the Court’s ruling in Dobbs v. Jackson Women’s Health Organization in June 2022, several of these states have in fact banned abortion in most instances.1 Other states have enacted bans or severe restrictions since then, and others may do so in the coming months or years.2

In this brief, we assess the current state of maternal and infant health in these states, identify weaknesses in perinatal care systems, and consider how abortion bans may exacerbate these weaknesses. We compare states that have current or proposed abortion bans or restrictions with states that are unlikely to pass such restrictions, focusing on the following areas:

For our analysis, we compared health status and health care resources in the 26 states that the Guttmacher Institute has identified as having “restrictive,” “very restrictive,” or “most restrictive” policies on abortion — which we refer to as “abortion-restriction states” — to those in the 24 “abortion-access states” that, along with the District of Columbia, have not instituted bans or new restrictions on abortion.3

Demographic Comparison of States With and Without Abortion Restrictions 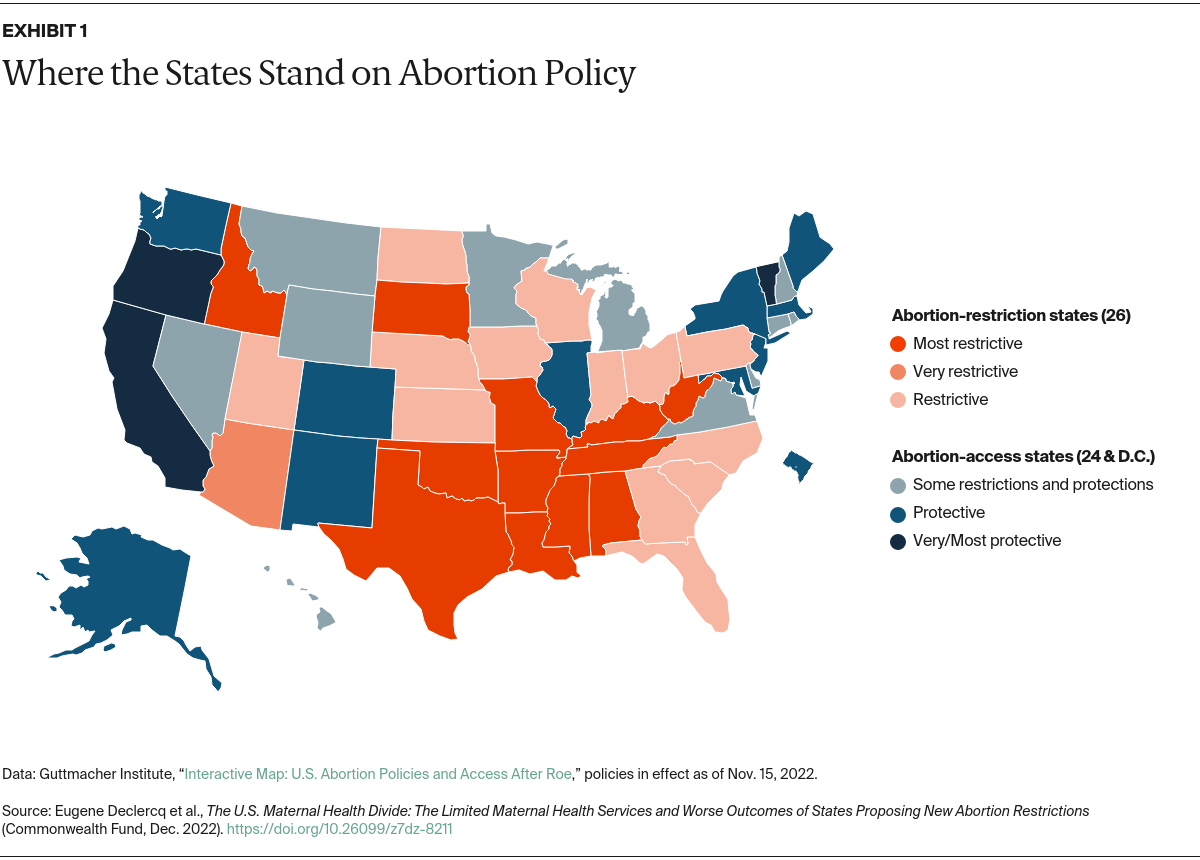 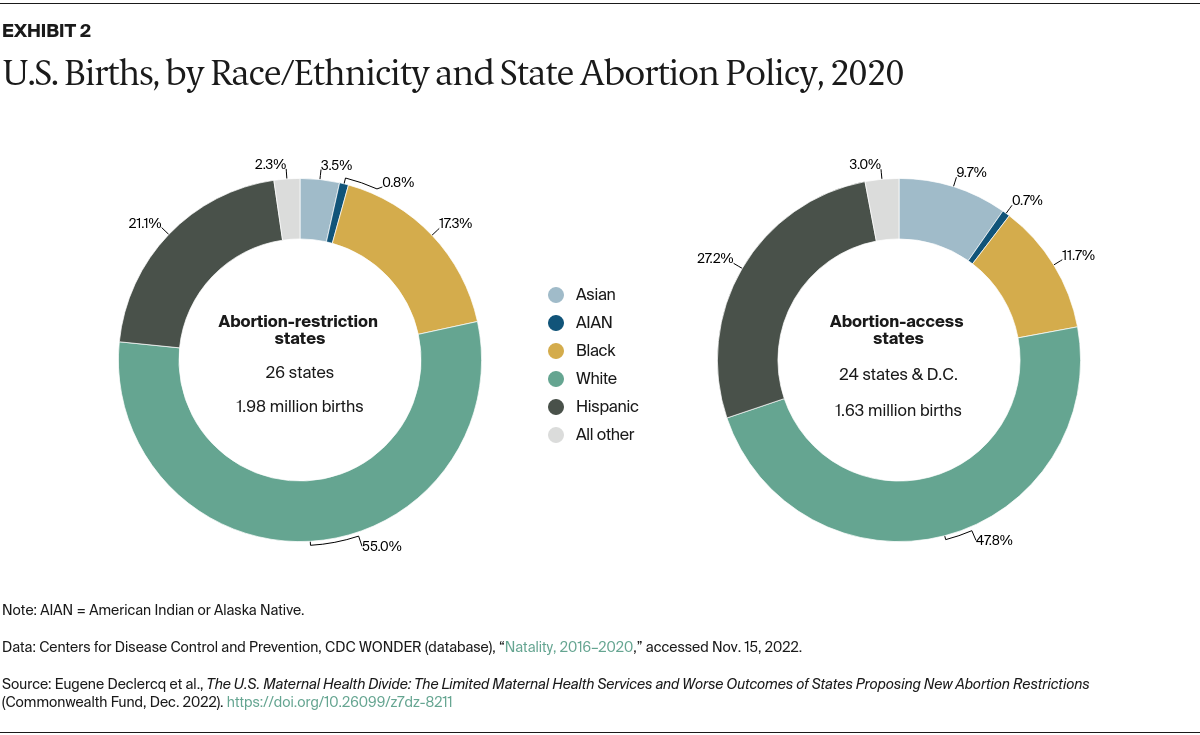 As Exhibit 3 shows, abortion-restriction states also have fewer maternal care providers than states with abortion access, including a 32 percent lower ratio of obstetricians to births and a 59 percent lower ratio of certified nurse midwives to births. After the Dobbs decision, this disparity could worsen, as some maternity care providers have been reported to be reluctant to work in states where they might face legal challenges to their practice.5

The lack of maternity resources could mean not only more limited access to birthing services but also greater difficulty for pregnant people in accessing early and continuous prenatal care.6 In abortion-restriction states in 2020, the proportion of individuals giving birth who had no prenatal care or late prenatal care was 62 percent greater than for someone giving birth in abortion-access states (7.3% vs. 4.5%; data not shown). 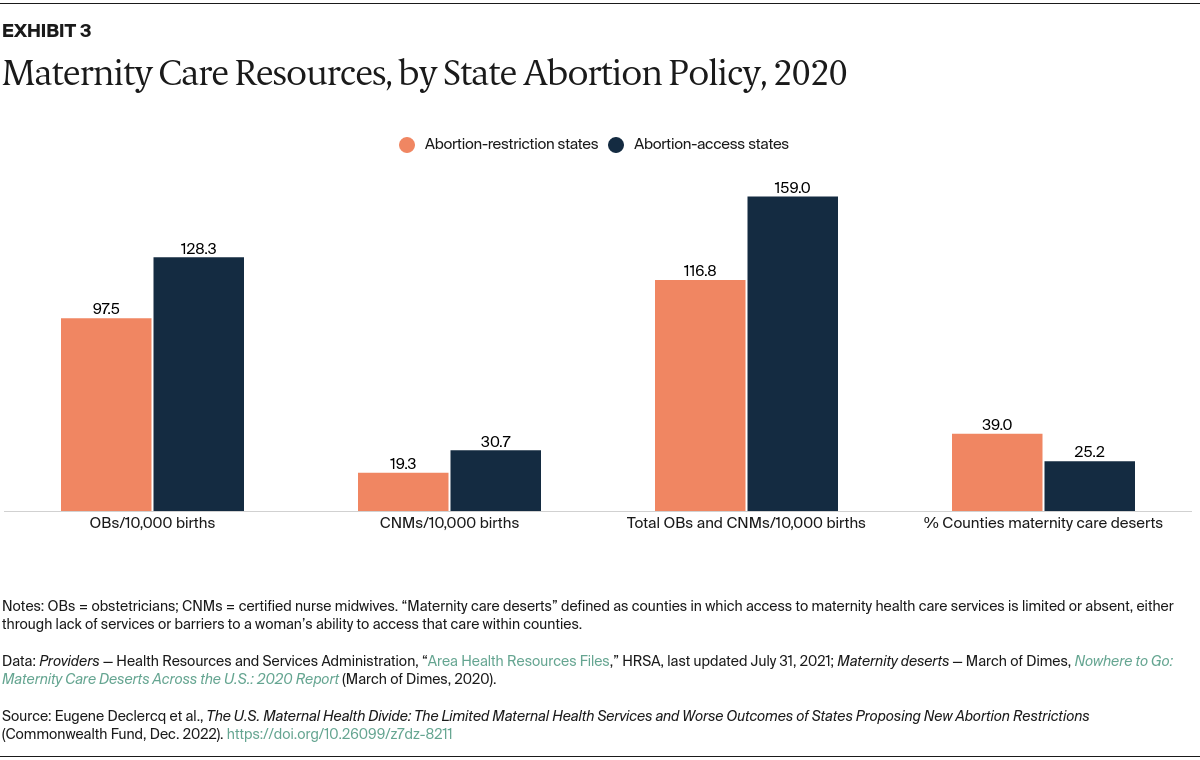 To compare maternal death rates (deaths during pregnancy, at birth, or within 42 days of birth) in states with abortion bans or restrictions to those without, we examined the most recent three years of data.7 We found that maternal death rates were 62 percent higher in 2020 in abortion-restriction states than in abortion-access states (28.8 vs. 17.8 per 100,000 births). Notably, across the three years presented in Exhibit 4, the maternal mortality rate was increasing nearly twice as fast in states with abortion restrictions. 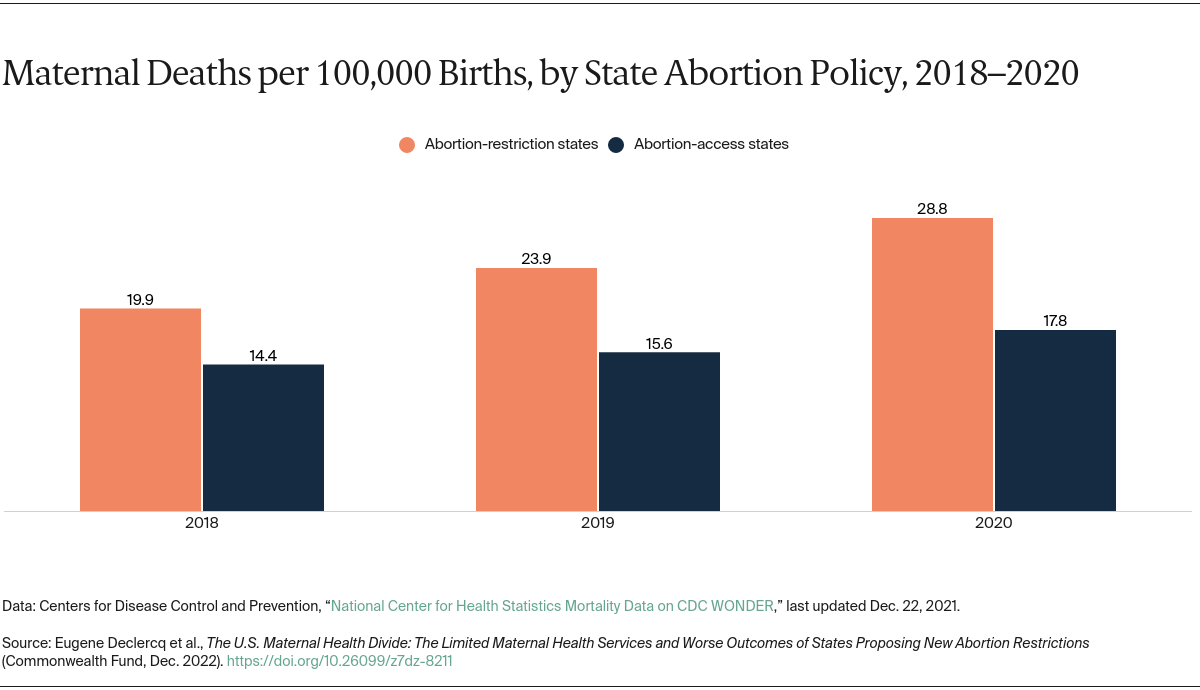 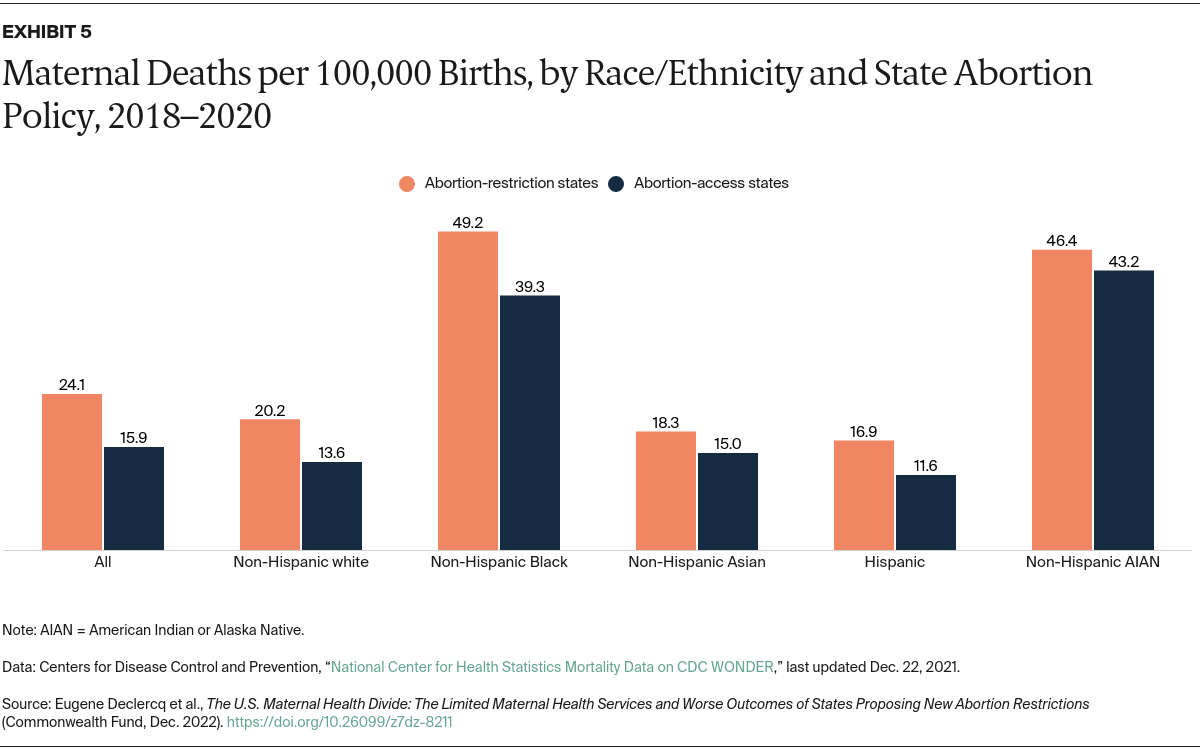 The differences among states are not limited to pregnancy-related deaths. As shown in Exhibit 6, overall death rates for women of reproductive age (15–44) in abortion-restriction states were 34 percent higher than in abortion-access states (104.5 vs. 77.9 per 100,000 people). 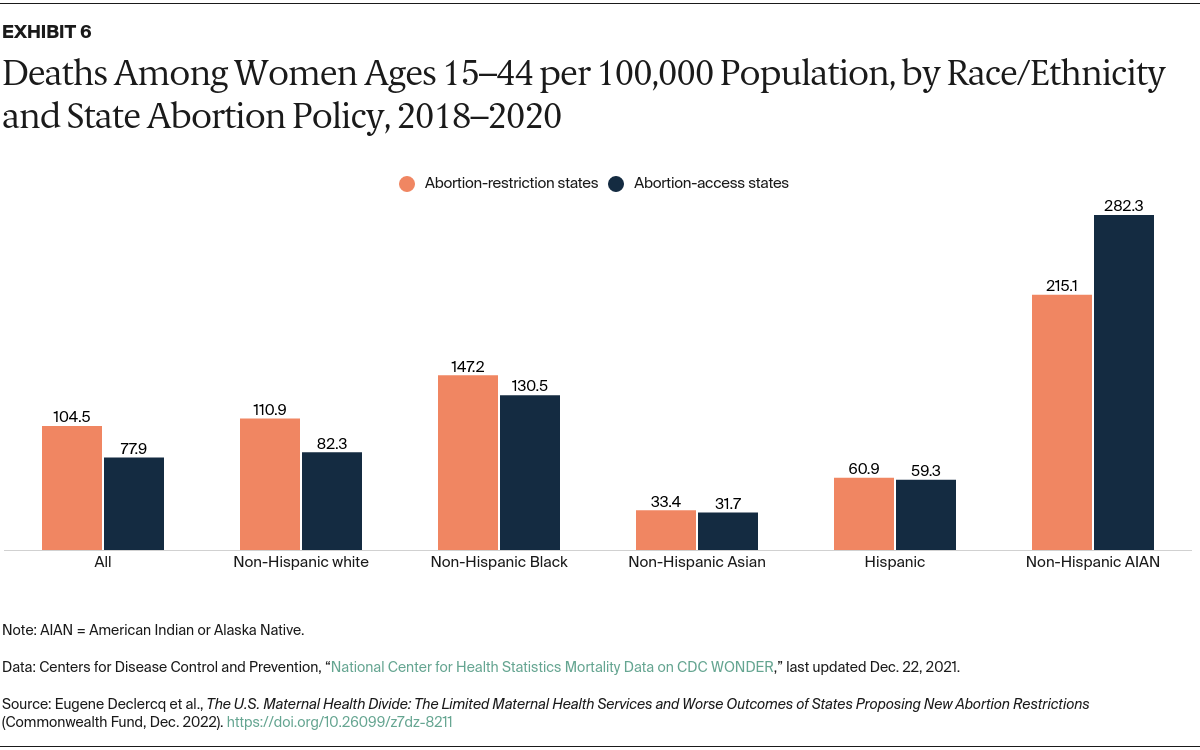 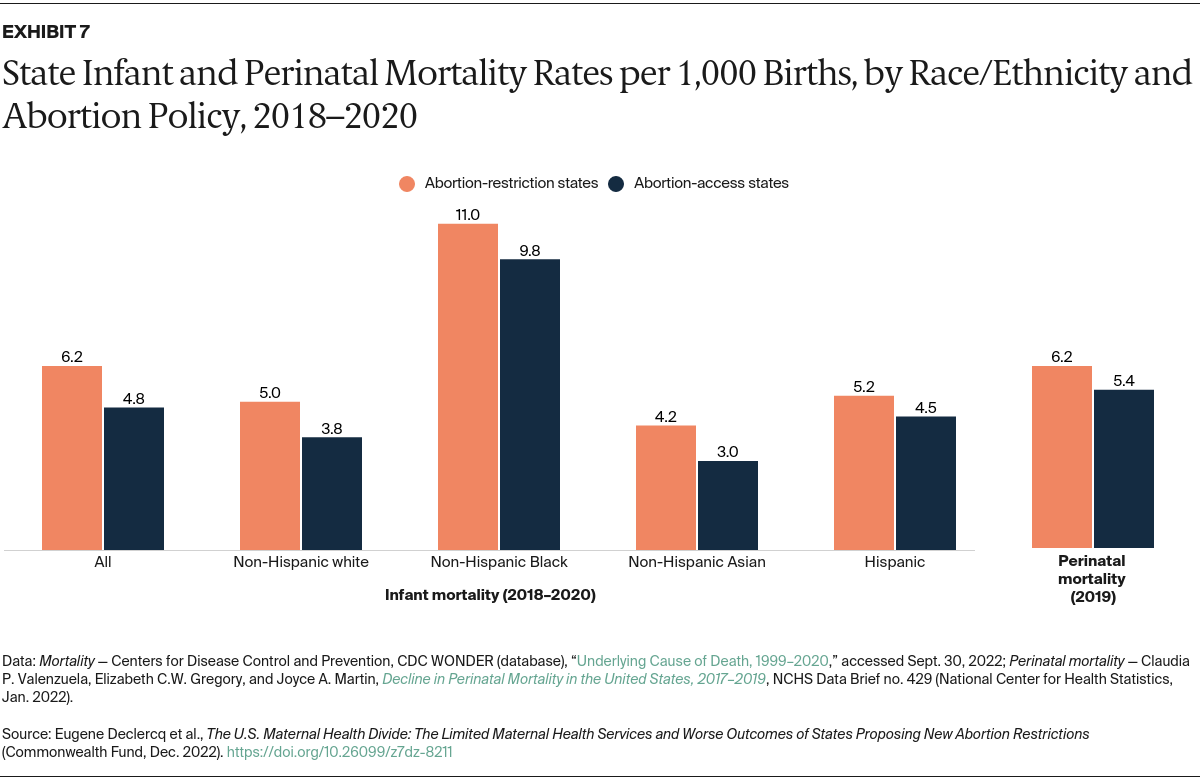 We also compared states with and without abortion bans or restrictions based on the Commonwealth Fund’s health equity scorecard, a national dataset that assesses how state health care systems in the U.S. are functioning for people of color.10 Each state’s score is based on 24 health system performance indicators across the following three domains: 1) outcomes related to premature death (for example, breast cancer deaths); 2) access to health insurance and health care providers (such as adults age 18 and older who have a usual source of care); and 3) quality and use of preventive care services (such as adults age 18 and older who received a flu shot in the past year).

The scores in Exhibit 8 are average percentile scores on overall performance across the three domains (a higher score reflects greater equity). Abortion-access states perform better overall for both white and Black people than abortion-restriction states do. 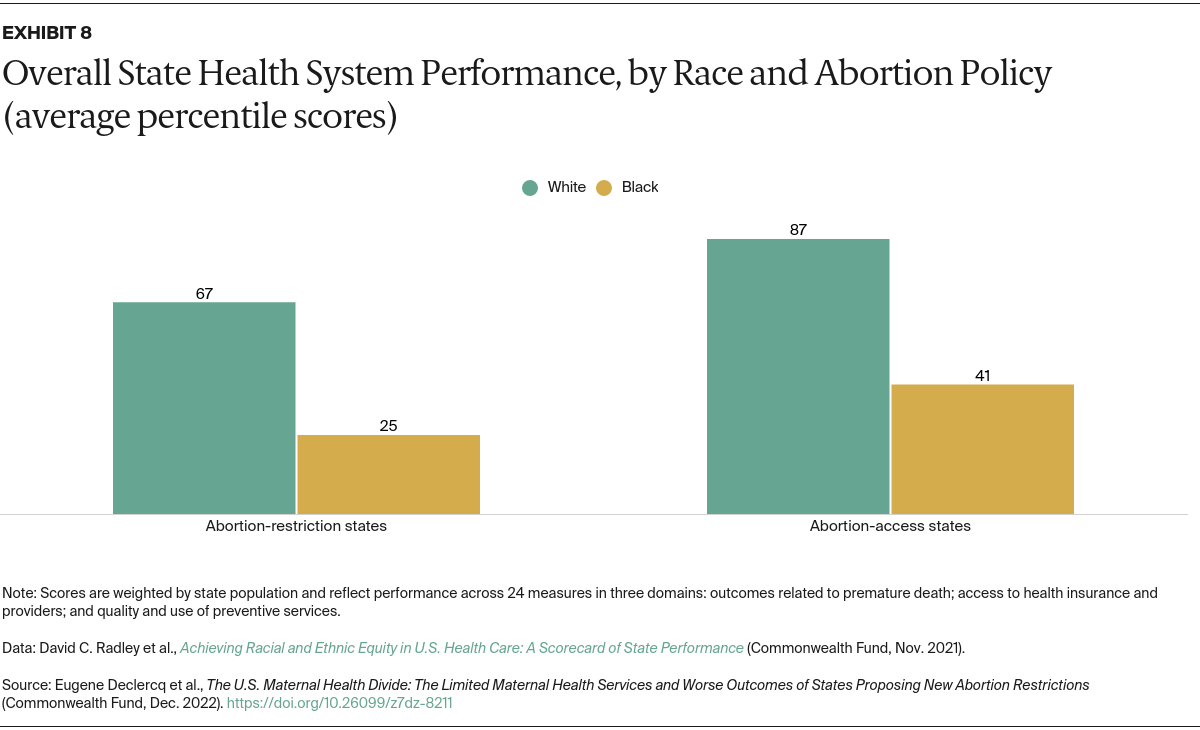 Differences in Generosity and Duration of State Medicaid Coverage

In 2020, a larger proportion of births in abortion-restriction states were Medicaid-reimbursed or self-pay compared to abortion-access states (Exhibit 9). 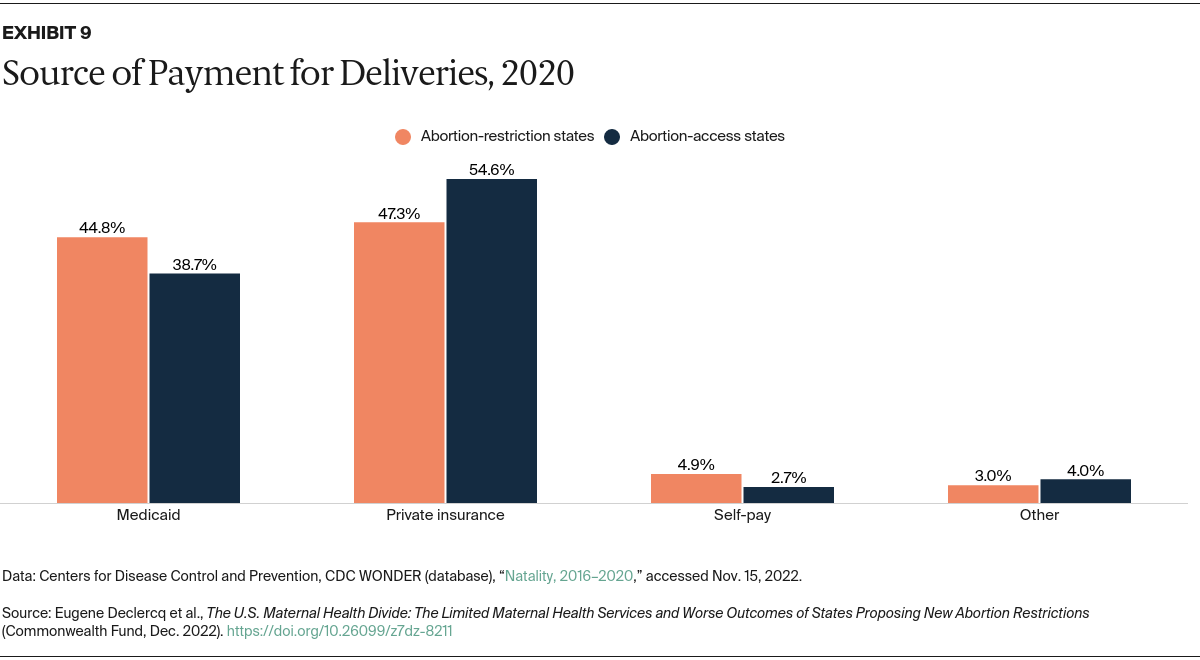 When looking at state differences in eligibility levels of Medicaid coverage, we find that in the 39 states that have expanded Medicaid eligibility for adults under the Affordable Care Act, the income eligibility level for adults ages 18 to 64 is set at 138 percent of the federal poverty level, or FPL (which is $31,781 for a family of three in the 48 contiguous states and the District of Columbia).11 But of the 12 states that have not expanded Medicaid coverage — 10 of which are abortion-restriction states — the income eligibility level for parents in 2022 ranged from only 100 percent of FPL in Wisconsin and 88 percent in Tennessee to a low of 18 percent of FPL in Alabama and 16 percent in Texas.12 (During pregnancy, the maximum income for Medicaid eligibility is raised; it ranges from about 200 percent of FPL in the abortion-restriction states of Kentucky, Missouri, North Carolina, Ohio, and Texas down to the federal minimum, 138 percent of FPL, in Idaho, Louisiana, Oklahoma, and South Dakota.)

The American Rescue Plan Act of 2021 gives states the option of extending Medicaid coverage for up to one year following a Medicaid-financed pregnancy or birth (federal law requires coverage for 60 days postpartum).13 However, less than a third of abortion-restriction states have adopted this coverage extension, or have plans underway to do so, compared with almost half of abortion-access states.

States’ Medicaid policy decisions can exacerbate existing economic and social disadvantages tied to race and geography.14 Such policy decisions help explain why residents of states with abortion bans or restrictions are more likely than residents of states where abortion is legal to begin a pregnancy less healthy, to lack insurance coverage, and to face barriers when seeking maternity and reproductive health care.

Compared with their counterparts in other states, women of reproductive age and birthing people in states with current or proposed abortion bans have more limited access to affordable health insurance coverage, worse health outcomes, and lower access to maternity care providers. Making abortion illegal risks widening these disparities, as states with already limited Medicaid maternity coverage and fewer maternity care resources lose providers who are reluctant to practice in states that they perceive as restricting their practice.15 The result is a deepening of fractures in the maternal health system and a compounding of inequities by race, ethnicity, and geography.

States have it within their power to avoid that outcome. In partnership with health plans, providers, and residents, state leaders could attempt to recruit more maternity care providers — including midwives, physicians, doulas, and nurses — and promote the operation of more birthing facilities, such as hospital units and birthing centers. Additional support could be provided to community-based organizations and to perinatal health care teams, through a combination of Medicaid and public health funding, and provider financial incentives could drive better quality in maternal health care. And by adopting the Affordable Care Act’s Medicaid eligibility expansion for low-income adults and extending Medicaid postpartum coverage to one year, states could enhance the health and well-being of mothers and infants before, during, and beyond pregnancy.

Increased federal funding for reproductive health care, family planning, maternity care, and care delivery system transformations also could mitigate the impact of the Dobbs decision and state abortion bans on people’s lives. State, congressional, and executive branch actions are all needed to protect the health of women and birthing people and ensure optimal and equitable outcomes for mothers and infants.

We drew our data from a wide range of sources, which are noted in the respective exhibits and the appendix. These include national birth and death data from CDC WONDER, the classification of states with maternity care deserts from the March of Dimes, health workforce data from the Area Health Resources Files, and state equity outcomes from the Commonwealth Fund report Achieving Racial and Ethnic Equity in U.S. Health Care: A Scorecard of State Performance.16 The organizations producing the original data were not responsible for this secondary data analysis.

Whenever possible, the most recent data available were used. In some cases where data at the state level may involve smaller numbers (such as maternal deaths), years were combined to provide more stable estimates.

We recognize there’s no definitive characterization of which states will be passing abortion bans in the next few months. In this analysis, we have used the Guttmacher Institute classifications of “restrictive,” “very restrictive,” or “most restrictive” to identify states with abortion restrictions as of November 15, 2022. We understand these classifications can shift over time, but the general pattern of differences has remained consistent. We also recognize that in some states listed as nonrestrictive, certain restrictions exist, but these are balanced by some protections as well.