A national study of primary care and specialist physicians finds that while increasing numbers use a basic electronic health record (EHR)—from nearly 34 percent in early 2011 to 44 percent in March 2012—only a small percentage use EHRs’ more advanced functionality.

The Centers for Medicare and Medicaid Services (CMS) has issued "meaningful-use" standards for EHRs. Providers meeting specific criteria—for instance, using EHRs to report their performance on quality measures—are eligible to receive incentive payments from CMS. In a Commonwealth Fund–supported study, researchers surveyed physicians to learn how many are using EHRs and the trends and challenges in meeting meaningful-use requirements. 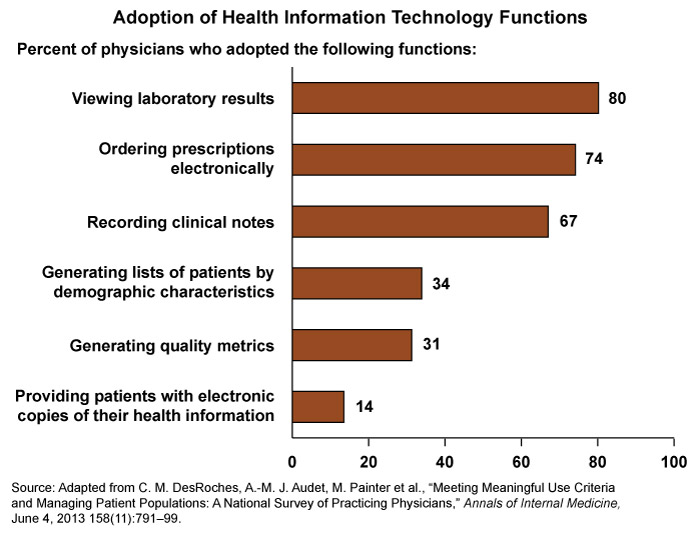 In instances where EHR systems with advanced functionality were implemented, physicians said they were not always easy to use. "Using EHRs as simple replacements for the paper record will not result in the gains in quality and efficiency or the reductions in costs that EHRs have the potential to achieve," the authors write. To encourage physicians to take advantage of the broad range of EHR functionality, physicians may require assistance with implementation, training, and upgrading systems. In addition, further research on usability could help realize the full potential of these tools.

The researchers surveyed approximately 2,000 primary care physicians and 1,400 specialists randomly selected from a sample obtained from the American Medical Association from October 2011 to March 2012. The survey inquired about measures of EHR adoption previously developed by the Office of the National Coordinator for Health Information Technology. Additional items explored care coordination, use of quality information, and participation in payment incentive programs.

Adoption of basic electronic health records has increased over the past year, from nearly 34 percent in early 2011 to 44 percent by March 2012. More advanced use of EHRs to exchange information among providers and to allow physicians to manage all of their patients is still a challenge. Additional training and assistance may be needed to encourage physicians to reap the full benefits of EHRs.