Accountable care organizations (ACOs) in Medicare are up and running, but little is known about the initial participants in these programs. After analyzing the baseline characteristics of early adopters, researchers found that patients enrolled in the ACOs were more likely than nonenrolled patients to be older than 80 and to have higher incomes. Fewer than half the ACOs included a participating hospital. At baseline, there was little difference between these hospitals and non-ACO hospitals in performance on quality metrics. 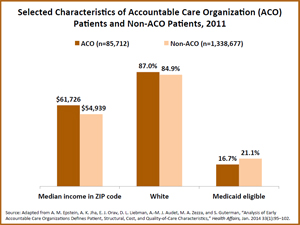 To improve health care quality and curb costs, the Affordable Care Act established programs designed to change the way care is delivered and providers are paid. Two Medicare initiatives—the Shared Savings Program and the Pioneer ACO Initiative—will work toward these goals by working with accountable care organizations (ACOs). In an ACO, doctors, hospitals, and other health care providers agree to collectively care for a group of patients. In return, the providers can share in any savings resulting from the improved coordination of care. In some instances, ACO participants may also be financially responsible if costs run over budget. ACOs also need to meet certain quality-of-care standards.

There is strong enthusiasm for ACOs among policymakers and some health industry leaders, but there is little information available about the early entrants in these still very young programs. This study identified ACOs that had joined the Medicare programs as of fall 2012 to collect baseline information about their patient populations, quality, hospitals, and costs.

“Although modest, the differences in socioeconomic characteristics between patients in ACOs and other patients raise concerns about ensuring that people of lower socioeconomic status have equal access with those of higher socioeconomic status to any benefits that ACOs may provide,” the authors write. Noting that more than half the ACOs did not include a hospital participant, they reason that the ambulatory care providers that formed many ACOs may have been reluctant to include hospitals, which face inherent pressure to fill beds. And while the relative lack of for-profit hospitals participating in ACO programs is somewhat puzzling, the researchers say this may simply reflect caution, as these facilities wait to see how the early entrants fare before jumping in themselves.

Using publicly available data from the Centers for Medicare and Medicaid Services, the authors identified 148 ACOs that had signed up for one of the two federal programs by fall 2012. Of those ACOs, the authors were able to contact participants at 123 organizations. By January 2013, 254 ACOs had joined the two programs. Data for this study were gathered from Medicare claims and enrollment files, the American Hospital Association’s 2011 Annual Survey of Hospitals, the U.S. census, and the Dartmouth Atlas of Health Care.

As ACOs take hold, it will be critically important to track their performance over time, monitor how ACOs with hospitals fare compare to those without, and make sure patients from different  socioeconomic backgrounds can benefit from these new models.