According to the first-ever survey of public and private accountable care organizations (ACOs), 51 percent of ACOs are physician-led, with another 33 percent jointly led by physicians and hospitals. In more than three-quarters of ACOs (78%), physicians make up a majority of the governing board. Two of five ACOs have physician ownership. Physician-led ACOs may face challenges in managing care across settings because they are less likely to include hospitals and postacute care providers.

"It seems likely that the challenge of fundamentally changing care delivery as the country moves away from fee-for-service payment will not be accomplished without strong, effective leadership from physicians."

The Affordable Care Act is providing incentives for health care providers to form accountable care organizations (ACOs)—groups of providers that are held collectively responsible for the care of a specific population of patients. One major challenge is ensuring that ACOs have both the clinical and managerial expertise to transition away from the fee-for-service model toward team-based, accountable care. This Commonwealth Fund–supported article reports on findings from a new national survey of ACOs that examined the extent to which physicians are engaged in the leadership of ACOs, have boards that are run by physicians, and are physician-owned. 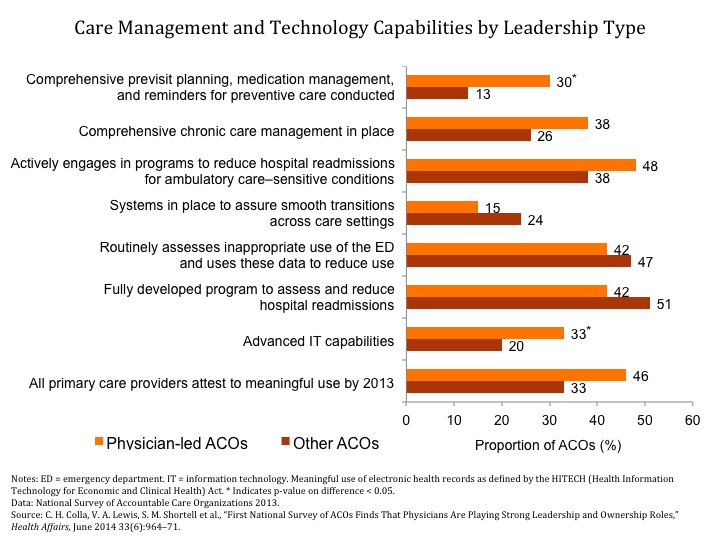 “In spite of initial concerns about potential hospital dominance, physicians are at the forefront of leadership in the early implementation of the ACO payment and delivery model,” write the authors. Because they are less likely to include hospitals or postacute care facilities, physician-led ACOs may face greater challenges in helping patients transition between settings. They are less likely to include pharmacy or behavioral health services, making it more difficult to track medication compliance or follow up on mental health referrals. The authors also note that because physician-led ACOs are more focused on outpatient care, they may be able to reduce the use of inpatient or postacute care and to address the overuse of certain health care services. Because it is not yet clear which characteristics are essential to performance, the authors stress that policymakers and payers should continue to provide different types of support and contracts to foster the development and success of ACOs.

The researchers examined data from the first wave of the National Survey of Accountable Care Organizations, fielded October 2012 to May 2013. The survey was completed by ACO executives, including CEOs, executive directors, and chief medical officers. The final sample included 173 ACOs.

Physicians are at the forefront of ACO leadership: 51 percent of ACOs are physician-led, with another 33 percent jointly led by physicians and hospitals.