Following the significant improvements made to HealthCare.gov and state-operated health insurance marketplace websites in November, Americans are continuing to sign up for the Affordable Care Act’s new coverage options. With coverage for many people beginning on January 1, we take a look at enrollment trends across the nation. 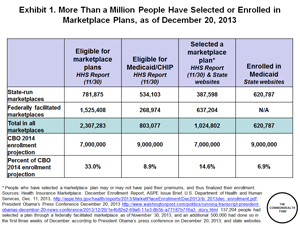 A December Enrollment Surge. The latest enrollment figures for marketplace plans from the 14 states and the District of Columbia running their own marketplaces—and new information from the Obama Administration—show that enrollment has climbed to more than a million people, about five times our last estimate reported on November 21 (Exhibits 1 and 2). The new total, which includes people who have selected plans but may or may not have paid their premiums, is up from an estimated 364,682 people who had selected a plan or enrolled by November 30, according to the Department of Health and Human Services’ December enrollment report, released last week.

Our estimate also likely under-reports enrollment in states like California and New York where enrollment has surged in recent days, as Sarah Kliff of The Washington Post reports  (Exhibit 3). California’s marketplace director, Peter Lee, told reporters this week that enrollment had increased to 15,000 per day in that state. According to the state’s marketplace website, more than 53,000 people signed up in the first three days of this week alone. Our numbers only include enrollment posted on the state’s website through December 7, and for December 16–19.

Enrollment is now about 14.6 percent of the 7 million people that the Congressional Budget Office projected will gain coverage through the marketplaces next year, up from 2.9 percent in mid-November.

Many states continue to report significant enrollment in Medicaid and the Children’s Health Insurance Program (CHIP) as well. Among states running their own marketplaces and reporting Medicaid enrollment, more than 620,000 people have enrolled in the program, up from about 345,000 in our November report (Exhibit 4). HHS reported this month that about 269,000 people were found to be eligible for Medicaid or CHIP through the federal marketplaces, but did not report actual enrollment. Thus, excluding enrollment in states with federal marketplaces, this is about 6.9 percent of the 9 million people projected to gain coverage through the program next year, up from 3.8 percent in mid-November. 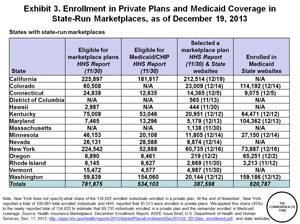 Who’s Enrolling? While it is still too early to assess the age and health distribution of marketplace enrollees, young adults are enrolling in health plans. Young adults have disproportionately high rates of uninsurance and their participation is critical to balancing risk in the marketplaces and helping stabilize premium growth over time.

The Kaiser Family Foundation estimates that nationwide about 40 percent of Americans who are potentially eligible for individual market coverage are between the ages of 18 and 34.  It has been expected that enrollment among younger and healthier people would lag that of those who are older and in poorer health in the initial months of enrollment. Given that open enrollment lasts through March 31, there is considerable time left for young people to enroll in plans. An October Commonwealth Fund survey of people potentially eligible for the law’s new coverage options found that a majority (58%) of young adults in the survey who had not yet enrolled said they were likely to go to the marketplaces and shop for a health plan by the end the open enrollment period. And Kaiser projects that even if the enrollment age mix is below this level in some states, several provisions in the law will help mitigate the risk of significant premium increases in 2015.1 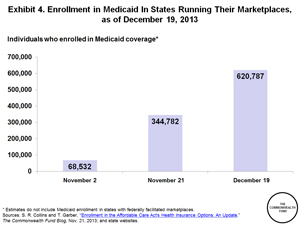 Looking Forward. People who want their health insurance to begin on January 1 will need to select a plan either through the marketplaces or directly through an insurance carrier in most states by December 23. Those who have selected a plan now have until December 31 to pay their premiums for coverage beginning on January 1. In addition, most major insurance companies have agreed to provide a grace period of 10 days in January. This means that if people pay their premiums by January 10, their coverage would be retroactive to January 1. And some states have further extended their sign-up and payment deadlines: Maryland to December 27 and January 15, and Rhode Island to December 31 and January 6. Oregon and Washington have also announced extensions.

With enrollment open through March 31, those who are without coverage still have a few months to sign-up if they miss deadlines for coverage beginning in January. Enrolling in a plan in January will enable someone to have health insurance beginning in February, for example. The Commonwealth Fund will continue to update this post throughout the open enrollment period.

1 These include the ability of carriers to charge older people premiums that are as much as three times higher than younger enrollees and the fact that insurers that face higher-than-expected claims costs relative to their premium revenues will be partly compensated through the law's so-called "risk corridor program."