The percentage of Americans without health insurance declined slightly from 15.7 percent in 2011 to 15.4 percent. The early provisions of the Affordable Care Act—most notably the option, since 2010, for young adults to stay on their parents’ insurance policies—have helped turn the tide in the growth of the uninsured in the U.S., which had increased by 12 million people between 2001–2010. Increases in the percentage of people covered through Medicare and Medicaid also helped to stabilize the uninsured rate.

But the lack of marked improvement in 2012 underscores the need for the coverage provisions at the center of the reform law, which will provide millions of Americans without health insurance new opportunities for affordable coverage beginning in January 2014. 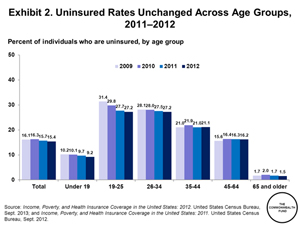 Young Adults. The percentage of young adults without health insurance has fallen by more than 4 percentage points since 2009, declining from 31.4 percent to 27.2 percent in 2012 (Exhibit 2), or more than 1 million individuals. This marks a reversal in the growth in the uninsured in this age group over the last decade, and is likely attributable to the Affordable Care Act; young adults under age 26 may now stay on or join their parents' health plans. However, the flattening out of gains in coverage in 2012 in this age group suggests that many uninsured young adults are unable to join a parent’s policy, and will benefit from the new affordable insurance options set to roll out over the next few months.

Private Insurance. Despite concerns that the health reform law will cause employers to drop health insurance coverage, the share of people with employer-based coverage did not change last year. About 55 percent of the population has health benefits through their own employer, or that of a spouse, partner, or parent, which is unchanged from 2011 (Exhibit 3). There was also no change in the percentage of people who were uninsured who were employed full time (15.5%) or less than full time (27.7%) over 2011–2012.

Public Insurance. Public insurance coverage, including Medicare, Medicaid, and the Children’s Health Insurance Program (CHIP), continues to be a critical source of coverage for people of all ages without job-based health insurance. In fact, the percentage of people with coverage through a government program, including the military, climbed from 32.2 to 32.6 percent. This is likely a major reason why a smaller share of people were uninsured in 2012 overall. More than 101 million people had health insurance through government programs in 2012, up from 99.5 million people in 2011. The percentage of people covered by Medicaid stood at 16.4 percent in 2012, or 50.9 million (Exhibit 4). Medicaid coverage has helped people of all ages, but children and older adults particularly benefit. More than one-third (36%) of children under age 18 are now insured through Medicaid or CHIP. And more than 40 million people age 65 and over, the post–World War II “boomers,” are enrolled in Medicare.

The Affordable Care Act’s Promise. Families with incomes under $50,000 continue to be the income group most likely to lack health insurance. A quarter (24.9%) of people with incomes under $25,000 were without health insurance in 2012 and one of five (21.4%) of those in families with incomes between $25,000 and $50,000 were uninsured. Families in this income range will realize the greatest benefits from the full implementation of the Affordable Care Act in January 2014, through a substantial expansion in eligibility for Medicaid and premium tax credits to offset the cost of private health plans to be sold through the new state insurance marketplaces. However, so far only about half the states have decided to participate in the Medicaid expansion next year, placing the health security of the nation’s most financially vulnerable families in doubt.

Massachusetts, which implemented a universal health insurance system in 2006 much like the Affordable Care Act, led the nation in coverage, with just 3.8 percent of its total population, including those over age 65, without health insurance (Exhibit 5). This stands in stark contrast to Texas, where 24.2 percent of the total population is without health insurance, the highest rate in the nation. Seventeen states had uninsured rates that exceeded the national average of 15.6 percent; of those, 11 have not yet decided to expand their Medicaid programs under the Affordable Care Act next year, potentially leaving millions of their residents without access to the law’s coverage protections.

Looking Forward. Today’s Census report reflects the effects of the Affordable Care Act among young adults, the strength of employer-based coverage, and the essential role of public insurance programs in the nation’s health system. But the fact that 48 million people are uninsured today underlines how essential the law’s new insurance options are to families across the country desperately in need of health insurance. The gains in coverage made by young adults since 2009 is a preview of the sweeping changes we will see after the state insurance marketplaces and Medicaid expansions go into effect just three-and-one-half months from now. Full state participation in the Affordable Care Act would ensure that all citizens fully benefit from the protections available under the law.