Premiums Unchanged in Rhode Island, Modestly Higher in Nevada, and Significantly Higher in District of Columbia

With support from The Commonwealth Fund, NORC is building a national database of plans offered on the marketplaces, including final data on premiums, deductibles, out-of-pocket limits, and other elements of benefit design at all levels. In this series of blog posts and an interactive map, we are reporting this information for marketplaces operated by states as it becomes available. Next month, the Department for Health and Human Services will post premium and benefit information for marketplaces operated by the federal government.

Health plans are offered through the marketplaces at four1 levels—bronze, silver, gold, and platinum—with bronze plans being the least generous and platinum plans the most. Premium subsidies for eligible individuals are based on the cost of the second least-expensive silver plan in their region, referred to as a “benchmark” plan. Reductions in cost-sharing amounts are also available to those earning up to 250 percent of the federal poverty level ($29,175 for an individual and $59,625 for a family of four), but only if they enroll in a silver plan.  Households earning 100 to 200 percent of poverty income receive cost-sharing reductions giving the plan a value comparable to a gold or platinum plan.

This is the fourth in a series of blog posts reporting premium and benefit changes for the individual market from 2014 to 2015.  The states reviewed are the District of Columbia, Nevada, and Rhode Island.  These states recently posted final rates for marketplace plans. The sample in Nevada includes one urban, one suburban/small city, and one rural area.2  Rhode Island and D.C. have only one statewide rating region.

The average premium in D.C. increased 11 percent from 2014 to 2015. The average monthly single premium for a 40-year-old, non-smoking adult (before subsidies) across all levels was $264 in 2014 and will be $293 in 2015 (Exhibit 2). In 2014 the average premium for a family of four was $882 and it increased to $978 in 2015 (Exhibit 2).  Using enrollment-weighted data, in contrast, we find consumers enrolled in plans offered in both years would also experience average premium increases of 11 percent (not shown) if they remained in the same plans.  However, consumers that are highly price sensitive will likely move to lower-cost plans in 2015, and therefore one should consider this premium increase as an upper bound figure. 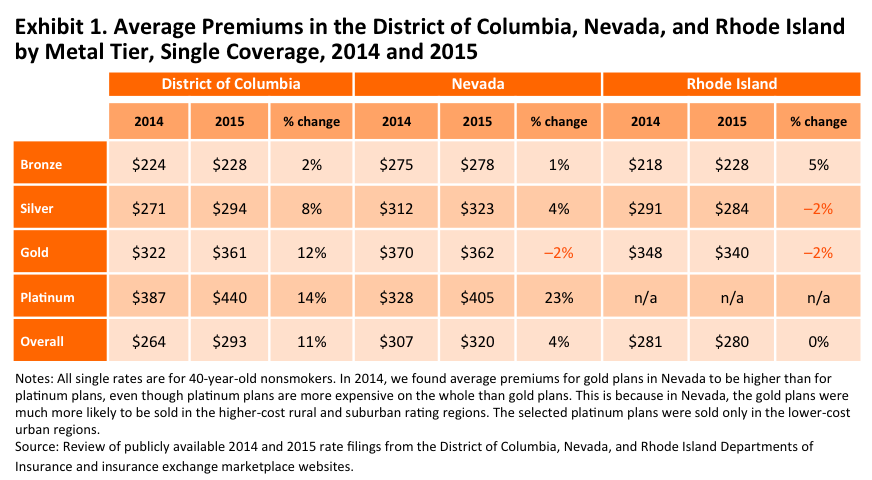 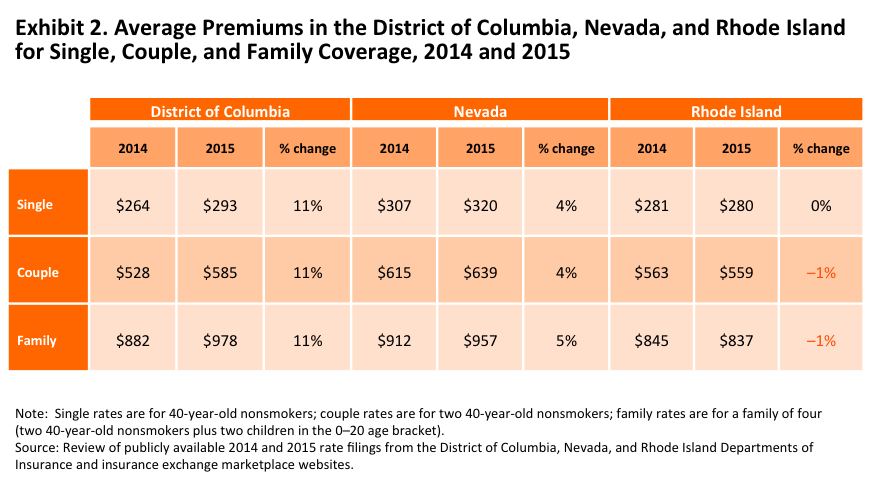 The average premium for the “benchmark” silver plan increased 5 percent—from $242 in 2014 to $253 in 2015 (Exhibit 4). The cost to the federal government of subsidies in D.C. per person will increase next year as a result of the higher benchmark premium.  Households can switch plans during open enrollment, however, to find a lower-cost option.

In 2015 the average deductible for all plans in DC will be $3,162, with the silver plans averaging $1,950. Deductibles, out-of-pocket limits, and copayments all decreased from 2014 to 2015, with silver plan deductibles dropping by over 25 percent (Exhibit 3). 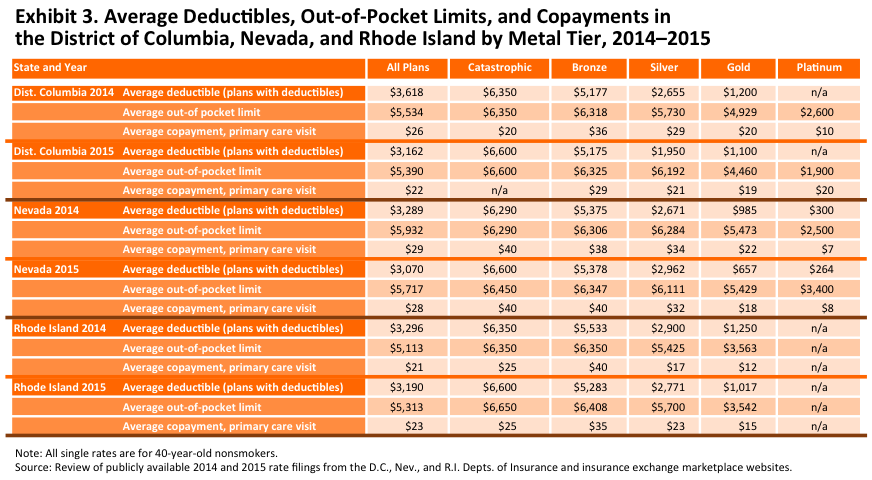 The average deductible in 2015 for all marketplace plans will be $3,070, with the silver plans averaging $2,962.  Deductibles and out-of-pocket limits on average decreased across the state, while the average copayment for primary care remained relatively unchanged (Exhibit 3).

Premiums were essentially unchanged in Rhode Island. For a 40-year-old non-smoker, the average monthly premium was $281 in 2014 and will be $280 in 2015.  For a family of four, the average premium declined from $845 in 2014 to $837 in 2015 (Exhibit 2). Based on 2014 plan enrollment, however, we estimate consumers enrolled in plans offered in both 2014 and 2015—who do not switch—would experience an average premium increase of 5 percent for single coverage (not shown).  Since this analysis makes the assumption that all consumers will remain in the same plans next year, and also cannot account for either new entrants in 2015 or plans exiting the market, we would expect this figure to decrease once 2015 enrollment data are available.

The benchmark plan premium decreased from $294 in 2014 to $260 in 2015–a substantial decrease of 12 percent. Because the 2015 benchmark plan is offered by a new carrier, enrollees qualifying for a subsidy may consider changing plans during open enrollment to avoid paying more for their premiums (Exhibit 4).

Although statewide average premiums differ among the three states profiled in this post–all displayed some explanatory factors in common.

Conversely, significant changes from year to year were seen in the catastrophic tiers in D.C. and Rhode Island (increases of 37 percent and 18 percent, respectively) and the platinum tier in Nevada (23 percent increase), which may suggest that enrollment or claims utilization in 2014 differed from projections.

Market entry and exit may play some role in the premium changes in these states, but it is comparatively minor. New carriers entered the marketplace in Nevada (Time Insurance Company, d/b/a Assurant) and Rhode Island (United Healthcare of New England), and no carriers exited the market in any of the three states. Among carriers participating in both years, Nevada Health CO-OP increased its number of plan offerings from 21 to 31, adding products to the silver, gold, and platinum tiers.

Data for this project are drawn from a variety of sources. For summaries of benefits and coverage, data in states running their marketplaces are from publicly available rate filings from state Departments of Insurance, marketplace, and/or carrier websites.  Readers may find a more complete description for study methods including weighting methods on an earlier posting at http://www.commonwealthfund.org/publications/blog/2014/oct/modest-premium-changes-ahead.

1 An additional tier, catastrophic plans, is available to enrollees under the age of 30 or those with certain qualifying life circumstances. These plans are included in our data set and in all subsequent calculations.

2 Out of four total rating areas in the state; for this series, three rating regions are sampled from all states with more than one.