Recently, the U.S. Department of Health and Human Services (HHS) reported a significant increase in the number of insurers expected to offer qualified health coverage through the Affordable Care Act’s (ACA) health insurance marketplaces in their second year of operation. The findings were based on preliminary data from all federally facilitated marketplaces and a selection of state-based marketplaces. Consistent with these observations, our analysis of updated participation data in from the state-based marketplaces in 16 states and the District of Columbia reveals that, compared with last year, consumers in 15 of these marketplaces will benefit from steady or increased insurer participation during this open enrollment season.

The ACA was designed to make quality health coverage more affordable and accessible, in part by promoting competition among insurers in the law’s new marketplaces. By providing consumers with a portal through which to compare plans and obtain financial assistance with the cost of coverage, policymakers hoped the marketplaces would attract a large customer pool. Insurers seeking a share of that business would have to compete for it, doing so—thanks to the added transparency and the law’s consumer protections—based on price and value.­

To further foster a competitive environment, state-based marketplaces made a number of critical policy decisions in the lead-up to the first open enrollment period intended to encourage insurers to participate in the marketplaces. In general, carriers saw value in marketplace participation (Exhibit 1). 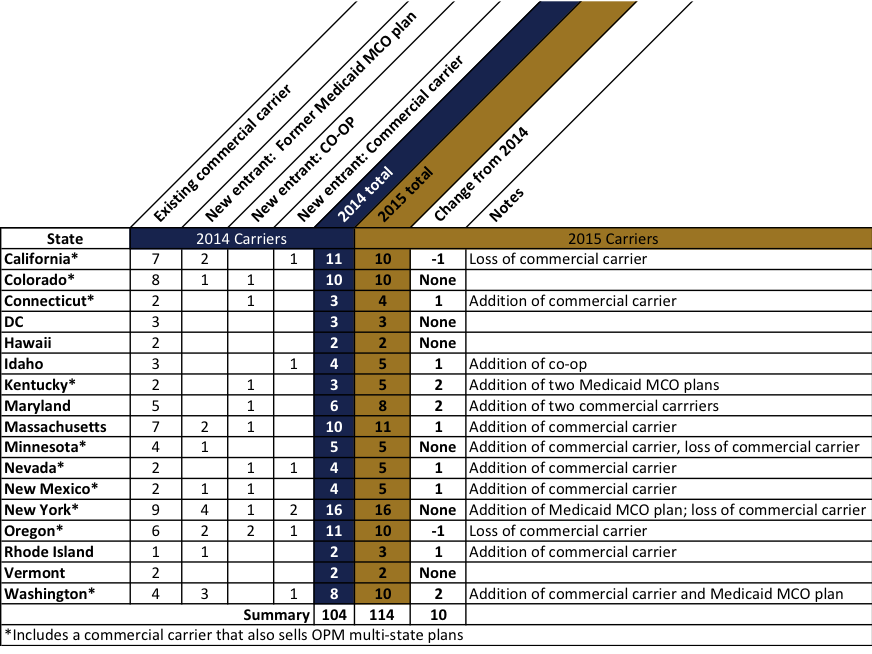 Compared with their individual market coverage options prior to reform, consumers in most states with their own marketplaces had a greater number of offerings to choose from in 2014, as more insurers entered these markets to sell plans though the new marketplaces. Some commercial insurers that sold group plans expanded into the individual market, and others entered the commercial market for the first time. For example, nine state-based marketplaces attracted plans that, prior to the ACA, had primarily participated in the Medicaid managed care organization (MCO) market. In New York alone, four such carriers participated in the marketplace in 2014. Meanwhile, 13 state-based marketplaces saw participation from ACA-created nonprofit consumer operated and oriented plans (CO-OPs) or from newly established commercial insurers.

Insurer Participation Increased or Remained Steady in Most States

Nine states have more insurers selling in their marketplaces than last year, while five states and the District of Columbia saw no net change. Only two states faced a decline in the number of participating insurers, in each case, by a single carrier.1

There is a net increase of 10 insurers competing to sell plans to consumers across all state-based marketplaces. Though the number of plans offered in each state marketplace varies widely, research suggests that increased competition among insurers yields better outcomes for consumers. According to HHS, increased competition—measured by the number of issuers in a rating area—is associated with more affordable benchmark plans. In addition, HHS found that areas with more issuer competition tend to offer consumers more plan types (such as PPOs, HMOPs, and CO-OPs) that provide consumers with more options.

The increases are likely to be especially significant in those states in which participation was comparatively limited last year. For example, Mountain Health CO-OP, an Idaho branch of the Montana Health CO-OP, joined Idaho’s four existing marketplace carriers in 2015. In Kentucky, two former Medicaid MCO plans are competing with the three insurers that participated in that state’s marketplace in 2014.

Meanwhile, United Healthcare, a national insurer that chose to sell in only a small number of states' individual markets in 2014, has expanded to marketplaces in Maryland, Connecticut, Rhode Island, and Massachusetts—all states where insurer participation was already comparatively high. Minnesota, by contrast, lost a major player in its 2014 marketplace, but gained a new entrant.2

At the same time, most states that are losing a marketplace carrier next year nonetheless maintained a relatively large and diverse mix of participants (and one, New York, replaced its departing insurer with a new entrant). California and Oregon both continue to have double-digit participation, and the exiting carriers had very small shares of the markets in these states.

The fact that carriers continue to participate in state-based marketplaces in numbers roughly equal to—and often greater than—their level of involvement in the first year suggests industry participants view the marketplace model as viable. This means consumers will continue to have the opportunity to choose among an array of plans competing to offer them value. In these states—and particularly in those that acted to make it easier for consumers to understand and navigate their options—there is reason to anticipate that this competition can help moderate premiums and increase consumers’ access to affordable coverage.

1 Though the New Mexico Health Insurance Exchange originally had five carriers selling in the individual market during the first year of open enrollment, in November of 2013 Blue Cross Blue Shield of New Mexico announced plans to acquire Loveless Health Plan, prompting the New Mexico Superintendent of Insurance to urge consumers not to purchase Lovelace Health Plan Insurance Policies. As such, we consider New Mexico to functionally have four carriers selling individual coverage through the marketplace in 2014.

2 Blue Plus will join MNsure in 2015. The company is a subsidiary of Blue Cross Blue Shield of Minnesota, which also sells plans through the marketplace.