Latinos Have Made Coverage Gains but Millions Are Still Uninsured

Since the Affordable Care Act’s health insurance marketplaces opened and states began to expand Medicaid eligibility, uninsured rates among Latinos have begun to decline for the first time in decades (Exhibit 1). Studies of the effects of health insurance suggest that these higher coverage rates will contribute to better access to care, increased use of preventive services, better management of chronic illness and, eventually, longer and healthier lives for many Latinos.1

Despite these historic declines in the number of uninsured, the Commonwealth Fund Biennial Health Insurance Survey finds Latinos continue to have the highest uninsured rates among major U.S. racial or ethnic groups. One reason is that Latinos make up a disproportionate share of unauthorized immigrants who are ineligible for Medicaid or participation in state and federal marketplaces. Still, the vast majority of Latinos are U.S.-born or legal immigrants2 who are entitled to the full benefits of the health reform law.3 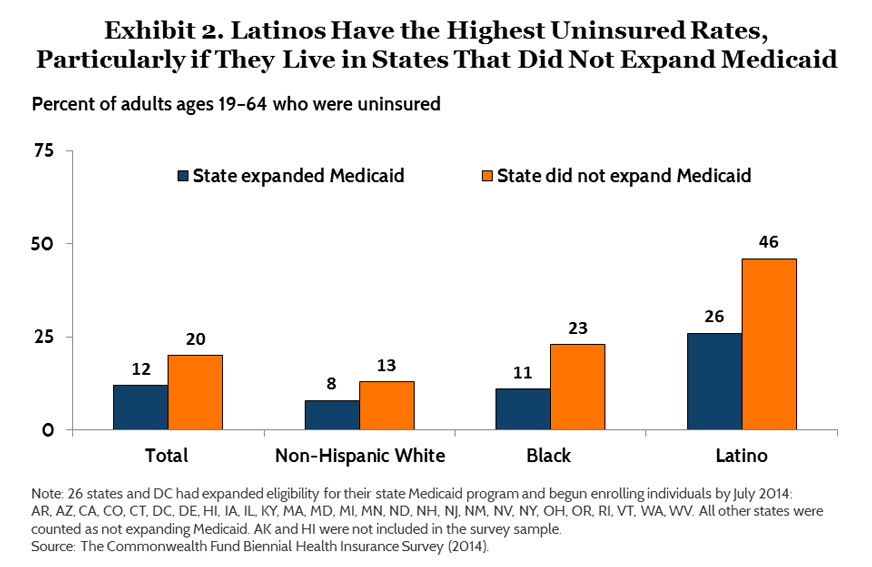 Many Latinos continue to struggle to get affordable care. Latinos are more likely than non-Hispanic whites to forgo needed health care because of cost. However, Latinos who were insured all year experienced fewer problems accessing care because of cost and fewer problems paying medical bills or paying off their medical debt than Latinos who were uninsured during the year (Exhibit 3). 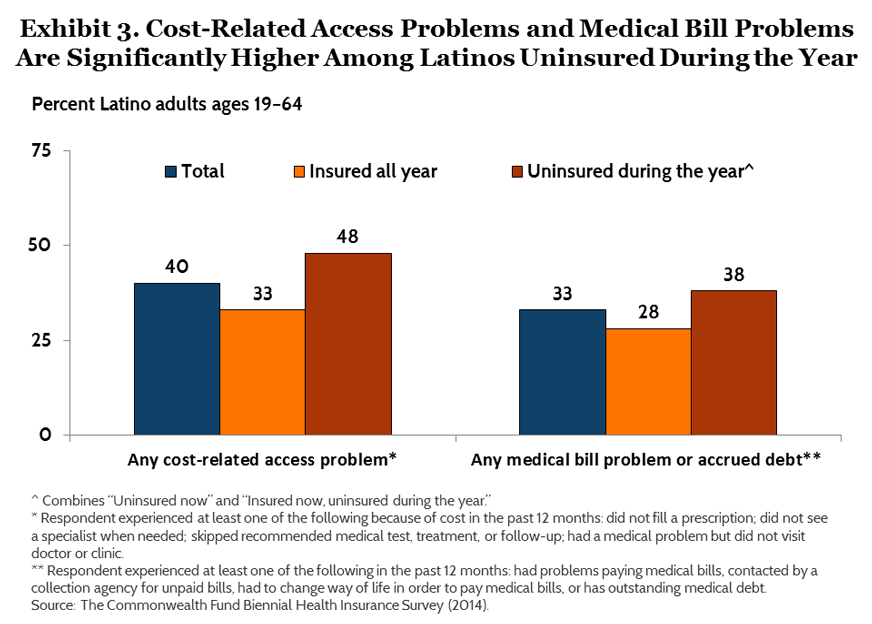 The majority of Latino adults who remain uninsured is young, low-income, and employed. Half of uninsured Latinos have incomes below 133 percent of poverty, or about $15,300 a year for an individual, which makes them eligible for Medicaid coverage in states that have expanded eligibility for the program (Exhibit 4). However, 51 percent of these low-income uninsured Latinos live in states that had not expanded their Medicaid program by July 2014 (data not shown). 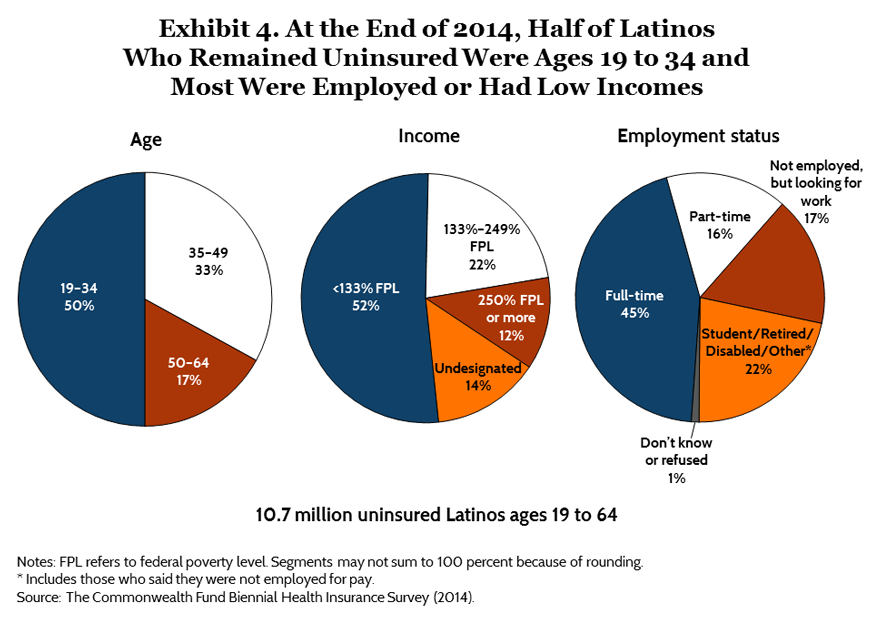 Language barriers continue to be an important consideration for improving coverage among Latinos. Three-quarters of Latinos who are still uninsured predominately speak Spanish, and almost all (79%) of these individuals say they understand or speak English “just a little” or “not at all” (Table 1).

Table 1. Characteristics of Latinos Who Remained Uninsured
at the End of 2014

California—home to 14 million Latinos—provides a road map of what states can do to improve insurance coverage among Latinos. First, California historically has had generous eligibility levels for Medicaid coverage, and chose, under the health reform law, to further expand Medicaid eligibility. Second, it does not require a five-year waiting period for legal immigrants to be eligible for coverage. And third, California is investing significantly in outreach to Spanish-speaking residents. According to a Kaiser Family Foundation study, about half of all previously uninsured Latinos in California gained coverage during the first year of open enrollment.5

Reaching remaining uninsured Latinos who are eligible for coverage and improving their access to care will depend on states’ decisions to expand Medicaid eligibility levels and ongoing innovation in public and private outreach efforts. The upcoming Supreme Court decision on the legality of marketplace subsidies also will determine whether Latinos can continue to afford health insurance in the 34 states that do not run their own marketplaces. 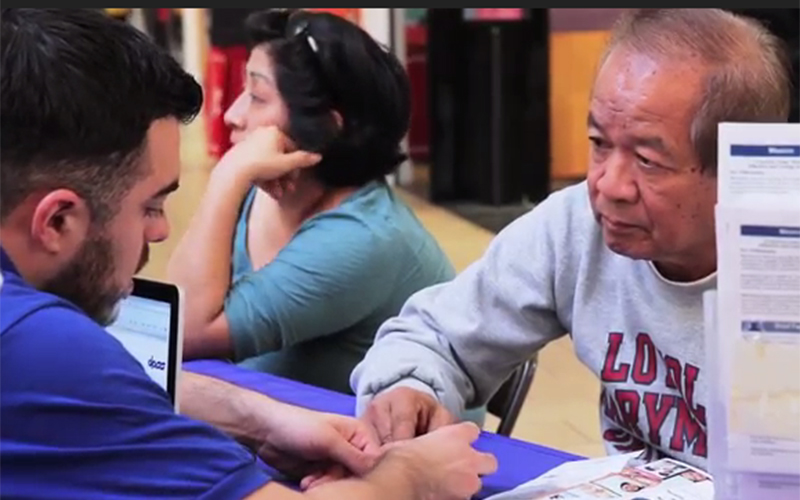 1 D. Blumenthal and S. R. Collins, “The Effects of Health Insurance on Health: What We Can Expect from the Affordable Care Act,” The Commonwealth Fund Blog, June 21, 2013.
2 J. M. Krogstad and M. H. Lopez, “Hispanic Nativity Shift,” Pew Research Center, April 2014, http://www.pewhispanic.org/2014/04/29/hispanic-nativity-shift/.
3 The health reform law offers an important new opportunity for people legally present in the United States who previously had to wait five years to gain access to affordable health insurance. Legal immigrants are now eligible for Medicaid or subsidized private coverage depending on what state they live in and how long they have been residing in the United States. In states that are expanding Medicaid, legal immigrants who have been in the United States for five years or more and have incomes below 138 percent of poverty are eligible to enroll in Medicaid. And those immigrants who have the same income or lower but have lived in the U.S. for less than five years can buy subsidized coverage through the marketplace if they do not have affordable coverage through an employer. In states that do not expand their Medicaid programs, people with incomes between 100 percent and 400 percent of poverty are only eligible for subsidized private coverage; lawfully residing immigrants with income under 100 percent of poverty are also eligible for subsidized private coverage in the marketplaces while U.S. citizens are not.
4 E. R. Gee, Eligible Uninsured Latinos: 8 in 10 Could Receive Health Insurance Marketplace Tax Credits, Medicaid, or CHIP, ASPE Research Brief (Washington, D.C.: ASPE, Feb. 2014), http://aspe.hhs.gov/health/reports/2013/UninsuredLatinos/rb_uninsuredLatinos.pdf.
5 B. DiJulio, J. Firth, L. Levitt et al., Where Are California’s Uninsured Now? Wave 2 of the Kaiser Family Foundation California Longitudinal Panel Survey (Menlo Park, Calif.: Henry J. Kaiser Family Foundation, July 2014), http://kff.org/health-reform/report/where-are-californias-uninsured-now-wave-2-of-the-kaiser-family-foundation-california-longitudinal-panel-survey/.