Six-year-old Joshua Gallegos and his mother Aretta Gallegos sit outside their home in Northglenn, Colo., on Apr. 28, 2022. Aretta’s daughter, Brianna Mullins, was one of 105,000 overdose deaths in the United States in 2021. Photo: R.J. Sangosti/MediaNews Group/Denver Post via Getty Images

Drug overdose deaths in the United States spiked during the COVID-19 pandemic; recent estimates from the Centers for Disease Control and Prevention indicate that more than 105,000 lives were lost in 2021. This level of preventable mortality stands in stark contrast to international peer countries and is contributing to an unprecedented decline in U.S. life expectancy.

In this post we compare the U.S. to other high-income countries in drug overdose deaths and then highlight differences in behavioral health care, drug policies, and social services, and look at recent U.S. initiatives.

Overdose/Drug-Related Deaths Are Highest in the United States, Followed Closely by Scotland

Data released during the past year showed a dramatic increase in U.S. drug overdose deaths after COVID-19 emerged, with nearly 92,000 lives lost in 2020. Provisional data indicate that more than 105,000 lives were lost in 2021. Researchers have pointed to factors such as social isolation, addiction treatment interruption, and stronger synthetic opioids like fentanyl.

Many other countries also reported upticks in overdose deaths during 2020. While Canada stood out with a 77 percent increase in opioid-related deaths, rates for Germany and Norway started from a much lower level and increased by a lower percentage than the United States did. (See the appendix for 2019–2020 changes and differences in mortality data between countries.) 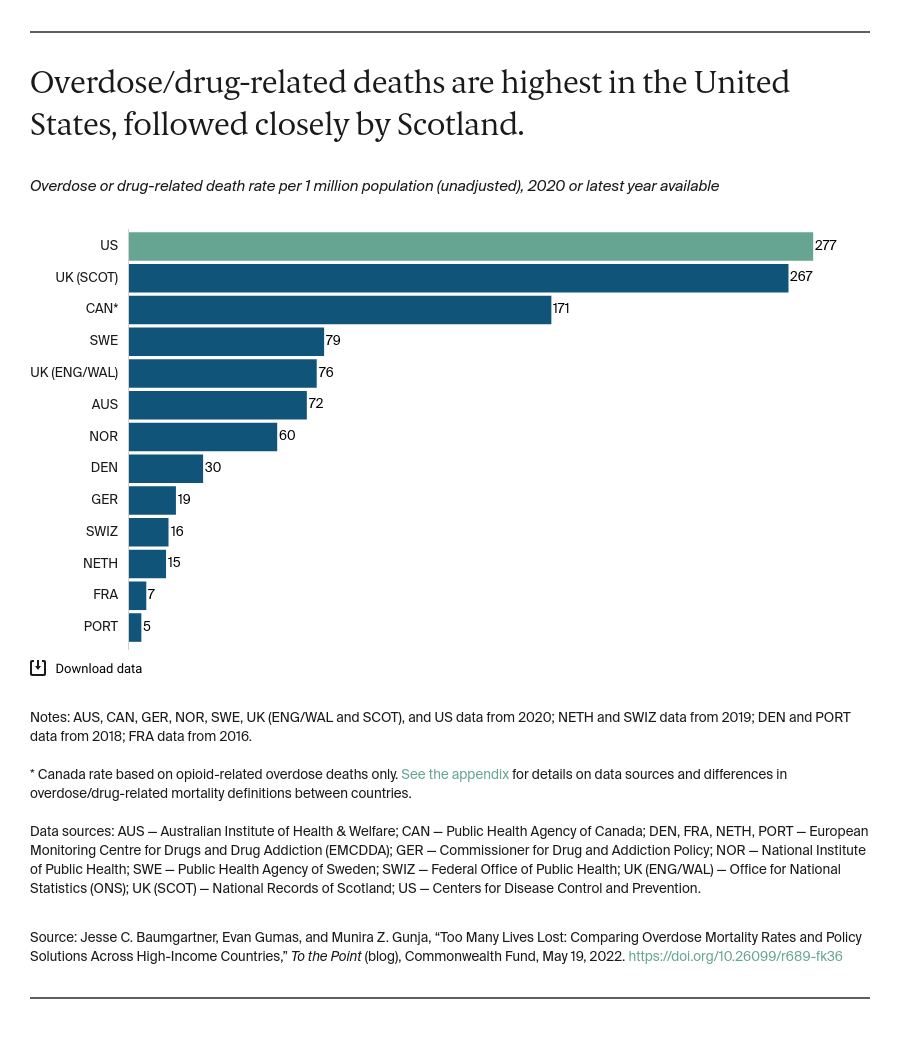 There are clear policy differences between the U.S. and the many peer countries with fewer overdose deaths:

The United States criminalizes drug use and incarcerates people at a much higher rate than peer countries, with disproportionate impact on people of color. Enforcement has not led to fewer overdose deaths, and criminalization has contributed to stigma and hesitance for patients seeking treatment. Although many incarcerated people have a drug use disorder, they often cannot access treatment in the justice system.

Other countries have implemented policies which focus on helping, rather than punishing, people struggling with addiction. Portugal, a country with much lower overdose mortality, decriminalized the personal use of illicit drugs and instead uses local commissions that include health care professionals to assess an individual’s need for treatment. In England, which has an overdose mortality rate well below that of the U.S., the government previously instituted an arrest referral program that helps people access treatment.

Americans who could benefit from drug treatment usually do not receive it. Data show that in many peer countries, 50 percent or more of adults with high-risk opioid use are receiving medications like methadone that reduce the risk of overdose. In contrast, only 11 percent of Americans with opioid use disorder reported receiving these treatments in 2020. 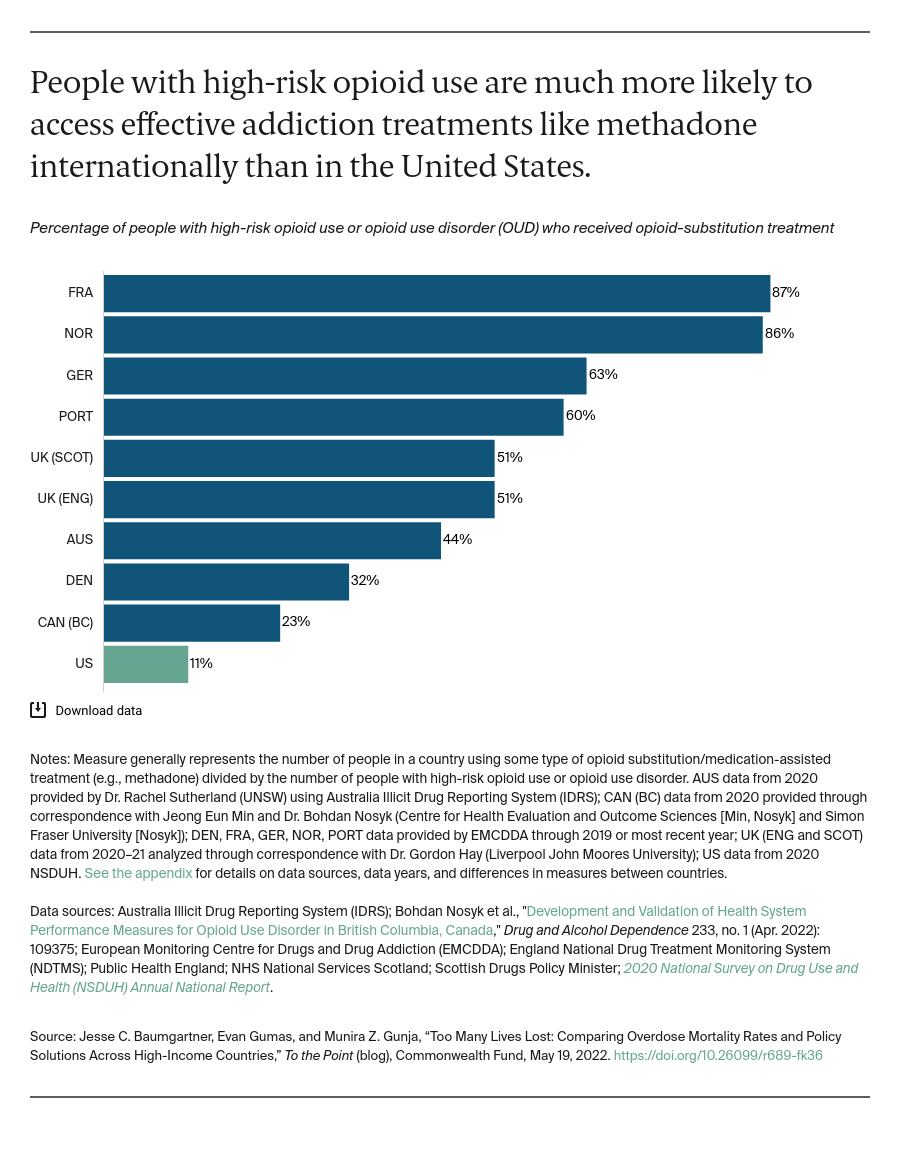 In the U.S, strict federal regulatory guidelines limit which providers can prescribe and administer treatments and where they can do so. In comparison, countries like France and the U.K. have made it easier for primary care doctors to give their patients medications like methadone and buprenorphine.

Nearly half of Americans living with a substance use disorder also report mental illness, but are often less able to access mental health care compared with international peers. These difficulties are compounded by limited U.S. mental health workforce capacity, one of the lower among high-income countries. Countries with better access and capacity, like the Netherlands, have taken approaches that prioritize mental health within primary care and use harm-reduction and drug-treatment programs as a foundation for connecting patients to mental and general health practitioners.

Overdose death risk has been associated with socioeconomic factors such as employment, housing, income, disability, and education. Compared to its OECD peers with lower drug-related mortality, the U.S. spends less on social services — like childcare and employment assistance — that support younger, working-age populations. Expanding social spending could improve outcomes by addressing socioeconomic burdens associated with substance use disorder and mortality.

U.S. overdose deaths have reached crisis levels. Lower mortality rates in other countries indicate we can learn from their experiences and strategies.

Encouragingly, recent domestic initiatives take aim at several of the gaps we identified. These include commitments by the Biden administration to expand the behavioral health workforce, improve addiction treatment access by relaxing federal restrictions around the use of telehealth and take-home medication, and invest in harm reduction.

Exhibit 1 (overdose mortality) and Exhibit 2 (opioid substitution therapy coverage) use data from a wide range of U.S. and international sources. These data sources and metrics can have important differences in methodology, indicator definition, and population measured, and the findings are not necessarily comparable in all instances.

For example, the definition of drug overdose deaths reported in the United States does not match up directly with the definition of “drug-induced deaths” collected in some European countries by the European Monitoring Centre for Drugs and Drug Addiction (EMCDDA). Or in the case of Canada, only opioid-related mortality statistics for 2020 are included. Overdose mortality rates presented are also unadjusted for population age differences, though using the ages 15–64 population in each country as the denominator results in a nearly identical rank order (see the appendix).

In the appendix, we have detailed and documented sources and definitions for each of the data points used in both exhibits, including potential limitations that should be considered when comparing countries.