Researchers surveyed low-income adults in three states—Arkansas, Kentucky, and Texas—that are taking varying approaches to expanding Medicaid eligibility. Nearly 80 percent of respondents favored Medicaid expansion, and most felt Medicaid was equal to or better than private coverage in overall quality. Approximately two-thirds of uninsured adults said they planned to apply for either Medicaid or subsidized private coverage in 2014. However, overall knowledge about states’ plans under the Affordable Care Act was low. The survey results were published online Oct. 8 in Health Affairs.

The Affordable Care Act called for a dramatic expansion of Medicaid, with coverage for an additional 16 million low-income Americans initially anticipated. However, the Supreme Court ruled in June 2012 that this expansion was optional for states. Currently, 27 states and the District of Columbia have chosen to expand Medicaid. Most of the other states have rejected expansion, while several are still deliberating, including a few that are considering using federal money to let people with low incomes purchase private insurance. Politicians, researchers, and academics have weighed in on this issue, but little is known about the views of those individuals who would stand to benefit from broader Medicaid eligibility. Commonwealth Fund–supported researchers surveyed low-income adults, ages 19 to 64, in three states that are taking varying approaches to the issue: Kentucky, which has expanded Medicaid; Arkansas, which is using Medicaid dollars to purchase private health insurance; and Texas, which has rejected any kind of expansion. 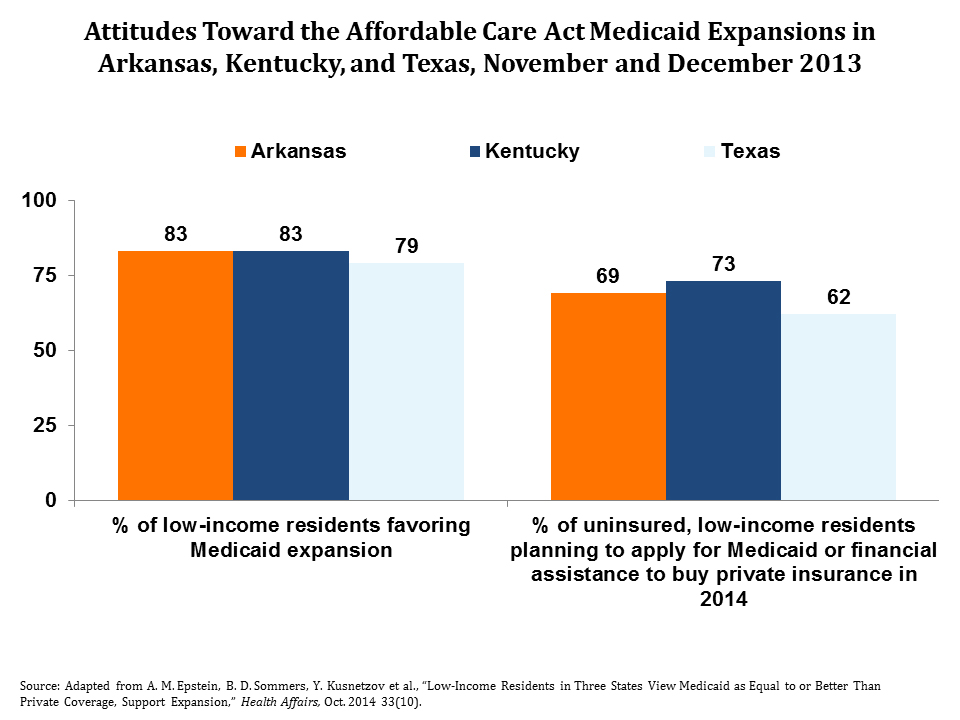 "While the debate over Medicaid expansion continues, support for expansion is strong among low-income adults, and the perceived quality of Medicaid coverage is high."

The study collected information on survey respondents’ health status, which suggests that low-income populations may gain substantially from access to medical services. Thirty-two percent to 40 percent of respondents said they were in fair or poor health, and 52 percent to 71 percent reported having at least one of nine chronic conditions. “Thus,” the researchers conclude, “the Medicaid expansion adopted under the ACA appears to be well targeted.”

The survey included U.S. citizens ages 19 to 64 living in Arkansas, Kentucky, or Texas and having a household income below 138 percent of the federal poverty level. Interviews were conducted in November and December 2013. The final sample included nearly 3,000 people.

Nearly 80 percent of low-income adults in Arkansas, Kentucky, and Texas favored Medicaid expansion, with about two-thirds of uninsured adults planning to apply for either Medicaid or subsidized private coverage in 2014. Many respondents had health conditions or poor health status, suggesting that the population may benefit greatly from enhanced access to health care. The perceived quality of Medicaid coverage was high.

The Pandemic Won’t End Until We Strengthen Our Safety Net