At a recent concert in Clearwater, Florida, Jodi Ray was proud to recognize the lead singer — a previously uninsured man in his forties, whom she helped get health coverage. Ray, who directs a navigator program that helps individuals enroll in health insurance in Florida, guided him through the process of buying a plan through the Affordable Care Act’s (ACA) health insurance marketplace.

“He told me that he couldn’t even remember the last time he went to a doctor, ever,” she said. “The next time I saw him, he was playing with his band. He was so excited, he came up to me and said, ‘Guess what? I went and had a physical.’” 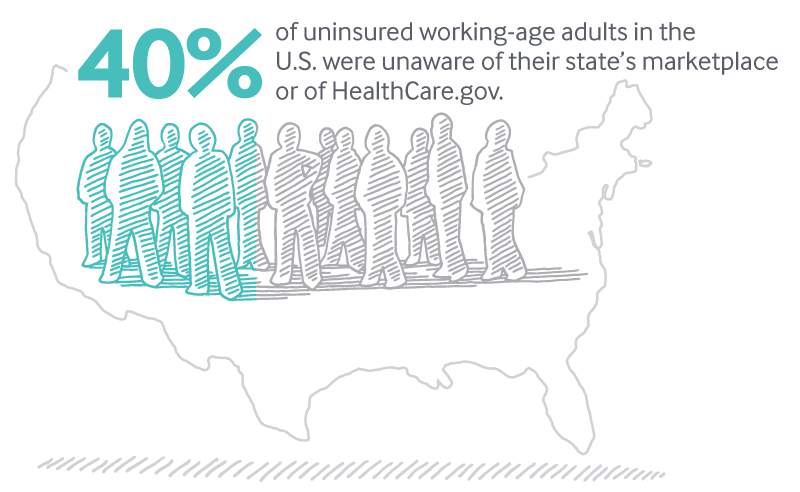 Navigators like Ray play a key role in getting information to those who don’t know about their coverage options. A recent Commonwealth Fund ACA tracking survey found that two of five (40%) of America’s 27.5 million uninsured working-age adults were not aware of their state’s marketplace or of HealthCare.gov, the federal website for people seeking health insurance.

As 2017’s open enrollment period (beginning on November 1) approaches, navigators like Ray are at risk of not being able to do their job — helping enroll some of America’s most vulnerable populations, including low-income people in remote areas, racial and ethnic minorities, immigrants who don’t speak English, and formerly incarcerated individuals.

The Trump administration announced in August that it will cut the federal ACA advertising budget from $100 million in 2017 to $10 million in 2018, and reduce support for the navigator program, from $62.5 million to $37 million. Grants ran out for navigators on September 1, and they were asked to submit new budgets to the Centers for Medicare and Medicaid Services, but it’s unclear if or when these funding requests will be approved. The uncertainty around funding is effectively pausing the navigator program — organizations are halting operations and laying off staff.

The decision to gut outreach efforts is likely to destabilize the individual marketplaces when they open on November 1 for 45 days (half of last year’s 90-day enrollment period, and with closures nearly every Sunday). To counter the widespread uncertainty and misinformation about open enrollment under the Trump administration, a group of former health officials in the Obama administration on October 4 launched a project to provide guidance on coverage called Get America Covered. “Getting accurate information out is exceptionally important now, knowing that we have this shortened open enrollment period and a lot of people can be caught off guard,” Ray said. 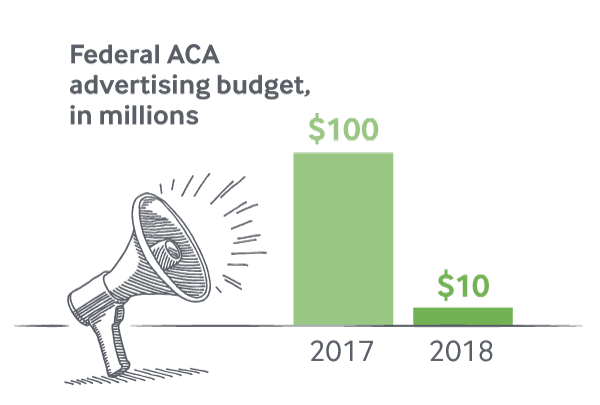 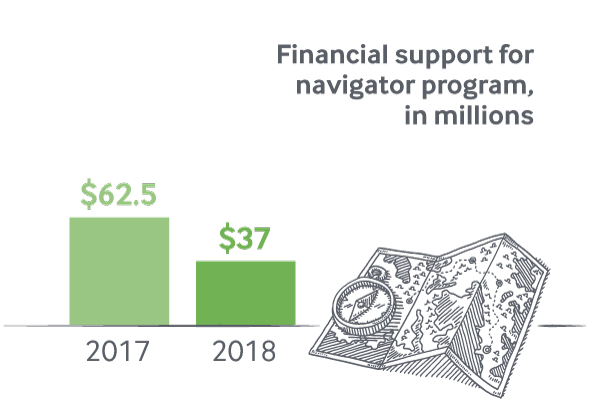 The Commonwealth Fund has found that better information about choices and costs has a positive impact on enrollment, particularly among people who are eligible for subsidies. Results from the tracking survey revealed two-thirds (66%) of adults who received personal assistance when they shopped for coverage enrolled, compared to fewer than half (48%) who had not received assistance.

State experiences offer some additional insight into the impact of education and assistance. Analysis of 2017 marketplace enrollment trends by Georgetown University researchers found that state-based efforts to bolster outreach and enrollment — such as bigger investments in advertising or extending the enrollment signup period — likely increased enrollment. Conversely, states such as Texas that restricted outreach saw lower enrollment. Harvard researchers who examined state policies in Arkansas, Kentucky, and Texas found navigator programs improved the enrollment success rate of applicants by about 8 percentage points (from 85% to 93%).

Despite this evidence, not only has the total funding for navigator grants been reduced, but if grantees receive funding at all, it will be based on their ability to meet their enrollment goals during the previous year. For example, if a navigator meets 50 percent of its enrollment target in 2017, it will receive half its grant funding in 2018.

It isn’t clear whether or not enrolling someone in Medicaid or the Children’s Health Insurance Program counts towards these performance goals, even though navigators are expected to assist anyone in need of coverage regardless of program eligibility. This makes the goal of meeting targets doubly harmful to the poor — if enrolling them in Medicaid doesn’t count, navigators may be forced to focus on enrolling those with higher incomes, who will buy insurance on the marketplaces.

The fear is that if the metric is how many people you enrolled, that’ll lead to incentives to sign up as many of the easy to enroll as you can and not spend the time on the hard to reach.

“The fear is that if the metric is how many people you enrolled, that’ll lead to incentives to sign up as many of the easy to enroll as you can and not spend the time on the hard to reach,” explains JoAnn Volk, a senior research fellow at the Georgetown University Center on Health Insurance Reforms. “You can’t match up funding with enrollment levels, because there are many reasons people don’t enroll in the marketplace — affordability, eligibility for Medicaid, complicated immigration status.”

Those who are hard to reach are most at risk of lacking coverage: as the Commonwealth Fund’s survey found, those with low incomes, and racial and ethnic minorities, are most likely to lack coverage, in part because they may be unaware of the marketplaces.

New York, which has a well-developed navigator program, associates an increase in the insurance rate among racial and ethnic minorities with the benefits of increased awareness that the navigator program has been able to generate, according to Elisabeth Benjamin, vice president of Health Initiatives at the Community Service Society of New York, a nonprofit.

Vulnerable communities, who have a higher need for preventive care, “because the social determinants of health drive higher rates of diabetes, heart disease, and asthma, are also much harder to reach and require more effort,” Benjamin said. But they are the ones who get left out when resources are depleted. “Not all enrollments are created equal.” 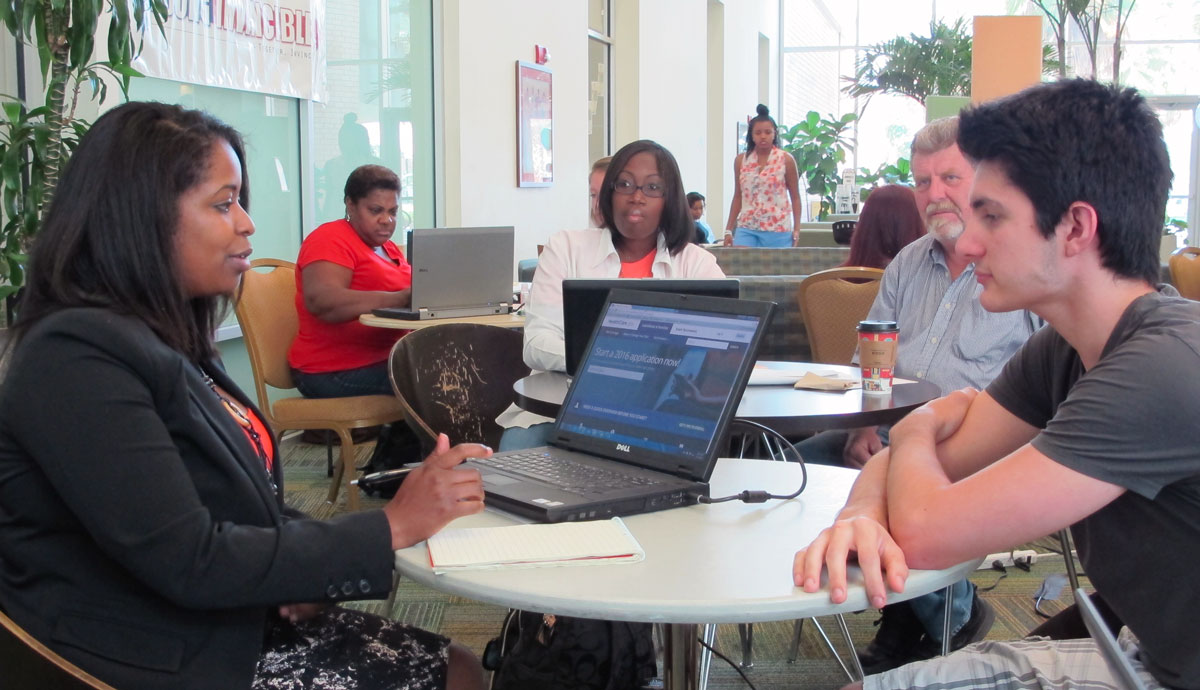 A navigator guides an individual through the enrollment process during an enrollment event at the University of South Florida. Photo courtesy of Florida Covering Kids & Families.

New York State’s navigator program, which is state-funded, has been successful in part because navigators have good coverage options to offer: the state has both expanded Medicaid eligibility and made available the ACA’s Basic Health Plan. Nearly 700,000 New Yorkers have enrolled in this plan, which offers quality coverage without deductibles, for free or for $20 per month.

New York has also invested in other outreach efforts, in particular, advertising and media campaigns.

Other states have found that strategic marketing and outreach are vital investments to increase not just enrollment, but also continued coverage. “The marketing piece is key for making sure healthy people stay covered,” said Peter Lee, executive director of Covered California, the state’s health insurance marketplace.

Marketing pays for itself several times over. Our modeling shows that marketing is vital and critical, and cutting it leads to a far worse risk mix.

California, like New York, no longer relies on the federal government to fund its marketing and outreach efforts. But in states that aren’t able to invest on their own, federal money for outreach can go a long way for enrollment.

The marketplaces open in less than one month for 2018 enrollment, at a time of uncertainty and turbulence. At greatest risk are those who lack coverage, or who may allow their coverage to lapse, including people with low incomes and minorities. “Cutting funds for outreach at a time when there is shortened open enrollment creates more and more barriers to reaching the remaining uninsured, and those at risk of losing coverage,” Volk said.