Methodology: The 2009 Commonwealth Fund National Survey of Federally Qualified Health Centers was conducted by Harris Interactive, Inc., from March 2, 2009, though May 27, 2009, among 795 executive directors or clinical directors at federally qualified heath centers (FQHCs). The survey consisted of an eight-page questionnaire that took approximately 20 to 25 minutes to complete; a $100 incentive for the health center was included in the original mailing. The sample was drawn from a list provided by the Bureau of Primary Health Care (BPHC) of all FQHC grantees that have at least one site that is a community-based primary care clinic. A total of 1,007 FQHCs were sent the questionnaire and 795 responded, yielding a response rate of 79 percent. The data were weighted by the number of patients, number of sites, region, and urbanicity in order to more accurately reflect the universe of primary care community health centers. 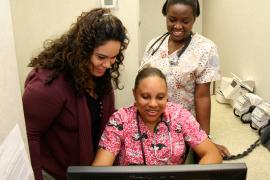 The Adoption and Use of Health Information Technology by Community Health Centers, 2009–2013