Methodology: The 2013 Commonwealth Fund Survey of Federally Qualified Health Centers was conducted by Social Science Research Solutions from June 19, 2013, through October 24, 2013, among a nationally representative sample of 679 executive directors or clinical directors at federally qualified health centers (FQHCs). The survey sample was drawn from a list of all FQHCs in 2011 that have at least one site that is a community-based primary care clinic.  The list was provided by the federal Bureau of Primary Health Care. All 1,128 FQHCs were sent the questionnaire and 679 responded, yielding a response rate of 60 percent. The survey consisted of a 12-page questionnaire that took approximately 20 to 25 minutes to complete. Data were weighted by number of patients, number of sites, geographic region, and urban/rural location to reflect the universe of primary care community centers as accurately as possible.

Use of electronic health records increased 133 percent in federally qualified health centers (FQHCs) between 2009 and 2013, according to a new Commonwealth Fund survey of health center leaders. Spurred by federal investments and financial incentives to more fully embrace health information technology (HIT), 85 percent of FQHCs reported they had achieved advanced HIT capabilities in 2013—meaning they could perform at least nine of 13 key functions, such as electronically prescribing medications. The rate in 2009 was just 30 percent. In fact, FQHCs adopted HIT at higher rates than office-based physicians, including large practices and large integrated health care systems. 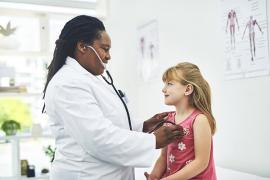