Black and Latino/Hispanic people, along with American Indian/Alaska Native (AIAN) people, are much less likely than white people to have health insurance. Evidence shows that expanding coverage is not only essential for facilitating equitable access to health care, but also is associated with improved mortality outcomes, poverty reductions, and protection from debilitating financial bills.

With the Build Back Better Act (BBBA) now stalled in the U.S. Senate, further progress in reducing disparities is at risk. In this post we focus on three policies that would promote a stronger and more equitable health insurance system: ensuring continuous postpartum coverage in Medicaid for low-income people, providing coverage to people in the Medicaid expansion gap, and extending the increase in marketplace premium subsidies established under the American Rescue Plan Act (ARPA).

Enacting these coverage expansions has the potential to narrow gaps in health care access and improve economic disparities by making coverage and health care more affordable.

Black and Indigenous people are much more likely to experience pregnancy-related deaths and morbidity. Medicaid covers 65 percent of Black births; state programs are required to provide only 60 days of postpartum coverage.

Expanding postpartum Medicaid coverage to a full year, as some states have done already, can help improve coverage continuity and reduce maternal health disparities by increasing access to preventive and acute care. ARPA provided states with an option to extend to 12 months; the BBBA would make it a requirement.

Extending Coverage to People in the Medicaid Coverage Gap

But in 2012, the Supreme Court made Medicaid expansion optional for states; 12 states have yet to expand. This has created a “coverage gap” for poor adults who have incomes above their state Medicaid eligibility line (which is very low in nearly all of the remaining 12 states), but still below the poverty level, making them unable to qualify for subsidized marketplace plans.

An estimated 5.8 million uninsured adults in these 12 states have incomes below the poverty level. People in the gap are disproportionately people of color, largely Black and Latino/Hispanic. Many reside in Florida, Georgia, North Carolina, and Texas.

Black and Latino/Hispanic adults living in Medicaid expansion states have had greater coverage gains and a larger reduction in disparities than those living in nonexpansion states since expansions first took effect in 2014. The BBBA would fill the coverage gap by allowing eligible adults without access to Medicaid in their states to receive free coverage sold by private insurance companies in the ACA marketplaces. This insurance would have very low cost sharing and would eventually cover additional services found in Medicaid, including nonemergency medical transportation. 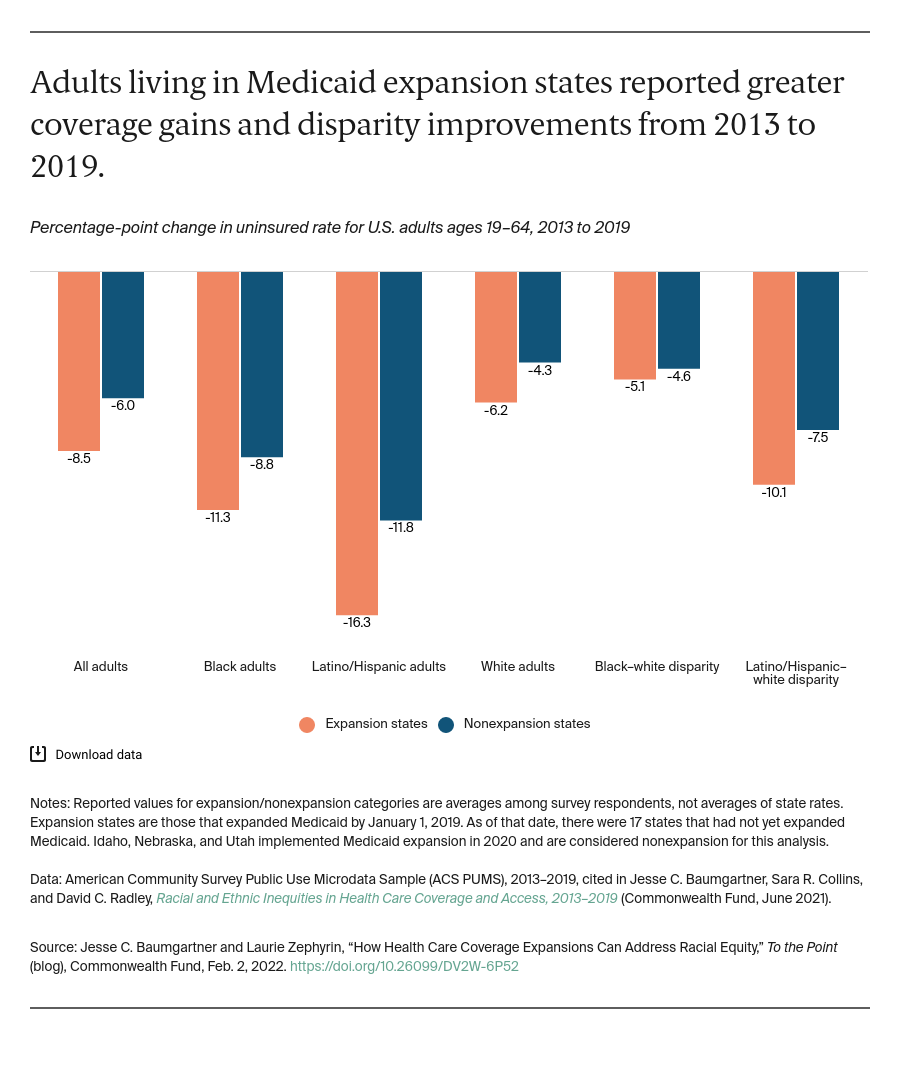 The ACA made individual health insurance significantly more affordable by subsidizing the purchase of plans in the ACA exchanges for people with incomes between 100 percent and 400 percent of the federal poverty level ($12,880 to $51,520 for an individual and $26,500 to $106,000 for a family of four who purchased a plan for 2022). Thanks in part to this reform, coverage disparities have improved even in Medicaid nonexpansion states.

During the special marketplace enrollment period in 2021, when ARPA’s subsidy enhancements first went into effect, the U.S. Department of Health and Human Services reported that a higher percentage of enrollees identified as Black or Latino/Hispanic as compared to prior years.

Estimates produced by the Urban Institute for the Commonwealth Fund show that the combination of closing the coverage gap and maintaining ARPA’s enhanced marketplace premium subsidies would reduce the number of uninsured nonelderly people by about 7 million (down to 23.3 million), including 4.3 million newly insured within the 12 nonexpansion states.

This would improve racial equity. Nearly half of those gaining coverage would be people of color, including 1.2 million Black Americans, 1.7 million Latino/Hispanic Americans, and 140,000 Native Americans. 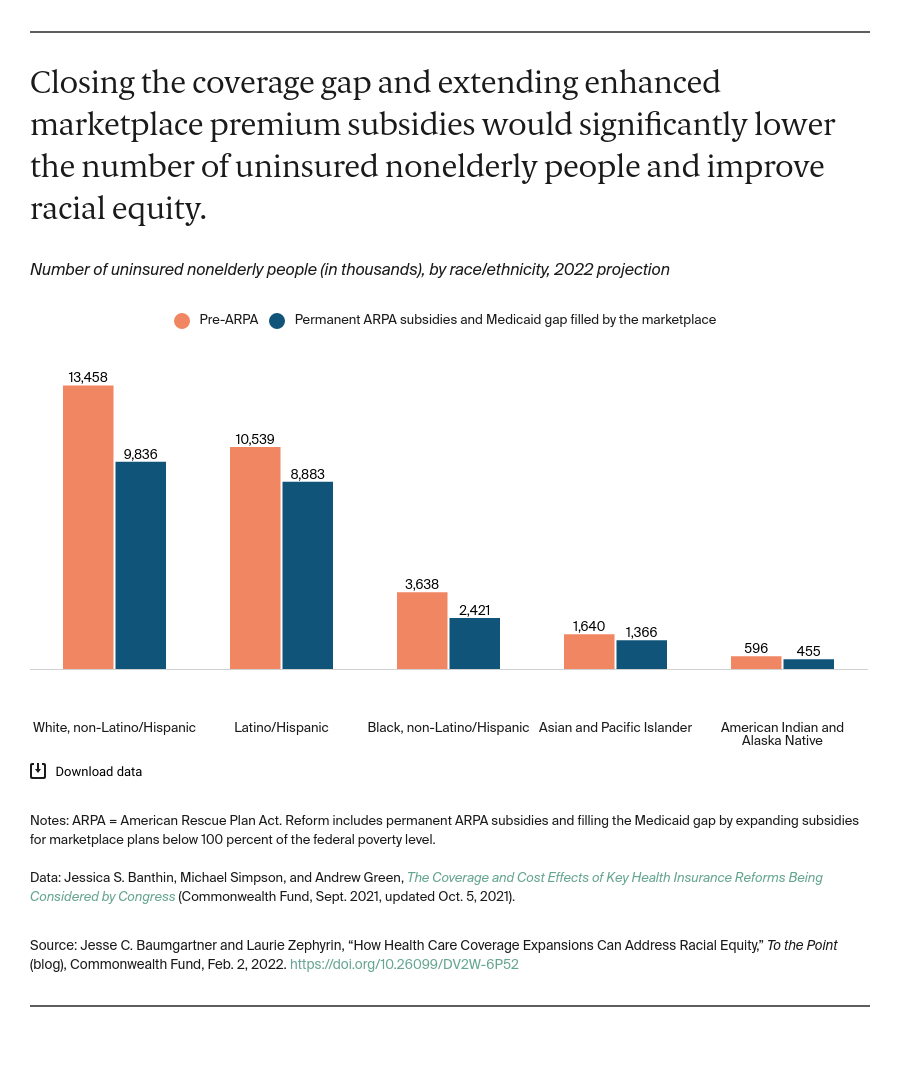 Research shows that coverage gains like these, particularly via Medicaid expansions, are associated with increased and more equitable health system access and a wide range of improved economic and health outcomes. Those include reductions in overall mortality, lower maternal mortality disparities, a reduction in poverty, and lower medical debt. These are some of the same indicators where we continue to see wide inequities for many people of color, particularly Black and Indigenous people.

Lawmakers have an opportunity to build on the ACA’s initial success and create a stronger, more equitable health system. Failure to do so would leave millions of Americans at risk and perpetuate current disparities.

What Policymakers Can Do to Address Our Behavioral Health Crisis