Americans' Experiences with ACA Marketplace and Medicaid Coverage: Access to Care and Satisfaction

The fourth wave of the Commonwealth Fund Affordable Care Act Tracking Survey, February–April 2016, finds at the close of the third open enrollment period that the working-age adult uninsured rate stands at 12.7 percent, statistically unchanged from 2015 but significantly lower than 2014 and 2013. Uninsured rates in the past three years have fallen most steeply for low-income adults though remain higher compared to wealthier adults. ACA marketplace and Medicaid coverage is helping to end long bouts without insurance, bridge gaps when employer insurance is lost, and improve access to health care. Sixty-one percent of enrollees who had used their insurance to get care said they would not have been able to afford or access it prior to enrolling. Doctor availability and appointment wait times are similar to those reported by insured Americans overall. Majorities with marketplace or Medicaid coverage continue to be satisfied with their insurance.

Three years after the Affordable Care Act’s major health insurance expansions went into effect, nearly 28 million people are estimated to have coverage either through the marketplaces or through Medicaid.1 Yet there remains considerable controversy over how well these reforms are working for Americans.

The fourth Commonwealth Fund Affordable Care Act (ACA)Tracking Survey interviewed a nationally representative sample of 4,802 working-age adults, of whom 881 have new marketplace or Medicaid coverage under the health reform law, to find out how their insurance is affecting their lives (Table 1). The survey firm SSRS conducted the interviews between February 2 and April 5, 2016. In this issue brief, we examine the law’s effects on insurance coverage and how people are using their coverage to get health care. Upcoming briefs in this series will discuss the survey’s findings on affordability and choice, as well as the reasons why millions of people remain uninsured.

The survey found that the percentage of adults who were uninsured as of February–April 2016 is significantly below 2013 and 2014 levels, though coverage gains were smaller. The uninsured rate for adults ages 19 to 64 was 12.7 percent in February–April 2016, compared with 13.3 percent in March–May 2015, 14.8 percent in April–June 2014, and 19.9 percent in July–September 2013 (Exhibit 1). The 2016 rate is not statistically different from the 2015 rate.2 This represents an estimated decline of 13 million uninsured adults since the law’s major coverage reforms have taken effect. in 2013. These changes are within the range of estimates reported by other recent surveys (see Appendix).

People with low and moderate incomes—the population targeted in particular by the ACA’s reforms—had the highest uninsured rates prior to the law’s enactment and subsequently have experienced the greatest gains in coverage by far (Exhibit 2). But after declining steeply in 2014, uninsured rates for adults with incomes below 138 percent of the federal poverty level ($16,243 for an individual and $33,465 for a family of four) have remained about the same. Similarly, uninsured rates for those with incomes between 138 percent and 249 percent of poverty ($29,425 for an individual and $60,625 for a family of four) had fallen by half by 2015 but remain nearly the same this year. Consequently, low- and moderate-income adults are uninsured at rates as much as 10 times higher as those for adults with higher incomes.

Our survey findings suggest that the overall growth in marketplace and Medicaid coverage has not resulted from Americans leaving their employer-based plans but from people who previously lacked health insurance now able to get coverage. The share of adults enrolled in employer plans has remained relatively stable, falling from 56 percent in 2013 to 53 percent in 2016 (data not shown). Consistent with this, we find that 45 percent of adults enrolled in marketplace plans and 62 percent of adults newly covered by Medicaid were uninsured before they enrolled (Exhibit 3). Of this group, 59 percent with a marketplace plan and 49 percent with Medicaid had been without insurance for a more than two years (Exhibit 4).

But the survey findings also suggest that the marketplaces and Medicaid may be helping to bridge coverage gaps when people lose employer-based health insurance. One-third (34%) of marketplace enrollees said they had had employer coverage prior to getting their current coverage. Among surveyed adults with employer coverage for less than a year, 7 percent reported that they had marketplace coverage prior to enrolling in their employer plan and 11 percent had been enrolled in Medicaid (Exhibit 5).4

Marketplace Plans and Medicaid Are Enabling People to Get Health Care

To provide people with the means to get the health care they need, insurance must come with reasonable levels of cost-sharing and adequate provider networks. The survey findings suggest that for the majority of those insured through the marketplaces or Medicaid, their new coverage appears to be facilitating access to care.

According to the survey, three-quarters (73%) of marketplace enrollees and 93 percent of Medicaid enrollees who have had coverage for two months or less said their ability to get health care had improved or stayed the same since getting their insurance (Exhibit 9). However, about 11 percent of those with new marketplace coverage and 4 percent of those with new Medicaid coverage said their ability to obtain care had gotten worse.

From the outset, certain characteristics intrinsic to the ACA’s coverage options have increased the likelihood that enrollees would have trouble finding doctors and getting appointments in a timely fashion. The law’s designation of the second-lowest-cost silver plan in the marketplaces as the benchmark for determining premium subsidies, and limits on cost-sharing, have incentivized insurers to use narrow provider networks to drive down premiums.5 In addition, Medicaid’s historically low provider reimbursement rates compared with commercial plans’ limit provider participation in the program.

Yet over the three years of the insurance expansions, our ACA Tracking Survey has found that the experience of marketplace and Medicaid enrollees in finding doctors and getting appointments is similar to that reported by insured Americans as a whole.

Access to primary care doctors. In 2016, one-quarter of marketplace or new Medicaid enrollees had tried to find a new primary care or general doctor since getting their insurance (data not shown). Of those, 58 percent said it was somewhat or very easy to find one (Exhibit 10). That is similar to the rate for insured adults overall reported in other surveys.6

Likewise, 53 percent of the combined sample of marketplace and new Medicaid enrollees who found a new primary care doctor were able to get an appointment with that doctor within two weeks the last time they tried (Exhibit 10).7 Again, this is similar to wait times reported by insured adults overall.8

Access to specialists. Wait times for specialists were also similar to rates found for other insured adults.9 Two of five (41%) marketplace and new Medicaid enrollees needed to see a specialist during the time they had had their coverage (data not shown). Of those, 60 percent were able to secure an appointment within two weeks (Exhibit 11).10

After falling sharply in 2014 upon rollout of the ACA’s major coverage expansions, the uninsured rate for U.S. working-age adults has been declining at a slower pace. The chasm in insurance coverage between lower- and higher-income adults remains troubling. We will explore the possible reasons for this in a forthcoming brief.

In each year since the coverage expansions, our survey findings have indicated that overall enrollment has been propelled by people who were previously uninsured—a year or longer for the vast majority. Consistent with other national surveys and Congressional Budget Office analyses, enrollment has not been driven by people shifting out of employer coverage: the share of adults insured through an employer has declined only slightly since 2013.11 The survey findings do suggest that for people who lose their job-based health benefits, the expanded insurance options may be helping to bridge the coverage gap.

The improvements in access to care found in the survey demonstrate that the ACA’s coverage options have filled gaps in coverage and care for millions of adults (Table 1). Majorities of enrollees are using their plans to get care they could not have afforded before. And a majority of recent enrollees indicate their ability to get care since obtaining their coverage has improved or stayed the same. Moreover, their ability to find doctors and get appointments is similar to that of insured Americans overall.

All these findings may explain why majorities of enrollees give their health plans high ratings. If the fundamental purpose of health insurance is to provide people with adequate access to needed health care, then it would seem that, on balance, the Affordable Care Act’s coverage expansions are working well for most of the people who have enrolled in them.

a The number of people in the “Enrolled in a private health plan through the marketplace” and the “Enrolled in Medicaid” columns do not sum to the number in “Total current marketplace and Medicaid enrollees” column because some adults are not sure whether they are enrolled in Medicaid or private coverage.
b Includes those who signed up for Medicaid through the marketplace and those who have been enrolled in Medicaid for less than three years.
c At least one of the following chronic conditions: hypertension or high blood pressure; heart disease; diabetes; asthma, emphysema, or lung disease; or high cholesterol.
d The following states expanding their Medicaid program and began enrolling individuals in February 2016 or earlier: AK, AR, AZ, CA, CO, CT, DE, HI, IA, IN, IL, KY, MA, MD, MI, MN, MT, ND, NH, NJ, NM, NV, NY, OH, OR, PA, RI, VT, WA, WV, and the District of Columbia. All other states were considered to have not expanded.
e The following states have state-based marketplaces: CA, CO, CT, ID, KY, MA, MD, MN, NY, RI, VT, WA, and the District of Columbia. All other states—including HI, NM, NV, and OR, which operate their own marketplaces but use HealthCare.gov for enrollment—are considered to have federally facilitated marketplaces.
f Base: full- and part-time employed adults ages 19–64.
— Not applicable.
Source: The Commonwealth Fund Affordable Care Act Tracking Survey, February–April 2016.

4 We do not know, however, whether those adults who had Medicaid prior to gaining employer coverage were enrolled through the ACA coverage expansions.

5 As Jon Gabel and colleagues point out, the law’s metal tiers defined by actuarial value do not exist in the employer market and protect consumers from ever-higher cost-sharing that would inevitably result from greater price competition. See J. Gabel, M. Green, A. Hall et al., Changes in Consumer Cost-Sharing for Health Plans Sold in the ACA’s Insurance Marketplaces, 2015 to 2016 (The Commonwealth Fund, May 2016).

6 In the Commonwealth Fund Biennial Health Insurance Survey, 2014: among adults who were insured all year and had tried to find a primary care provider, 57 percent said it was somewhat or very easy to find one (unpublished data).

9 According to the 2013 Commonwealth Fund International Health Policy Survey, among continuously insured adults ages 18 to 64, 42 percent of U.S. adults who needed to see a specialist reported that they were able to get an appointment in one week or less (unpublished data).

10 Differences in reported wait times between marketplace and new Medicaid enrollees are not significant. 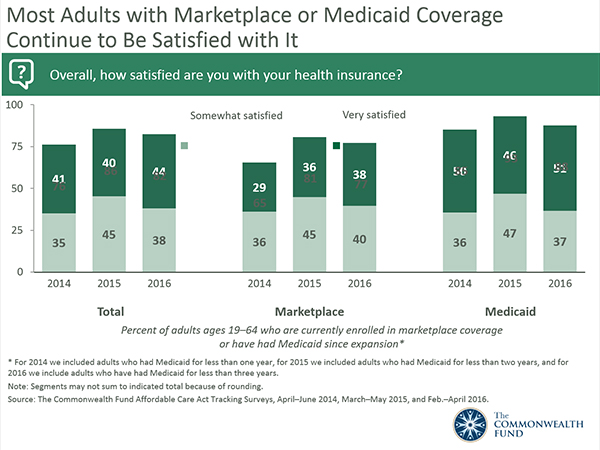 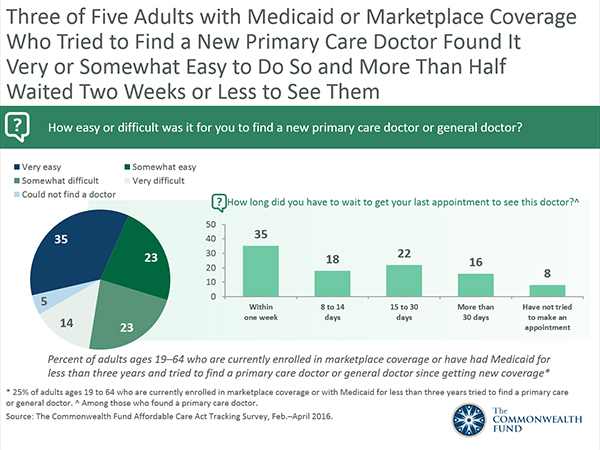 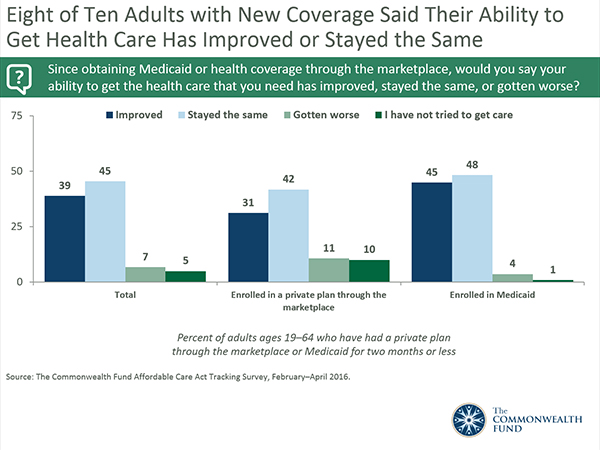 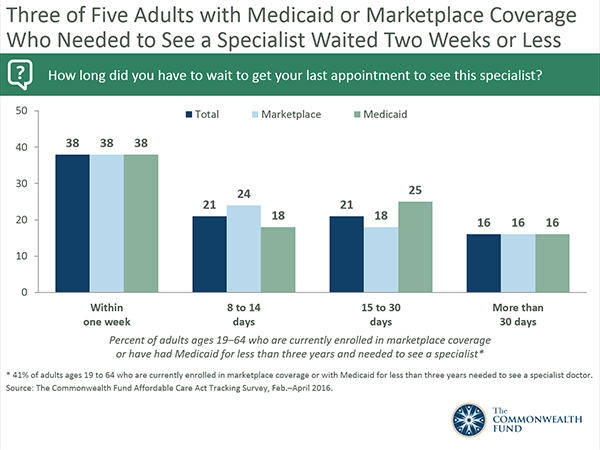 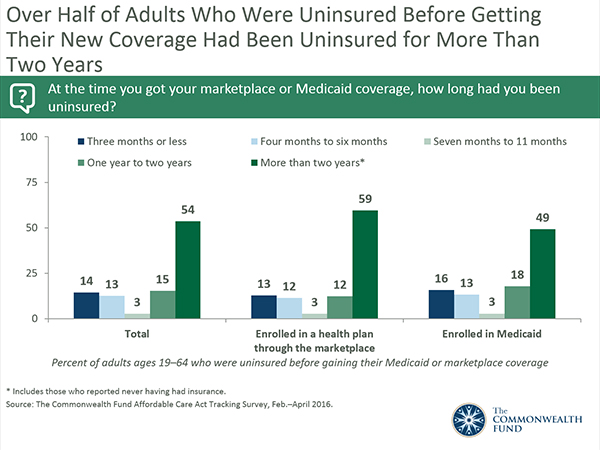 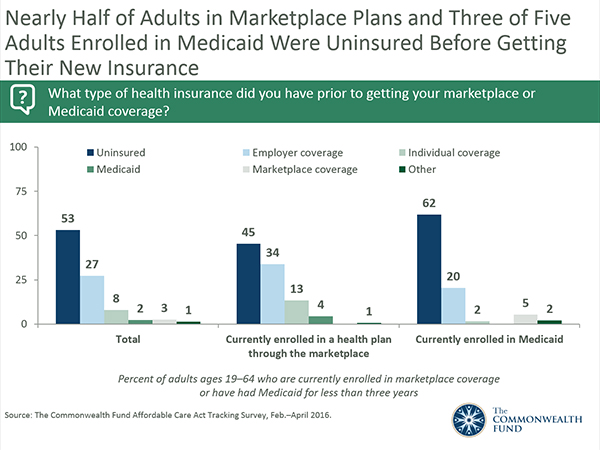 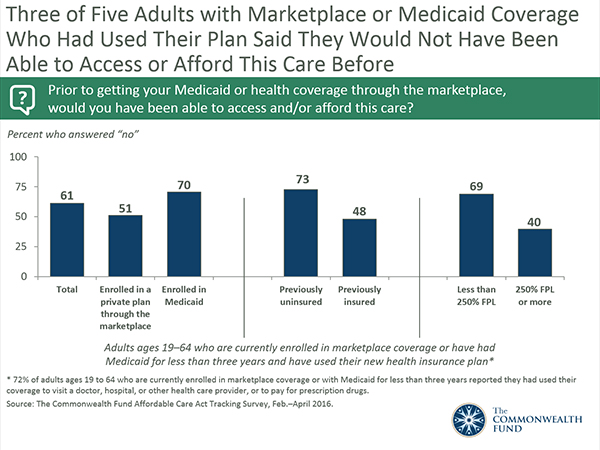 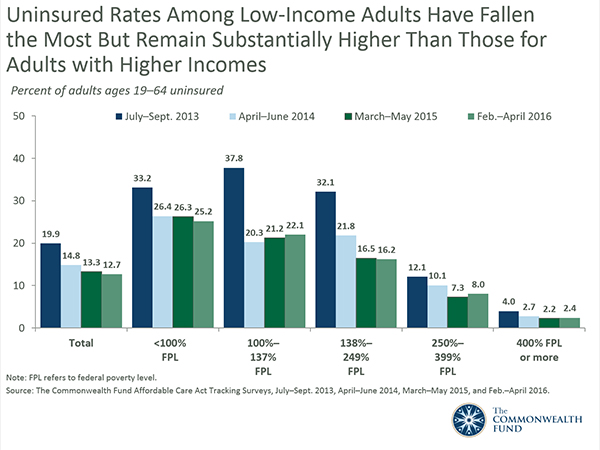 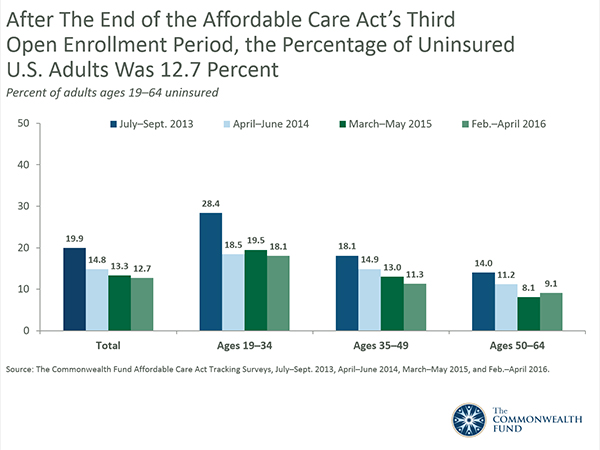 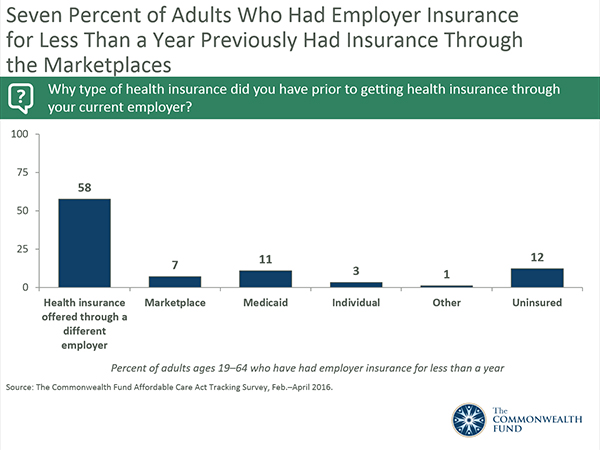 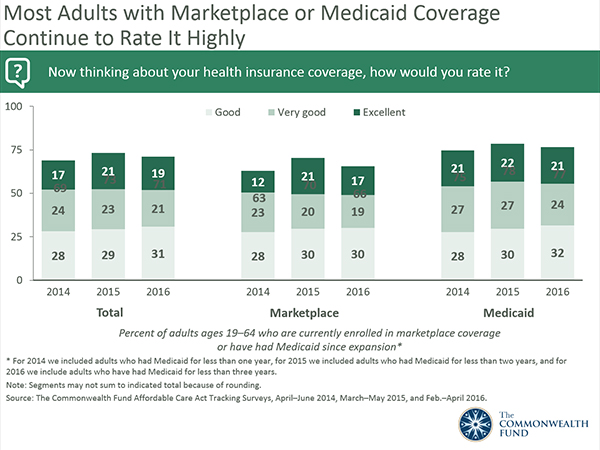