A Comparison of Health Care Use, Affordability, and Outcomes Among Men in the U.S. and Other High-Income Countries

Whether it’s stubbornness, an aversion to appearing weak or vulnerable, or other reasons, men go to the doctor far less than women do.1 While behavioral and cultural norms may have a lot to do with the care-seeking habits of American men, the fact remains that the United States is the only high-income country that does not ensure all its residents have access to affordable health care. Roughly 16 million U.S. men are without health insurance, and affordability is the reason that people most often cite for why they do not enroll in a health plan.2 Do income level and financial stress help explain why men do not get needed care and experience worse health outcomes?

Using data from the Commonwealth Fund’s 2020 International Health Policy Survey and the Organisation for Economic Co-operation and Development (OECD), we compare health care accessibility, affordability, and health status for adult men in 11 high-income countries. We also examine measures of income and income-related stress, where the data allow, to understand the role income insecurity might play in American men’s relatively low use of health care. (See “How We Conducted This Study” for further details on our methods.) 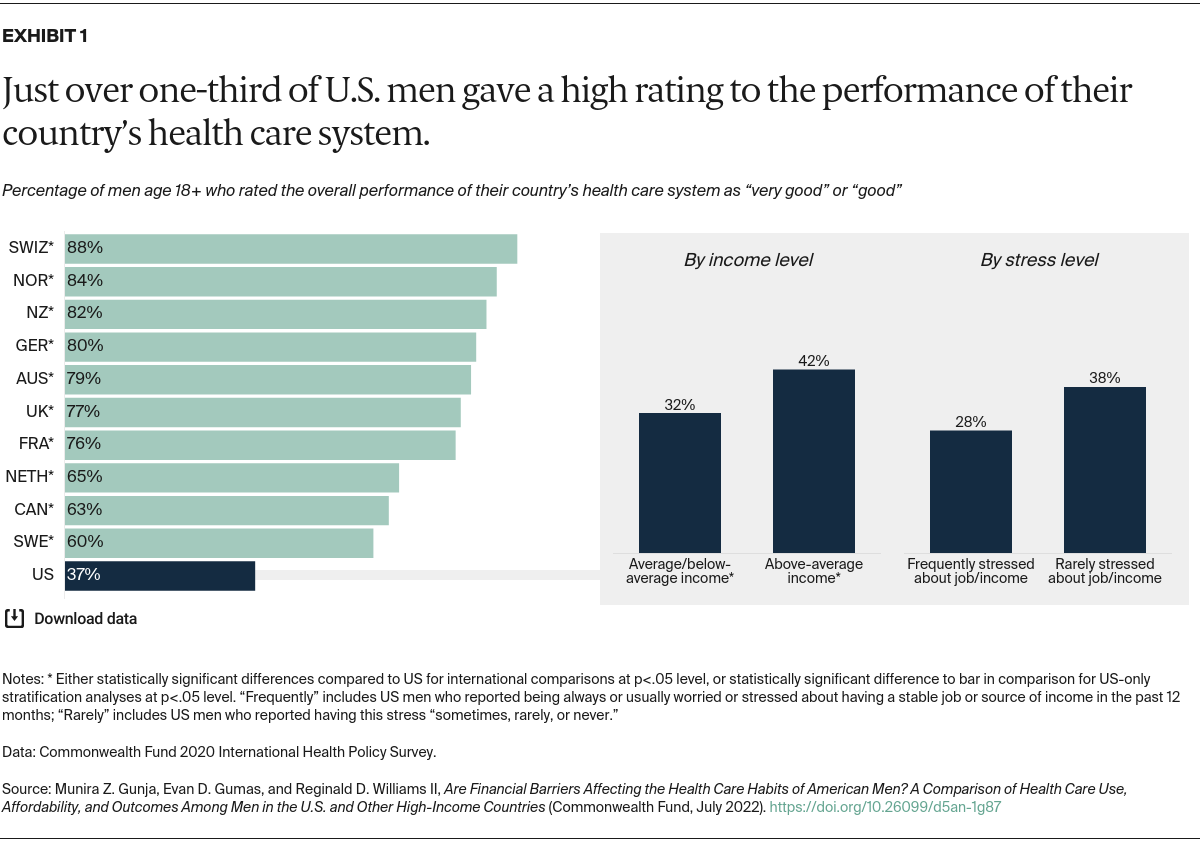 Men in the U.S. were significantly less likely to rate the health care system “good” or “very good” than men in other countries. Most men in Switzerland, Norway, New Zealand, and Germany gave high ratings to the national health care system.

The Commonwealth Fund survey asked adults in the 11 countries what their income is and how often in the past 12 months they felt worry or stress about having a stable job or source of income. Men in the U.S. who reported above-average income viewed the health care system more favorably than those with average or below-average incomes, though these ratings were still lower than those in peer nations. While these findings show that income level is a factor in how likely someone is to view the health system favorably, other factors, such as the affordability of health care, may also contribute to people’s views.3 The health system ratings of men in the U.S. who rarely experienced income-related stress were not statistically different from those of men who frequently experienced such stress. 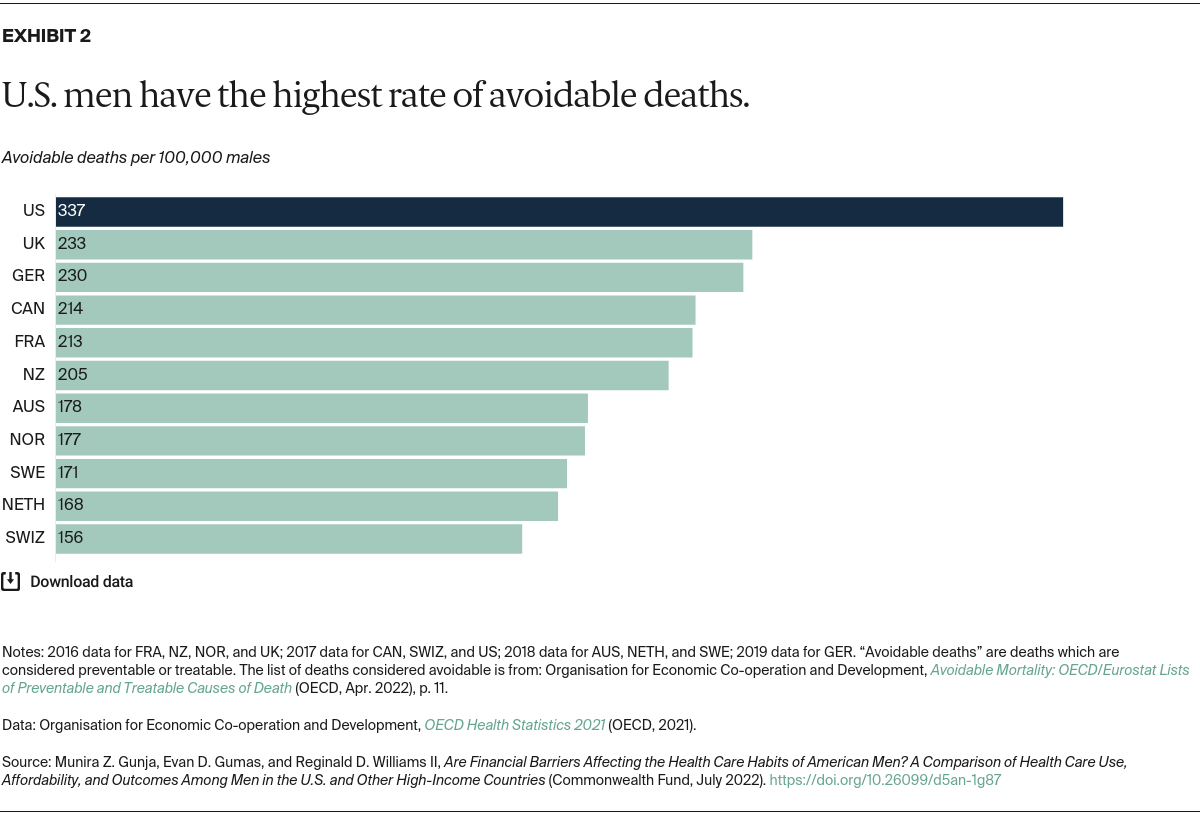 High rates of avoidable deaths, or deaths before age 75 which occur from conditions that can be prevented or treated, often indicate shortcomings in public health and care delivery systems. The United States had the highest rate of deaths from avoidable causes among men, and over 100 deaths more than the nation with the second-highest rate, the United Kingdom.

Swiss men are less than half as likely as American men to die from an avoidable cause. 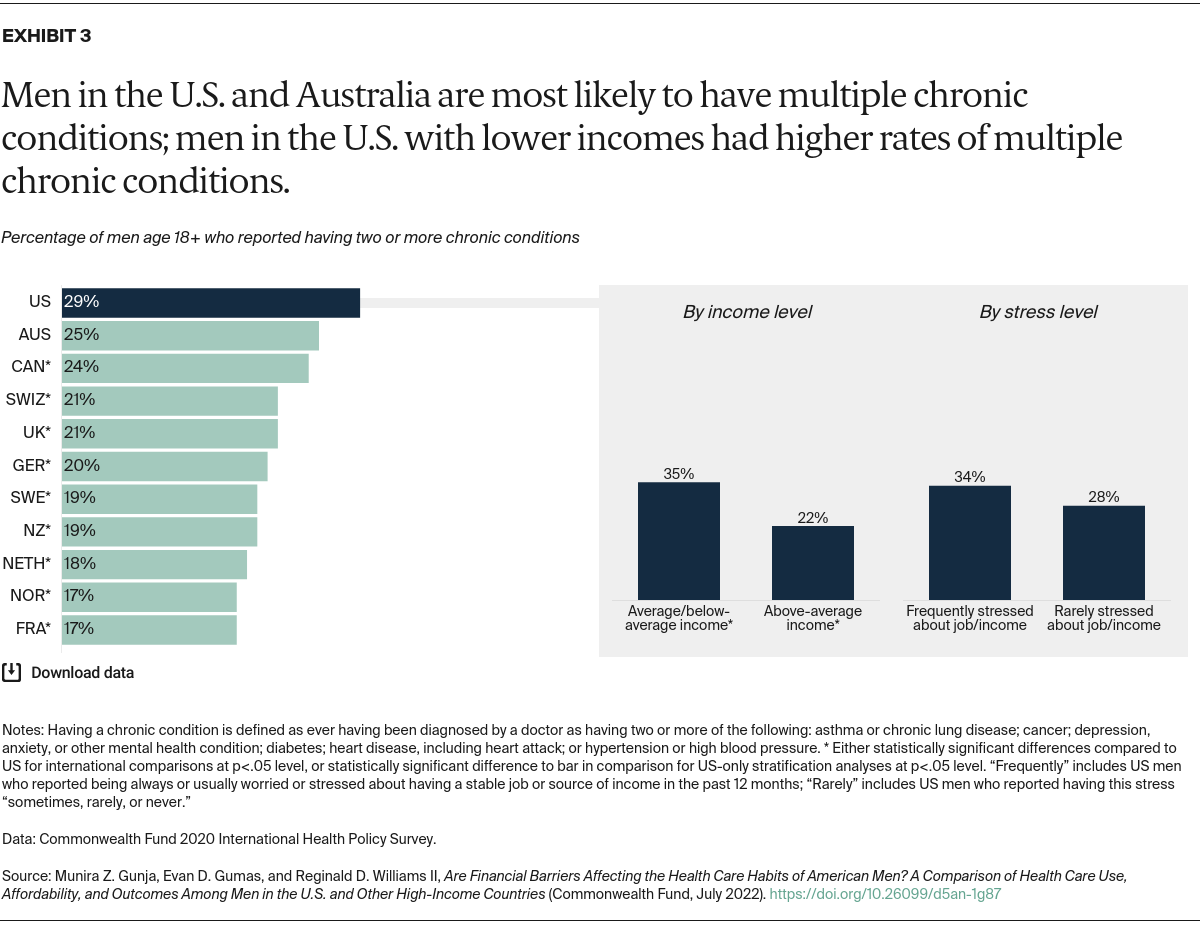 People are more likely to suffer from serious health conditions when they do not get regular screenings and other preventive services, or when they skip or delay doctor’s appointments for management and treatment of chronic conditions like cancer, diabetes, and hypertension, or mental health issues like depression and anxiety.4

Men in the U.S. were the most likely to report having two or more chronic conditions, with those in Australia close behind.

Lifestyle and income play a key role in health outcomes. Research has found that adults with lower income have significantly higher rates of smoking and alcohol use — behaviors that directly contribute to higher rates of obesity, diabetes, and heart disease, among other conditions.5 In the U.S., lower income was associated with an increased likelihood of having multiple chronic conditions as well as a four times greater likelihood of being in fair or poor health.6 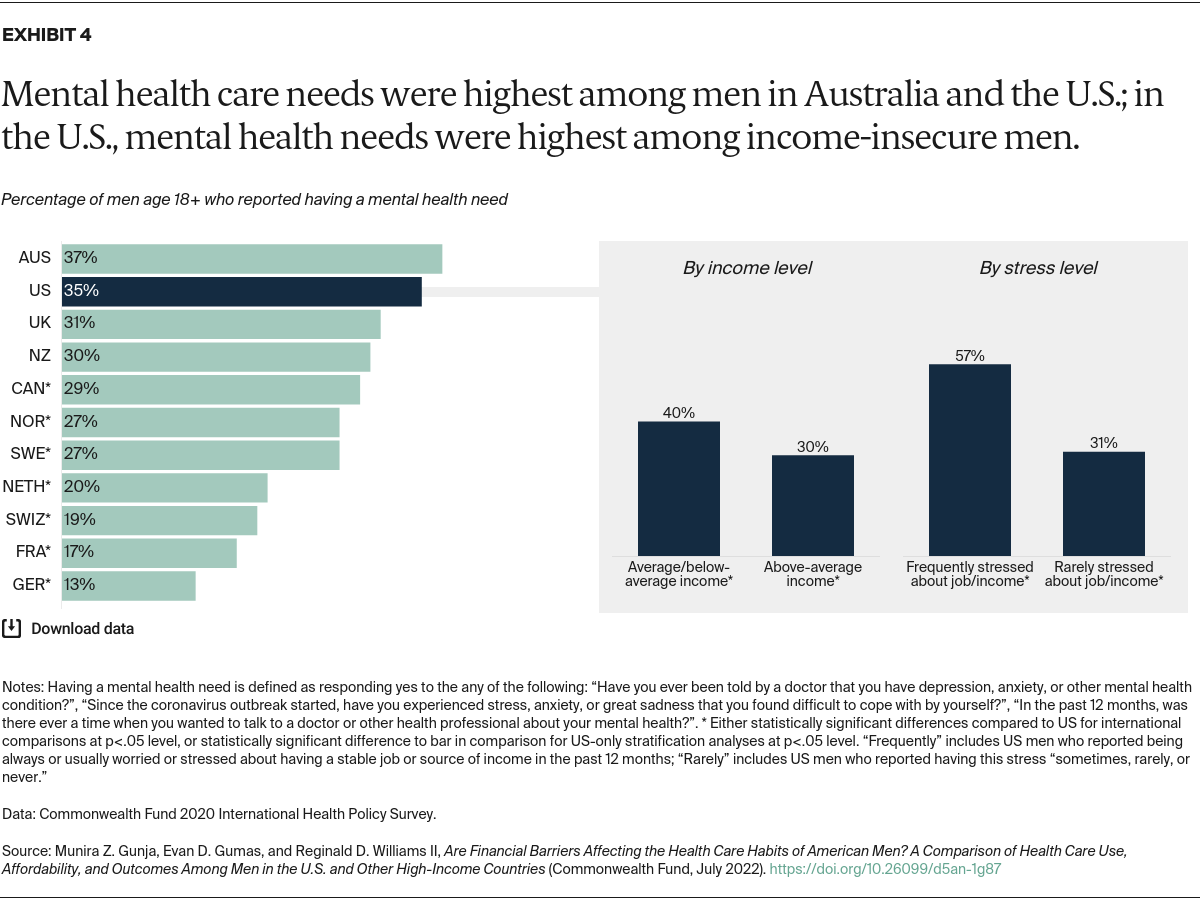 Mental health care needs were highest among men in Australia and the U.S. These needs related to a physician’s diagnosis of depression, anxiety, or other mental health conditions; stress, anxiety, or great sadness since the COVID-19 pandemic began; or a desire to talk to a mental health professional within the past 12 months.

Again, there were significant differences linked to income and stress level. In the U.S., men with income insecurity were more likely to have a mental health care need. 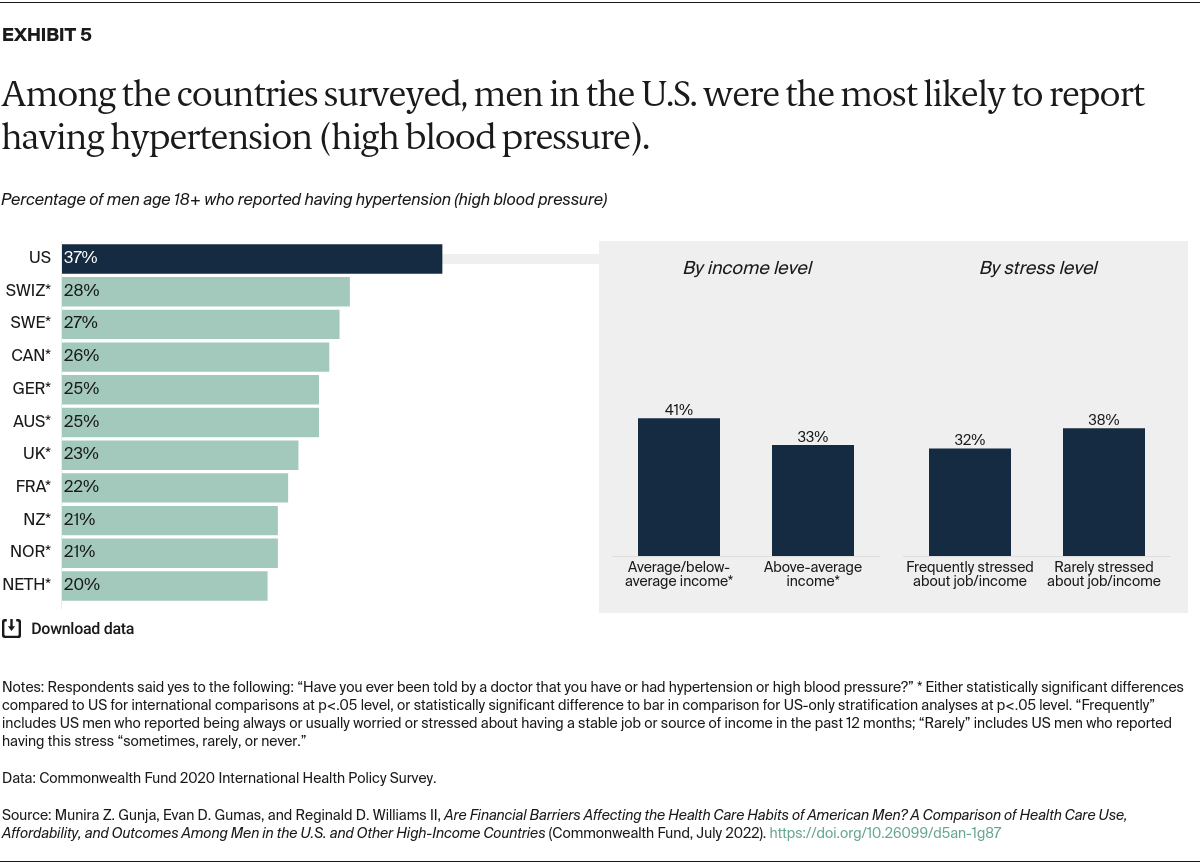 More than a third of American men reported having hypertension (high blood pressure) — a treatable and, in most cases, preventable condition. That is the highest rate among the countries surveyed. In the U.S., men with average or below-average income were more likely to say they have hypertension than those with higher income.

Surprisingly, experience of financial stress was not significantly associated with rates of hypertension. 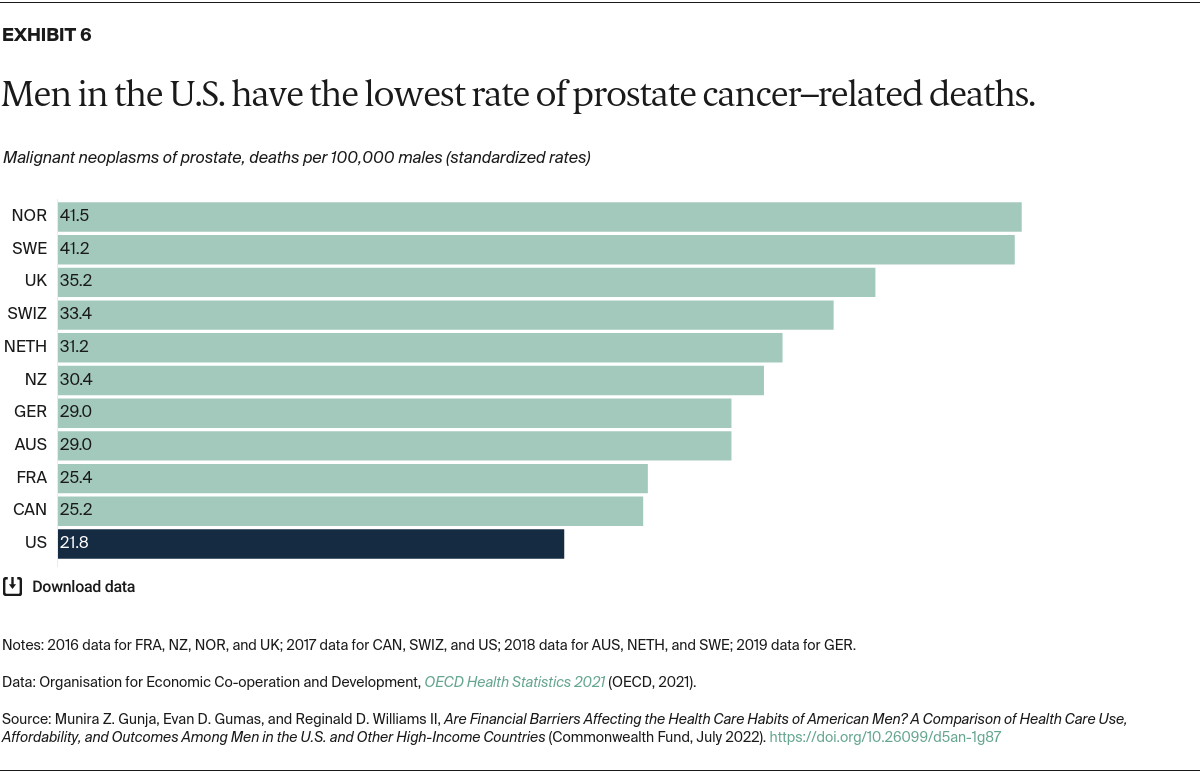 While American men are more likely to lack easy access to regular primary and preventive care, cancer care is one area where U.S. health outcomes are comparatively better than other high-income countries. In 2019, men in the U.S. had the lowest rate of prostate cancer–related deaths among the 11 countries in our study.8

The relatively lower U.S. prostate cancer death rate likely reflects the quality of cancer care in the U.S., which features extensive screening as well as a variety of advanced treatments and technologies. U.S. cancer death rates have dropped significantly over the past three decades, largely a result because of better screening for the disease.9 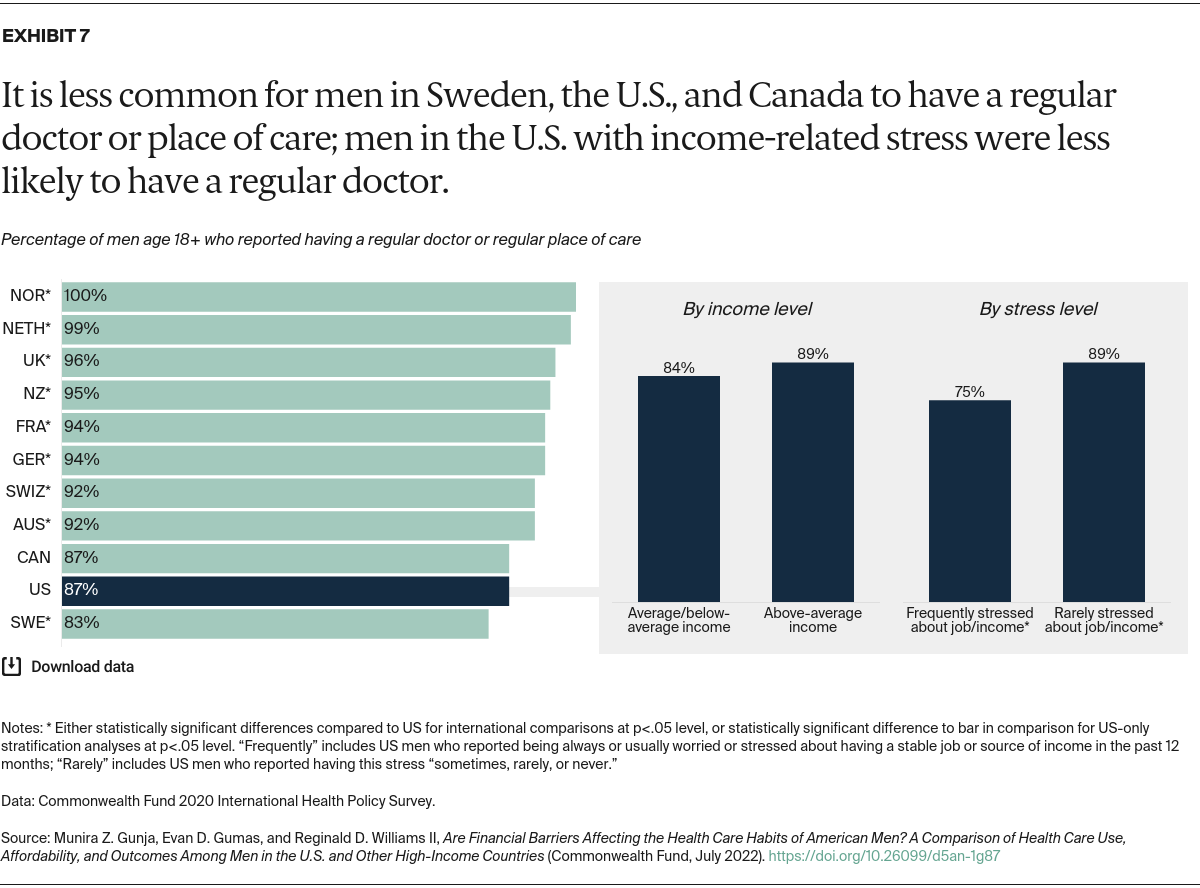 A physician’s office, clinic, or other regular place of care is an important point of health system contact for people — a key to getting timely and appropriate preventive services and treatment. Irregular contact with doctors means forgoing care for potentially life-threatening conditions.10

While the majority of men in each country surveyed reported having a doctor or place of care, men in Sweden, the U.S., and Canada were the least likely to report having one. All men in Norway, where enrollment in health insurance is automatic and the health system incentivizes all residents to have a general practitioner, said they have a regular doctor or place of care.11 Men in the U.S. who reported frequent income-related stress were less likely to have a regular doctor than those who did not report this. 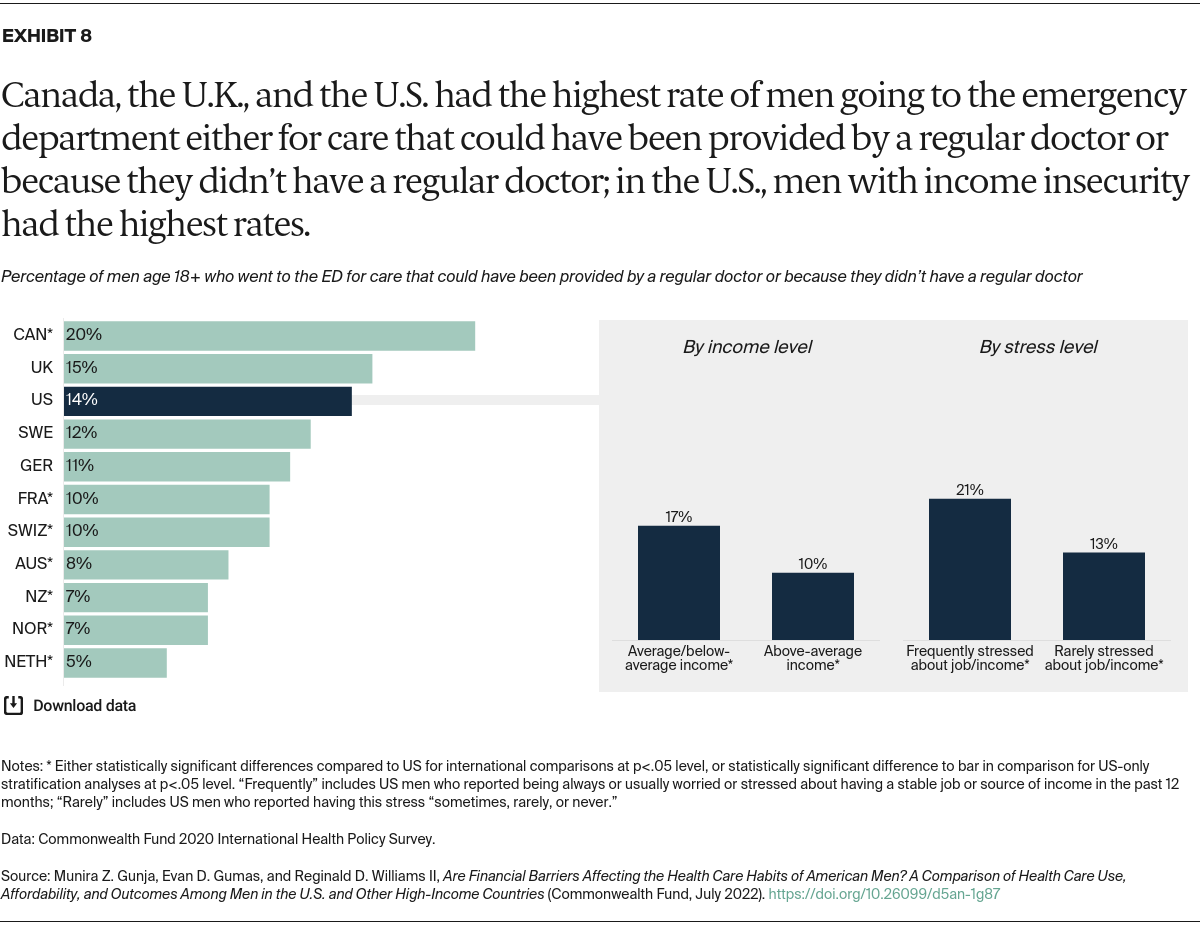 Overuse and improper use of emergency departments has been a concern in the U.S. for many years.12 These facilities often function at high capacity or overcapacity; the care they deliver is also expensive relative to many other health care settings. Among men who either did not have a regular doctor or did not use their regular doctor for routine care, those in Canada reported the highest usage of emergency departments, followed by men in the U.K. and the U.S. 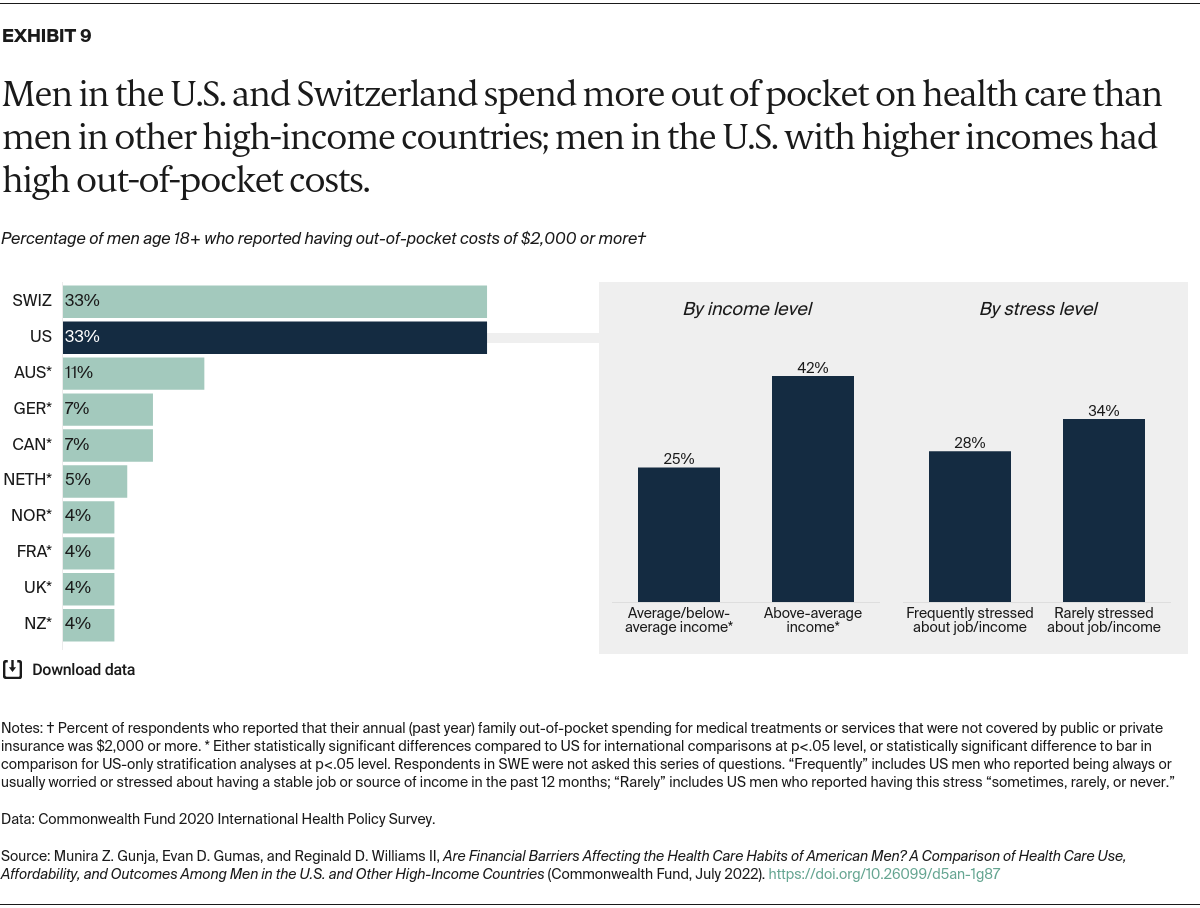 Men in the U.S. were significantly more likely to report spending $2,000 or more out of pocket on health care compared to men in the 10 other high-income countries, with the exception of Switzerland.

Higher-income men in the U.S. were more likely to have high out-of-pocket costs than lower-income men, which may be a consequence of using more health care services. 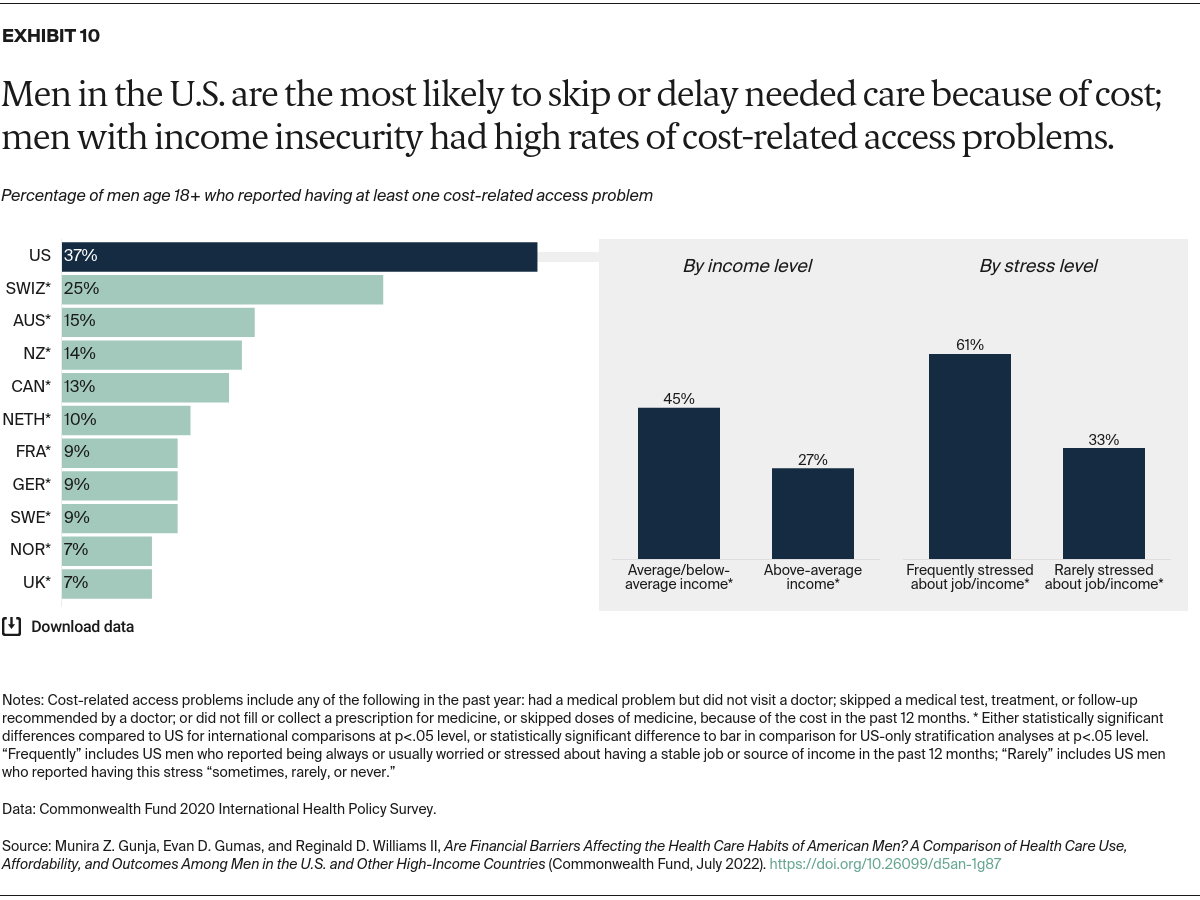 The Commonwealth Fund survey asked men about times when the cost of treatment prevented them from getting health care in the past year, including when they had a medical problem but did not visit a doctor; skipped a needed test, treatment, or follow-up visit; did not fill a prescription for medicine; or skipped medication doses. High costs associated with medical care may be a factor in why men skip needed treatment.

The findings show that men in the U.S., particularly those with income insecurity, are significantly more likely to skip or delay needed care because of costs than men in the other countries studied. 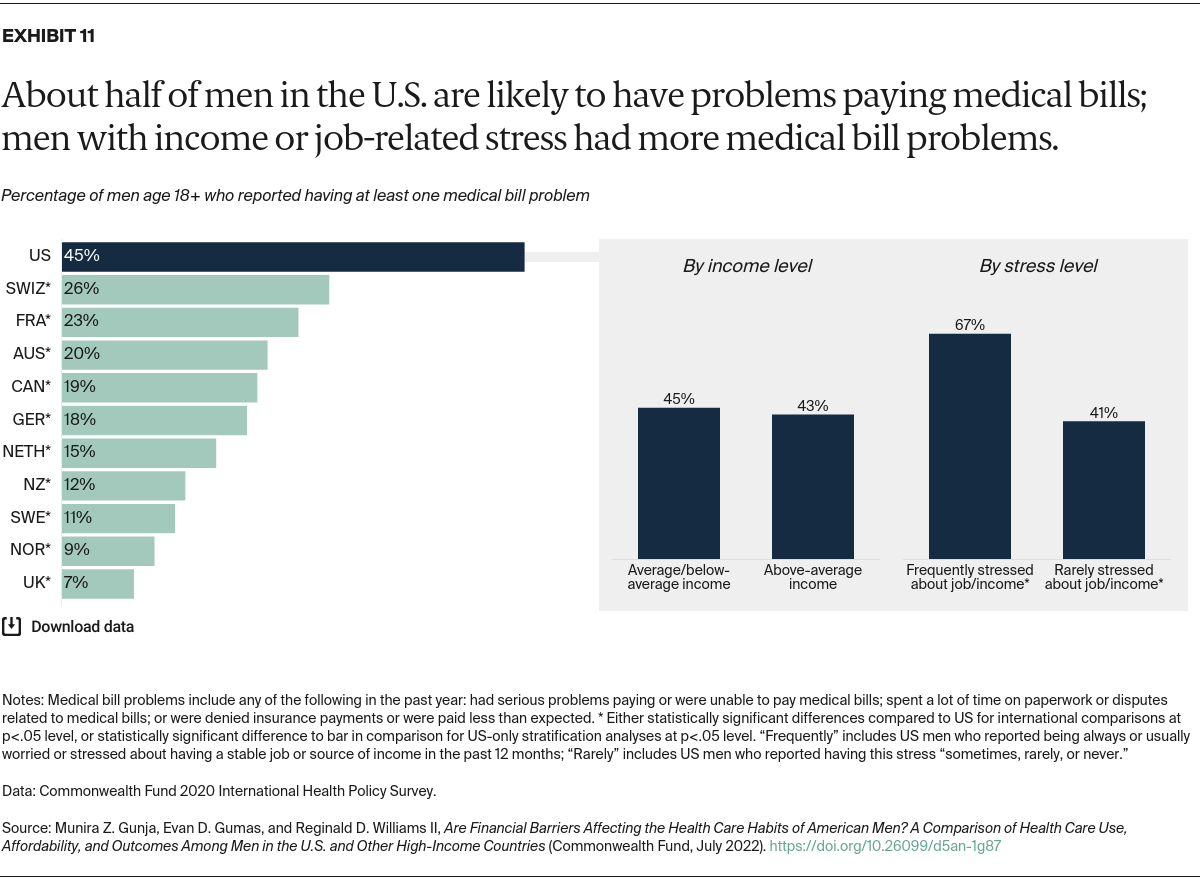 Men in the 11 countries were asked whether they’d had at least one medical bill problem in the past year, whether it was serious difficulty paying for care or being unable to pay a medical bill, spending a lot of time on paperwork or disputes related to medical bills, or having their insurer deny payment or pay less than expected for a claim.

Men in the U.S. who had frequent income-related stress were significantly more likely to report having a medical bill problem compared to those who rarely experienced this kind of stress. There was no significant difference by income level. This may reflect the fact that lower-income men are less likely to use health care and therefore less likely to incur health costs and medical bills, while higher-income men are at risk of incurring medical debt when they seek care because of poor insurance protection.13

Our analysis dramatizes the failings of the U.S. health care system with respect to men and complements our recent analysis of health and health care for women of reproductive age.14 While doing relatively well in prostate cancer care and treatment, the United States compares poorly to most other high-income nations when it comes to receipt of preventive care and affordability of care. And on nearly every health care measure we studied, men in the U.S. with income insecurity fared the worst. As a result, American men, particularly those with lower incomes and financial stress, have the poorest health outcomes.

Expanding access to affordable, comprehensive health coverage would be a first step toward reducing these disparities. Improvements also will require the combined efforts of physicians, health systems, insurers, and communities to promote preventive care and healthy behaviors, including through targeted education and outreach. For their part, American men must become more proactive about their health, and that should include establishing regular connections with a health care provider. After all, “going it alone” is rarely the path to well-being.

This analysis used data from the Organisation for Economic Co-operation and Development (OECD) and the 2020 Commonwealth Fund International Health Policy Survey.

The 2021 health statistics compiled by the OECD track and report on a wide range of health system measures across 37 high-income countries. Data on avoidable mortality were extracted in April 2022. While the information collected by the OECD reflect the gold standard in international comparisons, it may mask differences in how countries collect their health data. Full details on how indicators were defined, as well as country-level differences in definitions, are available from the OECD.15

For the 2020 Commonwealth Fund International Health Policy Survey, data were collected from nationally representative samples of noninstitutionalized adults age 18 and older in Australia, Canada, France, Germany, the Netherlands, New Zealand, Norway, Switzerland, Sweden, the United Kingdom, and the United States. Samples were generated using probability-based overlapping landline and mobile phone sampling designs in all but three countries. In Norway, Sweden, and Switzerland, respondents were randomly selected from listed or nationwide population registries. In the U.S., an address-based sampling frame was also incorporated to ensure a representative sample of respondents. Respondents completed surveys via landline and mobile phones, as well as online, in Sweden, Switzerland, and the U.S.

International partners cosponsored surveys, and some supported expanded samples to enable within-country analyses. Analyses in this brief were limited to men age 18 and older. Final sample sizes ranged from 296 in Norway to 2,211 in Canada. The survey research firm SSRS was contracted to conduct the survey with country contractors from February through May 2020. The field period across countries ranged from four to 15 weeks. Response rates varied from 14 percent to 49 percent. Data were weighted using country-specific demographic variables to account for differences in sample design and probability of selection.