This feature is the third post in a series, “Listening to Primary Care Physicians for Low-Income Patients,” that draws on focus group research to illustrate the challenges of serving low-income patients. This post uses primary care physicians’ words to illustrate how serving low-income patients in rural communities can be particularly challenging. 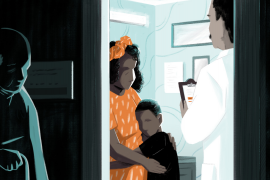 “Why I Love My Job”: Listening to Primary Care Physicians for Low-Income Patients

Vera Meier-Bennett, M.D., practices in the small, rural town of Lakeside, Arizona. Many of her patients travel an hour or more to see her, some from the White Mountain Apache Reservation because they’re dissatisfied with the care they receive through the Indian Health Service. Others are poor white families, working on farms or other low-wage jobs in Lakeside and its surrounding towns.

What they have in common is poverty: nearly all live at or below the poverty level — just $25,100 for a family of four in 2019. Meier-Bennett believes their health problems are closely tied to the scarcity of jobs, other resources, and the deep-seated social problems in this rural part of Arizona. Many of her patients lack food, transportation, running water, and electricity. “We end up with no-shows because the transportation doesn't show up on time or show up at all,” she said.

The Commonwealth Fund supported focus groups with 30 primary care physicians (PCPs) who serve low-income patients. We also conducted detailed follow-up interviews with three in rural communities to learn about the distinct challenges of providing care in rural America. Many rural health care providers and communities are struggling because need far outstrips supply. For example, there are 40 physicians per 100,000 people in rural America, compared with 53 per 100,000 in large cities. Further, PCPs in rural areas often serve a large geographic area and populations with an acute need for services, including a growing elderly population. Although telehealth services and other digital innovations help reach remote areas, neither are they well spread, nor are they a salve for poverty, acute social and behavioral health issues, lack of access to specialty care, and inadequate transportation to medical services.

It’s heartbreaking to see these patients, who have depression and anxiety stemming from their socioeconomic status.&nbsp;One of my patients, when their food stamps decreased by just a few dollars, felt she wouldn’t be able to survive.

‘My Patients Are Very Poor’

A large body of research indicates that poverty and health are closely associated: people with lower incomes report poorer health, have a higher risk of disease, and live shorter lives. Not only is a higher income associated with greater longevity, but the differences in life expectancy across income groups increased from 2001 to 2014. And the poverty rate in rural regions is higher than in urban America (16.9 percent vs. 13.6 percent in 2016).

Rural providers say many of their patients can’t pay for basic necessities, such as rent and food, let alone medication, which can have a dire impact on their health. “It’s heartbreaking to see these patients, who have depression and anxiety stemming from their socioeconomic status,” said Clara Shnaidman, M.D., who practices in a rural community in Perth, New York. “One of my patients, when their food stamps decreased by just a few dollars, felt she wouldn’t be able to survive.”

People with low incomes are also less likely to have health insurance. Although millions of people gained coverage through the Affordable Care Act’s Medicaid expansion, many poor adults in states that did not expand Medicaid still don’t have coverage.

“Getting medications for mental health [conditions] is challenging,” Meier-Bennett said. “We’re on the phone constantly with the insurance company, explaining that we are in a rural area and don’t have a lot of resources, and my staff spends hours trying to get these kids’ medications approved.”

You tell the parents, ‘more proteins, less carbs.’ But carbs are cheap – a box of pasta costs less than a buck, and so that is what the parents are able to buy.

‘My Patients Deal with Acute Social and Behavioral Health Issues’

The social problems that contribute to poor health are of course not unique to rural communities, but they tend to be felt more acutely in rural areas because they tend to have fewer social services. “In urban settings, it is easier to coordinate with local agencies offering social services,” explained one rural provider.

Rural primary care providers said many of their low-income patients do not have access or are unable to afford healthy food. This in turn contributes to obesity, diabetes, hypertension, and other problems.

“You tell the parents, ‘more proteins, less carbs.’ But carbs are cheap – a box of pasta costs less than a buck, and so that is what the parents are able to buy,” said Meier-Bennett. The schools around Lakeside, and on the White Mountain Apache Reservation, offer free lunch. “But the schools have a limited budget, too. So it’s carbs – cereal, pancakes, biscuits and gravy, all of these things that are so terrible for the kids. And they will eat it, because that may be the only meal they get all day.”

The hospital in Shnaidman’s community in rural New York gives patients vouchers for turkeys or hams on holidays, but this doesn’t mitigate their ongoing food insecurity.

Primary care doctors said anxiety and depression were two of the most common mental health issues they see; one said mental health was the “biggest challenge” in her community.

John Sharma, M.D., is a primary care doctor in Robinson, Illinois, where almost 14 percent of residents live below the poverty level. He frequently treats children with serious mental health issues, including suicidal 11- and seven-year-olds, and an eight-year-old who saw apparitions. In addition to stress, he thinks social factors can exacerbate children’s mental health problems. “I see a lot of divorce, broken homes – that’s a factor,” he said.

Rural primary care providers also point to their patients’ poor economic prospects and the hopelessness that may come from generational poverty. Many of Sharma’s adult patients piece together a meager income from multiple part-time or shift jobs. “The lack of choice in employment adds some mental stress to the parents, on top of the physical health issues. And ultimately it has a trickle-down effect on the children,” he said.

For Meier-Bennett’s Native American patients, trouble finding a job starts earlier, with a lack of educational opportunities. “The reservation has a casino so you can get a waitressing job there, or something at Home Depot, but a large proportion of the population is unemployed,” she said. This, she believes, contributes to a vicious cycle of poverty, which in turn impacts health.

Poverty and unemployment are associated with substance abuse, and contributed to America’s deadly opioid epidemic, which drove a large portion of the 70,000 drug overdose deaths in 2017, according to the latest data from the Centers for Disease Control and Prevention. Many of the primary care providers we spoke with in rural communities said that drug abuse — and substance use more broadly — are ravaging the lives of their patients.

Meier-Bennett believes that the parents of a five-year-old patient who drowned in a bathtub were using methadone. Another consequence of drug use among adults in her community is that many children end up in foster care, she said.

Substance use disorders often occur among patients coping with mental illness, and vice versa. But in the absence of accessible treatment options for either, rural primary care doctors often find themselves doubling up as mental health and addiction treatment providers.

In small, rural towns, there are fewer specialty practices, so patients may need to wait longer to get an appointment, or have to travel farther to see a doctor. Medicaid, the nation’s main insurer for low-income patients, pays less for specialty care than do other insurers, so many specialists are unwilling to treat the poor.

As a result, access to specialty care is uneven at best in rural America. Many of the providers we spoke with said mental health care was one of the hardest specialties for their patients to access; one Georgia primary care physician told us mental health providers are “almost impossible” to find. Shnaidman in New York said her patients do have access to some specialists, including a neurologist and cardiologist. “But mental health care is just so poor in our area, and you can’t get your patients in to a psychiatrist sometimes for three months when you need it literally the next day, because they are having suicidal thoughts or are in a manic phase of bipolar,” she said.

A West Virginia physician said that while her patients have access to many specialties, there aren’t enough neurologists or rheumatologists in close proximity.

Such obstacles are compounded because many low-income patients can’t afford to travel to clinics or hospitals far away from their homes. In rural areas, transportation is a persistent problem even when it comes to seeing a primary care provider. “Our Medicaid program will pay for transportation, but it’s so limited. Usually, the patients have to find somebody to drive them — and that isn’t easy,” said Meier-Bennett.

“Transportation can be a big issue . . . when the patient is not able to get to my office, they miss the appointment. Sometimes insurance will cover transportation, if they’re given enough notice. But if there is an emergency, you can’t give notice,” Shnaidman said. One of her patients called in with bad diarrhea, but couldn’t get a ride to her clinic. He stayed home until his condition was so severe that he ended up in the intensive care unit.

One primary care provider told us he makes home visits because transportation is the “biggest issue. Part of my visit to their home also allows me to get a better understanding of their environment. . . . Is there food in the cupboards or fridge, expired food, that type of thing?”

As she watches her patients’ health worsen because they can’t find a way to get to her clinic, Meier-Bennett thinks one solution would be to bring care to them — and to pay closer attention to the social issues that drive poor health in her rural Arizona community. “I would call it ‘Wellness on Wheels,’ some sort of van where we could go up to the reservation, bring education on birth control and vaccines, teach people about exercise and how to cook nutritious food. I want to bring a farmer’s market up there — if they can’t get out, we have to bring it to the people.”

In both rural and urban settings, other solutions, which we will explore in greater detail in the final piece in this series, include: removing financial barriers that prevent patients from accessing primary care services, like high deductibles and copays, and expanding safety-net coverage. Another way to address the shortage of primary care physicians would be to change the way care is paid for to better recognize the value of primary care. Finally, strengthening the connections between health care and social service delivery would help mitigate the impact of poverty and some of the other social contributors to poor health.

In the next piece in this series, we will explore solutions for primary care providers serving low-income patients.