Traditional Medicare or Medicare Advantage: How Older Americans Choose and Why

Since almost the inception of the Medicare program, beneficiaries have had the choice of receiving coverage through traditional Medicare or private insurance plans, known today as Medicare Advantage plans. Each year, during Medicare open enrollment, beneficiaries can reassess their coverage options to decide which coverage best meets their health needs and budget. Little research has been conducted to understand how and why beneficiaries make these choices.

In the Commonwealth Fund’s 2022 Biennial Health Insurance Survey, we asked people age 65 and older who were enrolled in Medicare as their primary source of coverage why they chose Medicare Advantage or traditional Medicare, and what resources they used to choose their coverage. The survey firm SSRS interviewed a nationally representative sample of 8,022 adults age 19 and older between March 28 and July 4, 2022. This analysis focuses on 1,605 respondents age 65 and older who were enrolled in Medicare. To learn more about our survey, including the revised sampling method, see “How We Conducted This Survey.”

Choice. Extended benefits were the most common reasons cited for choosing a Medicare Advantage plan. About one in four (24%) Medicare beneficiaries enrolled in a Medicare Advantage plan cited its additional benefits, while one in five (20%) pointed to a limit on out-of-pocket spending as the main reason for their choice. A larger share of people with the lowest incomes (below 100% of the federal poverty level, or FPL) than those with the highest incomes (over 400% of FPL) cited the additional benefits (36% vs. 20%, respectively) and a smaller share of dual-eligible beneficiaries (low-income adults enrolled in both Medicare and Medicaid) cited the out-of-pocket limits (8% vs. 22%, respectively) as their main reason for choosing Medicare Advantage over traditional Medicare.

Greater choice in providers was the reason most frequently given for choosing traditional Medicare. This was true for beneficiaries who supplement their coverage with a private insurance plan as well as those who don’t supplement, although beneficiaries with supplemental coverage cited provider choice as the primary reason at two times the rate of those without it (50% vs. 22%). 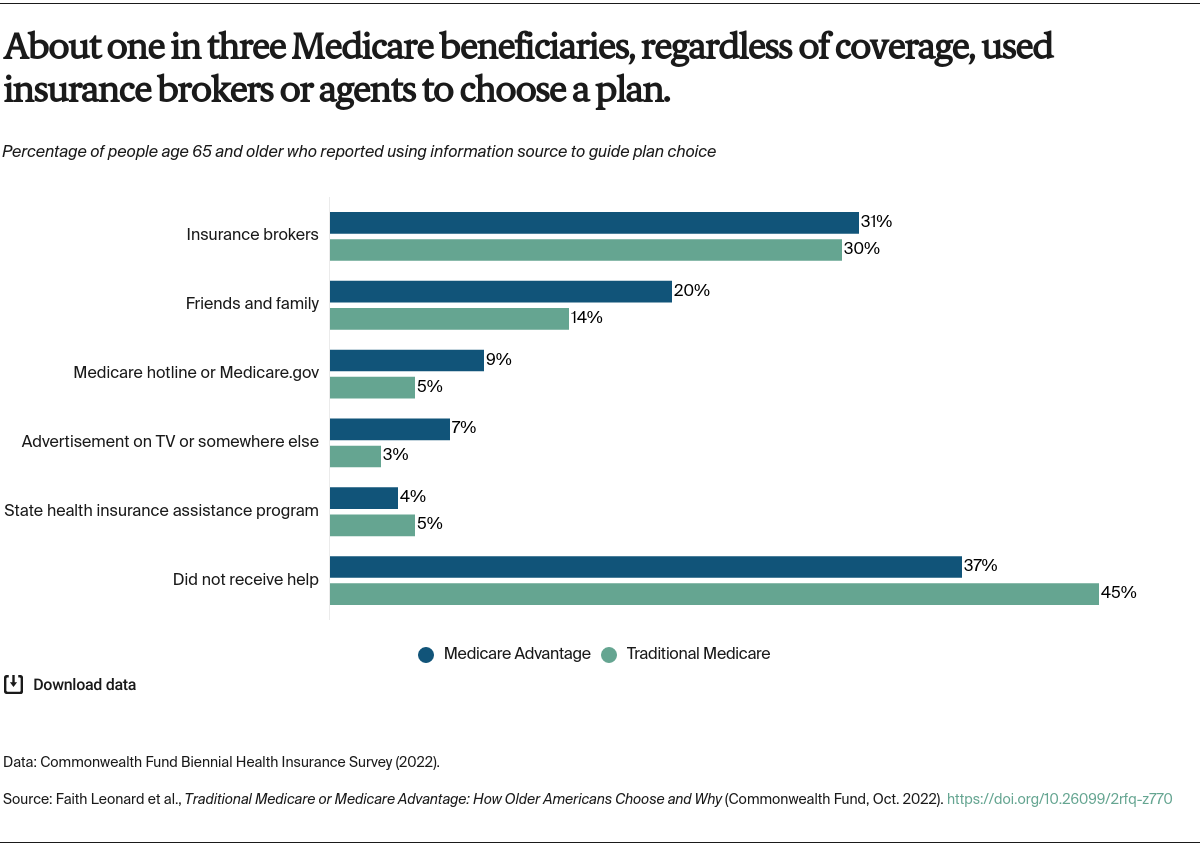 Decision-making. Medicare beneficiaries have a variety of sources for information and advice on Medicare plan choices. According to the survey, about 40 percent did not receive any help with their plan choice. A larger proportion of people with incomes above 400 percent of FPL reported not receiving help (56%) (see the appendix table).

In 2022, people who received help with their plan choice most frequently turned to brokers and agents for help;4 this was true for both traditional Medicare and Medicare Advantage enrollees. About one in five beneficiaries (18%) relied on friends and family to help make coverage decisions.

Marketing. Complaints about misleading or false marketing made against Medicare plans and their contractors more than doubled year-over-year between 2020 and 2021.5 Overall, about 6 percent of survey respondents reported that marketing was a source of information in choosing a plan. However, about 12 percent of Black survey respondents reported that advertisements were helpful to them, compared to only 5 percent of white respondents. Likewise, 12 percent of beneficiaries in the lowest income category (below 100% of FPL) said they had been informed by advertising and marketing efforts, compared to only 2 percent of those in the highest income category (above 400% of FPL).

Medicare beneficiaries, regardless of their source of coverage, seem to most frequently rely on the one-on-one help provided by brokers and agents in choosing a Medicare plan. But brokers and agents are paid commissions by insurers, which can influence the kind of information they provide. While government-funded SHIPs are designed to provide unbiased, one-on-one help, these programs remain underutilized. That’s perhaps because they rely heavily on volunteers, and because their staff lack the capacity that brokers and agents have to reach beneficiaries, many of whom may not be aware of SHIPs. The relatively low percentage of respondents who used Medicare.gov or the Medicare hotline also raises questions about whether these resources are known to beneficiaries and are meeting their needs.

A growing number of older Americans are choosing Medicare Advantage plans over traditional Medicare, and beneficiaries are reaching for different sources of information and support to make their coverage decisions. It’s important to learn how these sources inform beneficiaries, whether they are equitably accessible, and what kinds of services and information are needed to fill any gaps. Regardless of where beneficiaries get information for making their coverage decisions, having accurate, easy-to-use tools would help them evaluate their options.