One of the defining features of the Medicare Advantage program is that it enables private plans to offer benefits that are not available in traditional Medicare, including coverage for dental, vision, and hearing services. Many plans go beyond this to attract enrollees, offering perks like gym memberships and rides to medical appointments. In exchange, enrollees may have to accept more limited provider networks or forms of utilization management, such as obtaining prior authorizations before receiving certain services, like placement in a skilled nursing facility.

We asked experts to reflect on the ways Medicare Advantage plans approach benefit design, including the types of extra benefits offered and members’ out-of-pocket costs.

Erin Trish, Ph.D., co-director of the USC Schaeffer Center and assistant professor in the department of pharmaceutical and health economics at the USC School of Pharmacy

What Do We Know About Supplemental Benefits?

Through the CHRONIC Care Act of 2018, Congress expanded the types of supplemental benefits plans can offer, going well beyond vision, dental, and hearing benefits. The law enables Medicare Advantage plans to cover services like adult day care, support for family caregivers, pest control, and other benefits that may help members maintain or improve their health. It also permits plans to tailor supplemental benefits to the chronically ill by waiving the uniformity requirement that previously compelled plans to offer the same benefits to everyone in a region. Because of this flexibility, determining which plans offer which supplemental benefits and to whom is not easy.

Several experts said the rule recently proposed by the Centers for Medicare and Medicaid Services (CMS) requiring Medicare Advantage plans to report how much they spend on specific supplemental benefits could help, but many wanted more detailed reporting on the number of individuals who receive these benefits, in which locations, and at what frequency.

Vague categorization and labeling of supplemental benefits also remain a problem, several said. For example, caregiver support can be classified into multiple categories and plans use a wide variety of terms for dental services, making it hard for consumers to compare plans. Some experts wanted to see a standardization of terms and further evaluation of the impact of supplemental benefits on health outcomes and spending. Do dental benefits lead to fewer emergency department visits, and for whom? Do vision benefits reduce falls? Such evidence could be used to inform discussions about whether to offer such benefits in traditional Medicare. 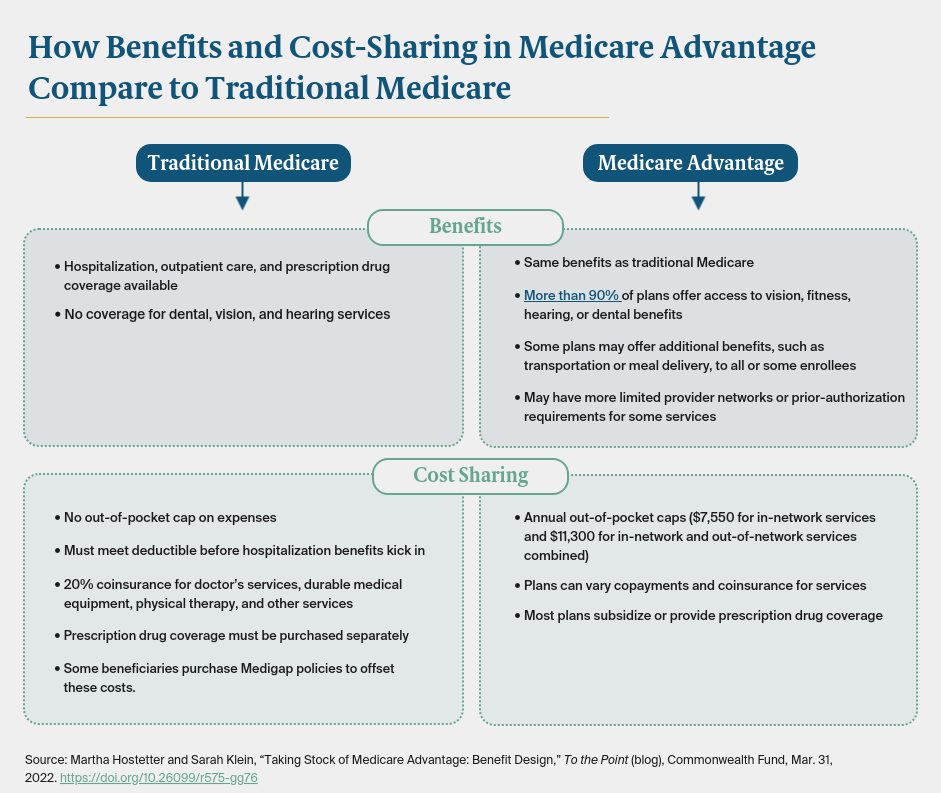 Should There Be Tighter or Looser Restrictions on Cost Sharing?

Traditional Medicare places no cap on beneficiaries’ out-of-pocket spending; those who can afford it purchase supplemental coverage to offset the expense. In contrast, in 2022, Medicare Advantage plans are limited to charging enrollees no more than $7,550 for in-network services and $11,300 for in-network and out-of-network services combined for Part A and Part B benefits. (Medicare beneficiaries who are also eligible for Medicaid are largely shielded from out-of-pocket expenses.) Some plans also pay some or all of members’ Part B premiums, which are not included in the out-of-pocket caps.

Medicare Advantage plans can vary what they charge for specific medical services, unlike traditional Medicare, which has a rigid cost-sharing structure. Private plans may impose a copayment for each day of a hospital stay, for instance, rather than requiring enrollees to meet a deductible before their benefits kick in. Plans may also cover some or all of the cost of prescription drug coverage, which, under traditional Medicare, requires a separate premium.

Despite the out-of-pocket cap, Medicare Advantage enrollees may be exposed to higher costs than in traditional Medicare (e.g., during an extended hospital stay). These costs may not be anticipated or easily determined when enrolling in a Medicare Advantage plan. Some experts wanted to see more standardization in cost-sharing methods to help beneficiaries sort through plan options. Others favored retaining the current flexibility with some oversight. For example, there should be guardrails in place to ensure that plans are not using cost sharing to discourage patients with high-cost conditions from enrolling. CMS also could require plans to flag circumstances in which beneficiaries’ costs could exceed those in traditional Medicare.

One expert suggested giving plans greater flexibility to increase cost sharing for low-value services and argued against standardization, saying it didn’t make sense to create private plans and then constrain what they do.

Is Utilization Management a Problem?

To control costs, Medicare Advantage plans may rely on utilization management techniques like prior authorization and step therapy; the latter requires patients to try lower-cost medications before moving on to higher-cost ones.

Some experts raised concerns about the ubiquity of prior authorization requests, noting they are increasing as more people enroll in Medicare Advantage and are now used even for low-cost services like transportation to medical appointments. The burden of responding to prior authorization requests falls on providers, who argue the requests divert their attention from treating patients and delay necessary care.

A related concern is that plans are using proprietary, algorithm–driven systems to make decisions (including those requiring prior authorization) about approving coverage for services. Some experts wanted to see more regulation — if not an outright ban — on such systems until their validity is established. At the very least, mandating that plans disclose that decisions were made by a computer and not a clinically trained professional and the rationale for a denial is important, one expert said. Another expert called for more granular reporting on denial rates (i.e., by plan and reason) as well as an evaluation of the impact of denials on health outcomes. A 2018 federal audit found that between 2014 and 2016, Medicare Advantage plans overturned 75 percent of prior authorization and payment denials that had been appealed, yet beneficiaries and providers appealed only 1 percent of such denials.

Another expert said CMS could do more to educate enrollees that Part B drugs that are injected or infused in medical settings are also subject to step therapy requirements. It’s likely that many are unaware of this 2018 policy change.