Since the inception of the Medicare Advantage program, the level and structure of payment to plans have been the subject of considerable debate. Does the government’s complex method of paying plans encourage competition or thwart it? Is it producing benefits for taxpayers or just plans themselves? And does it favor some Medicare beneficiaries at the expense of others?

Here’s how the system works. Every year, Medicare Advantage plans submit bids to cover a defined set of benefits — the same ones a beneficiary in the traditional Medicare program receives — for a person of average health in a given county. The bids are compared to a benchmark that’s pegged to projected spending in Medicare’s traditional fee-for-service (FFS) program in a particular county. Benchmarks are higher than FFS spending in areas where FFS Medicare spending is relatively low (typically more rural areas) to attract plans to the region and ensure access. And they’re lower than FFS spending where FFS spending is relatively high (typically urban areas) to promote efficiency. Plans with bids that fall below the benchmark receive a portion of the difference as a rebate that must be used to subsidize premiums, reduce copayments and deductibles, or finance enhanced benefits that traditional Medicare doesn’t cover, such as vision, dental, and hearing services. Plans that bid above the benchmark must charge the excess to enrollees in the form of premiums.

Plans that perform well on Medicare Advantage’s star ratings — a composite score that reflects measures of care processes, care management, beneficiary satisfaction, and administration — can see their benchmark increased by as much 10 percent in some counties; in others, highly rated plans may receive little to no increase because of caps set by the federal government that hold benchmarks to pre–Affordable Care Act levels. Payments also are adjusted based on the health risk of enrollees, with higher payments to plans that document their enrollees are sicker and lower payments to plans with healthier enrollees. The combined effect is that Medicare Advantage plans have been paid more than what traditional Medicare would spend for similar beneficiaries every year since 2003.

Given concerns about higher spending in Medicare Advantage, we asked if across-the-board payment cuts were warranted. Many experts pointed out that it’s important to first reach agreement on the program’s goals. If the primary purpose is to use the private sector to achieve greater efficiency and savings for Medicare, this could be achieved by lowering reimbursements. But if Medicare Advantage is viewed as a tool to provide extra benefits to enrollees, lowering payment may mean taking benefits away. To guard against this, one expert suggested starting modestly with a 2 percent across-the-board payment cut (a recommendation the Medicare Payment Advisory Commission (MedPAC) also has made). The Centers for Medicare and Medicaid Services (CMS) could also set benchmarks by averaging fee-for-service spending at the local and national levels, reforming the system that currently boosts payments to attract plans to counties with the lowest FFS spending. Another expert thought it was possible to implement larger cuts — on the order of 4 percent or more — without harming beneficiaries. 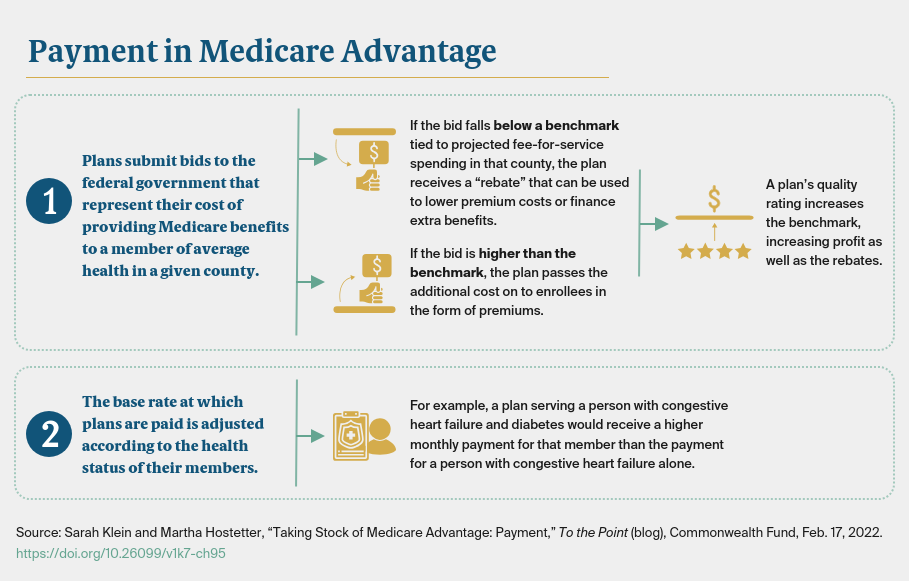 Others were interested in using competitive bidding among plans to bring down payment rates, saying CMS has sufficient information to set benchmarks using plan-submitted information rather than basing them on projected FFS spending. To address concerns that some counties don’t have enough plans to make competitive bidding a viable option, one suggested expanding the geographic regions to include multiple counties or even an entire state.

Even if the existing benchmarking system is retained, many thought counties were too small a unit of measure to set benchmarks. One thought that bundling counties together and requiring plans to serve an entire region might increase competition.

How Should Extra Benefits Be Paid For?

There was no shortage of ideas for reforming this system. One option is to convert rebates to a cash equivalent and give beneficiaries the option of how to use them — from paying down premiums to purchasing personalized supplemental benefits. Another option is to place a financial cap on the actuarial value of supplemental benefits and/or standardize the menu of supplemental benefits available. At minimum, many wanted to see greater transparency around rebate dollars to understand how they are applied and the value of the benefits they are used to purchase. One concern is whether plans are purchasing benefits from entities owned by their plan’s parent company at inflated prices to increase profits.

Disentangling Payment from the Fee-for-Service Program?

Some of the experts we interviewed suggest if we continue to use FFS spending as the benchmarks, we should make sure they aren’t inflated by inefficiencies in the FFS program, including greater use of skilled nursing facilities or institutional care in some regions of the country. Benchmarks also could be adjusted downward to account for the effects of Medigap policies, the supplemental insurance that many people buy to defray the cost of coinsurance in the FFS program. By shielding traditional Medicare beneficiaries from out-of-pocket costs and making them more likely to use medical services, Medigap policies drive up FFS spending and thereby increase benchmarks (and potential profits) to Medicare Advantage plans, as well as extra benefits for those they cover. Another option is to eliminate the benchmarks and have plans compete against one another, as described above.

With more people opting into Medicare Advantage plans, it’s important to use taxpayer dollars responsibly in funding the program. In deciding whether and how to adjust Medicare payment to private plans, policymakers must first be clear-eyed about the goals of the program and then take steps to achieve program — and plan — efficiencies while preserving access and quality of care for beneficiaries.