Risk adjustment is a statistical method that seeks to predict a person’s likely use and costs of health care services. It’s used in Medicare Advantage to adjust the capitated payments the federal government makes to cover expected medical costs of enrollees. This, in turn, helps to ensure a plan’s contracted providers have sufficient resources to care for beneficiaries and don’t have incentives to avoid sicker and more costly patients.

Because higher risk scores mean higher payments, Medicare Advantage plans have financial incentives to thoroughly document beneficiaries’ diagnoses. Providers caring for beneficiaries enrolled in traditional Medicare do not have the same incentives to fully capture diagnoses in medical claims because they’re paid based on services they provide rather than the health status of their patients. This means that Medicare Advantage beneficiaries may appear to have more health conditions than similar beneficiaries enrolled in traditional Medicare, driving up plan payments.

The Medicare Payment Advisory Commission (MedPAC) estimated that in 2020 the risk scores for beneficiaries in Medicare Advantage were about 9.5 percent higher than what they would have been for a similar beneficiary in traditional Medicare, resulting in about $12 billion in excess payments to plans.

This post examines whether the current system fuels overpayments to plans or encourages plans to enroll certain beneficiaries but not others and, if so, what policy changes may be needed to remedy these problems.

While risk-adjustment methodologies may seem arcane, there are big stakes — not just in terms of costs to the federal government, but who benefits and loses. Some research has found that the additional payments driven by risk coding mainly accrue to health plans themselves, in the form of higher profits. The study found beneficiaries also derive some benefit in the forms of reduced premiums and out-of-pocket costs. Higher rebates to plans also enable them to offer extra benefits.

When asked for policies in need of change, all experts pointed to the “coding intensity adjustment” — an across-the-board cut the Centers for Medicare and Medicaid Services (CMS) makes to plans’ payments meant to adjust for the fact that some plans may be coding too intensely. CMS has the authority to raise or lower the amount of this adjustment; it now reduces all plans’ payment by 5.91 percent. Experts view the coding intensity adjustment as a blunt instrument, affecting all plans regardless of their behavior. They noted that even with the adjustment, payments to Medicare Advantage plans continue to be above what CMS spends on comparable beneficiaries in traditional Medicare. 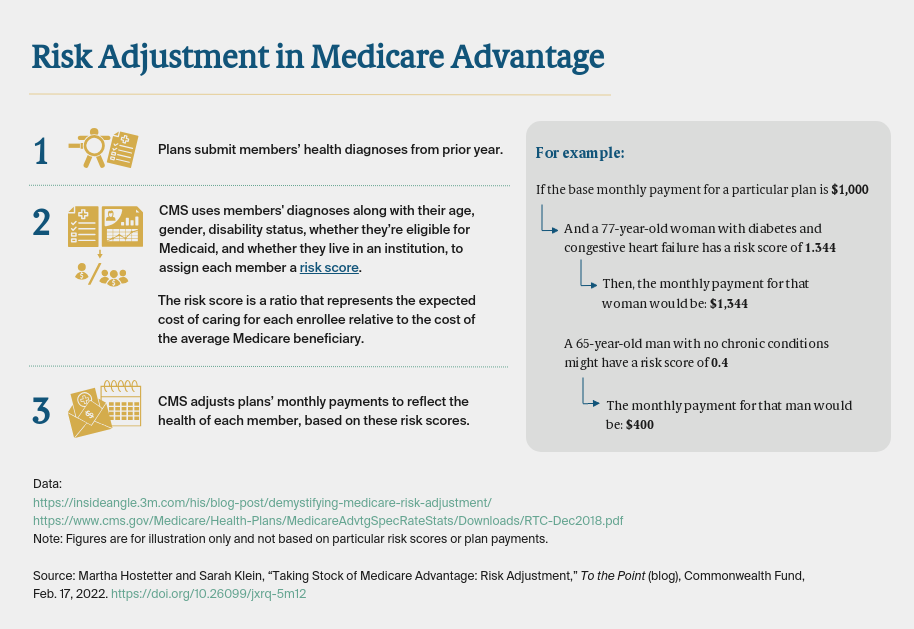 Instead of an across-the-board payment cut, some said there should be targeted efforts. For example, CMS could set a threshold level of coding and audit plans that exceed that threshold to make sure their risk assessments are accurate; research has found variation among plans in terms of their coding levels. One person pointed out this approach could foster competition among plans. Under the current system, new market entrants are subject to a payment cut based on the coding practices of incumbent plans, which puts them at a disadvantage.

Because the current risk-adjustment model relies heavily on past medical spending to determine future payments, a few experts said it could worsen inequities in the system — for example, by underestimating the costs of caring for populations that use fewer services not because they don’t need them, but because they have poor access to medical care. These populations may include racial and ethnic minorities and rural residents living in communities with fewer providers. Without accounting for structural differences in access to care, the risk adjustment may unintentionally be exacerbating disparities.

Not everyone agreed with this: one expert argued the risk-adjustment system incentivizes plans to take on sicker patients, since they may have greater opportunity to code for their conditions, better manage their care, and earn profits.

One way risk adjustment can be improved is by modifying the data on which the model is built.

The experts were divided on whether to make the data more or less complex. Some argued that in an age of “big data,” the model is too simple: it doesn’t account for the severity of enrollees’ medical conditions, how well they function day to day, and whether they have social supports, for example. This could mean that plans may be underpaid for high-risk enrollees and overpaid for lower-risk ones.

But others said it’s important for risk adjustment to be relatively simple and consistent from year to year. While it may be helpful for plans to identify enrollees’ unmet social needs, for example, this information may not be valid for risk adjustment given that the interactions between social circumstances and health are not well understood. One person suggested a modest tweak that could improve accuracy: using two years’ worth of medical claims, rather than one, something also recommended by members of MedPAC. A few experts suggested using different sources of data to determine risk, such as enrollees’ pharmacy use, though one person noted that such a policy could encourage overprescribing.

Several experts noted that CMS has been collecting data on Medicare Advantage enrollees’ medical encounters, documenting the clinical conditions diagnosed and the services received. The agency has begun using these “encounter data,” along with the diagnoses from health risk assessments submitted by plans, for the purposes of risk adjustment.1 Audits by MedPAC have found the encounter data submitted by plans thus far are not complete. Still, several experts said using encounter data — either along with or instead of diagnoses from health risk assessments — could eventually make risk adjustment more accurate and less prone to gaming. For example, some agreed with the MedPAC recommendation that to be counted for risk adjustment, every diagnosis in a health assessment should be associated with some actual treatment delivered.

All agreed that risk adjustment is worth getting right to ensure plans are paid appropriately based on how well they keep members healthy, not how well they code. Giving plans incentives to find innovative ways to help patients, including those with more complex needs, is key to whether the program fulfills its promise.