This year, the average Medicare beneficiary will choose from among 39 Medicare Advantage plans, the highest number in a decade. While a dozen rural counties still have no plans, in certain U.S. markets there are more than 50 plans available. But are beneficiaries able to choose the plan that’s best for them?

The health economists and Medicare experts we spoke with said choosing among plans can be difficult, even for the savviest consumers. First, beneficiaries must opt out of traditional Medicare, then choose a plan type (such as HMO or PPO) and determine what premium levels, copayments, and other parameters meet their needs. Many callers to the help lines run by State Health Insurance Assistance Programs — which most beneficiaries don’t make use of — are confused by basic insurance terminology.

It also can be hard to use Medicare’s Plan Finder to figure out which providers participate in which plans.1 And unlike choosing among Medicare Part D plans, which must cover drugs in all classes, Medicare Advantage plans can differ significantly. For instance, they can offer extra benefits beyond the required Medicare package, like vision or dental coverage, meal delivery, or caregiver support.

Given all this, the experts agreed that most beneficiaries aren’t making informed or active decisions. Instead, many choose plans based on advertising, word-of-mouth, or brand loyalty, then stay with those plans year after year, even if another plan would better serve their interests.

The consequences of not making informed choices are significant. One study found some Medicare Advantage beneficiaries paid up to $1,000 more annually for plans that didn’t offer any more generous benefits or a wider network of providers than cheaper plans. Initially attracted by low premiums, enrollees may fail to notice when a plan exposes them to high costs for hospitalizations or rehab stays — events that may not happen frequently but certainly aren’t unusual in the Medicare population.

When faced with high out-of-pocket costs, some people skip care and jeopardize their health. One study found that when people were defaulted into Part D plans that didn’t cover the drugs they need, many simply stopped taking their medications. 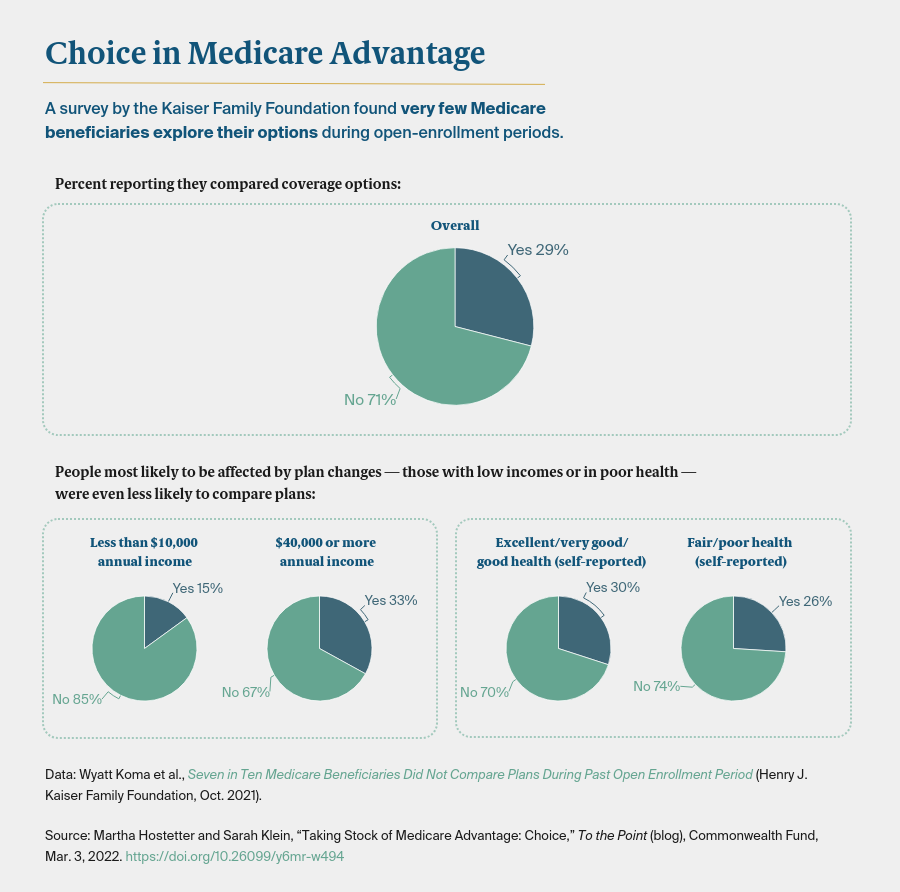 Making It Easier to Choose Wisely

The experts we talked to suggested several ways that beneficiaries could make informed choices, often by following best practices in other industries or other health insurance markets. These include:

A few experts suggested CMS could go further. By actively curating plans, for example, the agency could kick out plans that don’t appear to offer value or meet performance metrics. A forthcoming study (in the Review of Economic Studies) in Oregon’s school districts showed that when some employee benefit managers limited the choices available to workers — offering only plans that provided the best value, on average — those workers ended up with better-value plans than their counterparts who had been allowed to choose from all available plans.

In addition to new guardrails for beneficiaries, the federal government could give Medicare Advantage plans incentives or mandates to be proactive in helping enrollees understand their benefits, some experts said. For example, along with getting the annual notices that alert them to plan changes, enrollees could receive customized communications from their plan explaining the changes in simple terms. These messages could say something like, “We know you’ve seen Dr. Smith this year, but she is no longer in our network,” or “You paid $25 copays for each of your five specialty visits this year. These copayments will go up to $75 next year.”

As the Medicare Advantage program continues to grow, changes like these will be needed to ensure that its enrollees are able to make informed choices that deliver value for them and for the government.